It takes a lot of cash to run an internet TV service that entertains 100 million subscribers around the world. By the time it closes the books on 2017, Netflix (NASDAQ: NFLX) will have spent about $8 billion, up from $6 billion in the prior year.

The cost of acquiring content is easily the biggest piece of the that annual cash outlay. But Netflix’s soaring spending on its original shows, which is now up to a $1.5 billion annual pace, tells investors all they need to know about management’s priorities as the service enters its second decade of existence.

Netflix tiptoed into the self-produced content business, but from the beginning CEO Reed Hastings and his team knew it had potential. “We believe Feb. 1 will be a defining moment in the development of Internet TV,” they said two weeks before they released the first season of House of Cards to kick off the originals program in early 2013.

Until then, Netflix’s portfolio was restricted to older movies and prior seasons of popular TV shows that it licensed from other content owners. The key benefit of original shows is that, because they’re exclusive to the streaming service, the content should help attract and retain members.

It turned out to be a smart bet.

Just four years after starting this experiment, Netflix series are some of the most popular and most acclaimed programming on TV. Stranger Things was the top trending show in 2016, according to Google. And Netflix was nominated for 20 prime-time Emmy awards in 2017. It even took home a few wins, including for Black Mirror , The Crown , and Master of None .

The impact on the business

Awards are nice for the brand, but the real business payoff has been in spiking user growth. In fact, whenever Netflix blows past its quarterly subscriber targets, as it did several times in 2017 , there have usually been a group of exclusive shows to credit. After adding a record 5.3 million members in the third quarter, for example, management cited “strong appetite for our original series and films” to help explain why growth was so far above the 4.4 million they had predicted.

It’s also clear that the growing portfolio of exclusive content is convincing users to stick around even as Netflix hikes its prices. The average user is shelling out more each month thanks to a mix of price increases and the uptake of expensive high definition and multistream plans. Yet subscriber growth continues to accelerate.

This is the future

Netflix is paying a price for its increasingly aggressive bet on original content. Since these shows require an upfront cash investment, the strategy puts intense pressure on cash flow. In fact, the company is on pace to burn through as much as $2.5 billion of cash this year. 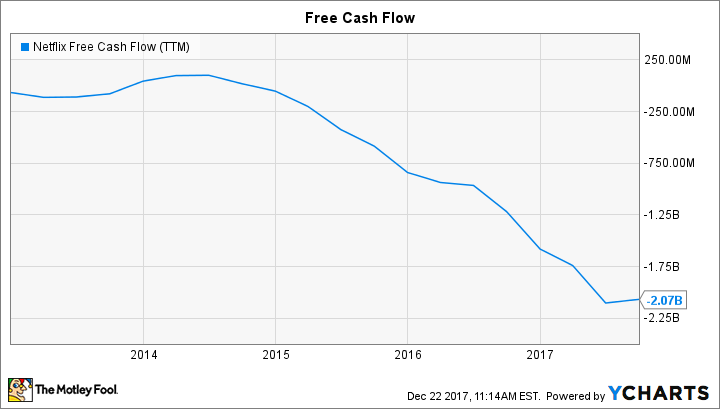 Netflix should have no problem earning a return on that investment in future years once the shows and movies finish production and begin hitting its servers. In the meantime, though, the company needs to load up on debt to support this initiative.

The overall streaming service turned 10 years old in 2017. Netflix’s original content strategy is just half that age, yet represents management’s biggest priority. “Our future largely lies in exclusive original content,” Hastings said in his third-quarter letter to shareholders. Investors shouldn’t be surprised to see this expense category jump beyond the $1.5 billion mark. Given the return that the company is enjoying from it, it’s also likely to take up a bigger proportion of overall content spending than the 25% it accounts for already.

10 stocks we like better than Netflix
When investing geniuses David and Tom Gardner have a stock tip, it can pay to listen. After all, the newsletter they have run for over a decade, Motley Fool Stock Advisor , has tripled the market.*

David and Tom just revealed what they believe are the 10 best stocks for investors to buy right now… and Netflix wasn’t one of them! That’s right — they think these 10 stocks are even better buys.

How to Use Bitcoin.com’s New Point-of-Sale Solution — Bitcoin Cash Merchant

What Does the End of the Quarter Mean for Portfolio Management?

7 Ways to Get Out of Paying Your Student Loans (Legally)