We Fools are stock market junkies, but we realize that not everyone has the time or desire to build their own portfolio from scratch. That’s why we are huge proponents of index funds, which offer investors one-stop shopping, instant diversification, and a low fee.

Get the whole world in one fund

Dan Caplinger (Vanguard Total World Stock): Most U.S. investors focus almost exclusively on domestic stocks in their portfolios. That’s a natural inclination since the companies with which you’re most familiar are the ones that you encounter regularly in your everyday life. But if you rely solely on U.S. stocks, you’ll miss out on some of the hottest growth prospects in the market, many of which you can only find by venturing beyond borders.

Vanguard Total World Stock provides an all-in-one investing option for retirement investors looking for exposure to the global stock market. Despite its cosmopolitan bent, the ETF has 55% of its assets invested in North American stocks, the majority of which are U.S. names with which investors will be quite familiar. Beyond that, though, you’ll get about 20% of assets in European stocks, with another 15% allocated to the Asia-Pacific region and 10% in emerging markets. All told, the ETF holds almost 8,000 different stocks, making it one of the most diversified fund choices in the ETF universe.

In recent years, U.S. stocks have largely outperformed their international counterparts. In some investors’ eyes, that puts foreign stocks at an advantage going forward. That could make Vanguard Total World Stock a timely pick in an increasingly turbulent environment for the U.S. stock market.

It’s worth paying a little more for this software ETF

Brian Stoffel (PowerShares Dynamic Software ETF): I don’t invest in ETFs. Spending all day researching and writing about individual companies, I prefer to put my skin on the players I think are best positioned to outperform over the long run. Most people, however, don’t have that kind of time and prefer to invest via ETFs. Nine times out of 10, I suggest picking a fund with uber-low expense ratios — usually less than 0.20% per year.

But for this Dynamic Software ETF, I’m breaking my rules. The expense ratio isn’t outrageous, at 0.63%, but it’s still higher than I like. The reason I choose it is that it invests in 30 stocks that have largely adopted a business model I can’t get enough of: cloud computing , specifically software-as-a-service (SaaS). In plain English, this means customers pay recurring monthly revenue to use software that’s hosted in the cloud — no hardware sales are involved. Updates to the software can happen seamlessly and in real time, and the revenue is sticky and has high switching costs.

The ETF’s biggest investments are in behemoths like Microsoft and Activision Blizzard , but almost half of the ETF has small-cap growth stocks with huge potentials, like Paycom , A ppFolio ,and The Trade Desk (NASDAQ: TTD) . It should be noted that with such a concentrated portfolio — 30 stocks isn’t many for an ETF — and a collection of stocks that are fairly expensive by traditional metrics, this could be a volatile investment. That said, I think it could be a very profitable one for patient investors with a long-term time horizon.

Brian Feroldi (Guggenheim S&P 500 Equal Weight ETF): The S&P 500 is the gold-standard index fund, and for good reason. This index holds 500 of most profitable companies in the U.S., and it has produced wonderful returns over the long run.

I’m as big of a fan of the S&P 500  as the next guy, but I often wondered if the index’s capitalization-weighted approach is the best strategy. After all, small caps tend to outperform large caps over the long term, so why is the S&P 500 so heavily concentrated in large caps?

To see what I mean, consider Apple (NASDAQ: AAPL) . It’s the largest component of the S&P 500 and it currently holds a weighting of about 3.57%. That’s roughly the same weighting as the bottom 100 companies combined . For S&P 500 investors, that means the future performance of Apple matters just as much as the performance of those other 100 companies.

To fix this problem, Guggenheim launched an equal-weight S&P 500 index fund in 2003. This fund holds the same 500 companies as the famous index, but it rebalances itself quarterly so that each component maintains a 0.2% weighting.

This difference between the equal-weight fund and the S&P 500 may seem trivial, but a look at the long-term data tells a different story. 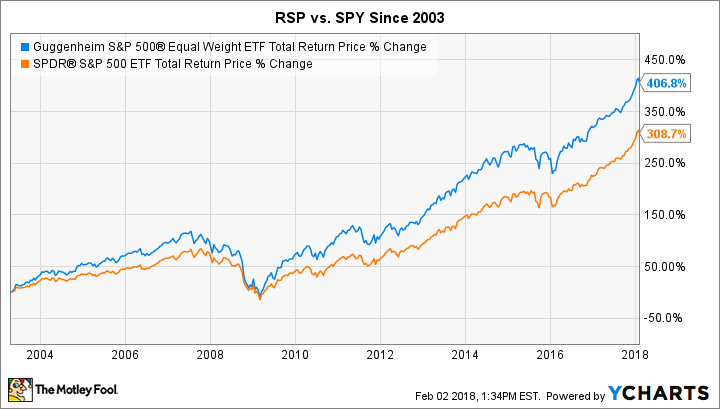 If you’re looking for a set-it-and-forget-it index fund that can perform over the long run, then the Guggenheim S&P 500 Equal Weight ETF could be for you.

10 stocks we like better than Rydex S&P Equal Weight ETF
When investing geniuses David and Tom Gardner have a stock tip, it can pay to listen. After all, the newsletter they have run for over a decade, Motley Fool Stock Advisor , has tripled the market.*

David and Tom just revealed what they believe are the 10 best stocks for investors to buy right now… and Rydex S&P Equal Weight ETF wasn’t one of them! That’s right — they think these 10 stocks are even better buys.

In Tax Overhaul, Trump Tries to Defy the Economic Odds

Why Strong Growth Is a Headache for the European Central Bank

Bonds Running Into Same Rate Floor Ahead of Fed

Campbell and Hershey’s deals mean the market still has upside