The benchmark 10-year Treasury yield is on the verge of breaking 3 percent and is likely to go higher from there, taking interest rates on mortgages and a whole range of business and consumer loans higher with it.

The reasons behind the move include expected Fed interest rate hikes, rising inflation and global growth. But the U.S. government also is going to take on more debt to pay for widening deficits. The new tax law is expected to add $1.9 trillion to the deficit over the next decade. As that debt pile grows, interest rates, which rise when bonds sell off, could continue to go higher.

Analysts say the 3 percent level is simply psychological, but the factors that have pushed rates toward it could linger, with some forecasting the 10-year reaching 3.25 percent over the next couple of months.

The potential counterweights that could cap the 10-year yield would be a negative stock market reaction that drives investors to bonds, lower interest rates outside the U.S. that make the U.S. debt relatively more attractive and good demand for longer-dated securities from insurers and others.

“There are still higher rates from here than what we have seen in a decade,” said George Goncalves, head of fixed-income strategy at Nomura. “Many traders have not seen this type of behavior and what it might mean for other assets. We don’t know.”

The market’s focus on government debt supply comes as the Treasury auctions $96 billion in notes this week and $274 billion in short-term bills. The market also awaits a Treasury announcement next week that should clarify some of its future borrowing needs.

Goncalves said last year the government issued $540 billion in Treasurys, not including bills, and this year, it is likely to cross $1 trillion. He expects a 3.25 percent 10-year at year-end, but in the meantime, it could run above that level to 3.40 percent or so before backing down.

“The fact the 10-year is getting a magnetic pull towards 3 percent and going higher is being driven by better growth and the higher inflation that comes with it, and all the debt that’s needed to finance the growth,” he said. “They’re feeding on each other, and it’s going to create this cycle of higher rates until they get too high and compete with financial markets or other financial instruments.”

Next week, the Treasury will announce how much debt it needs to issue next quarter to fund the government.

“It could be a big deal on May 2,” said William O’Donnell, Citigroup rates desk strategist. “They’re going to give us some guidance on every issue. What we think they’re going to deliver is that every issue all across the curve [is] going to increase by a billion. They just announced the CBO [projections], and the March deficit numbers were much worse than expected.” 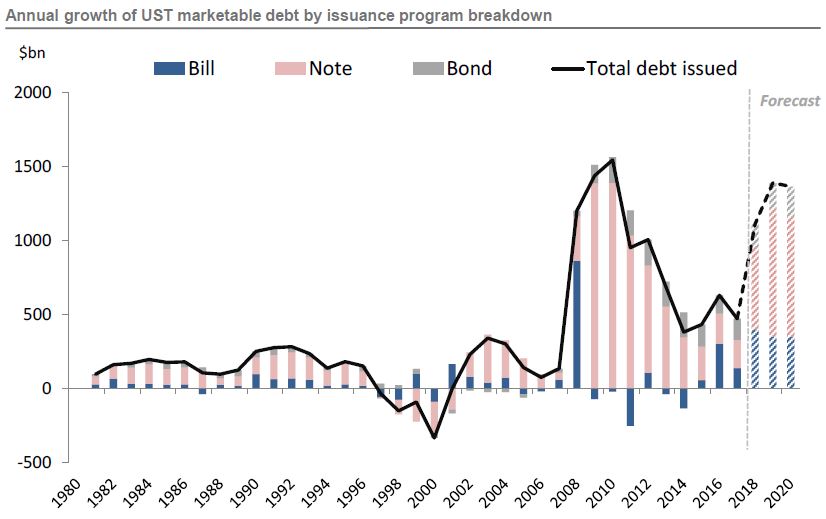 “It’s the double whammy of growth and inflation and the deficits to pay for it,” said David Ader, the chief macro strategist at Informa Financial Intelligence. “We’ll start to see what they’re going to be doing. Small increases in issuance — a billion here, a billion there. We are still talking about the tip of an iceberg.”

Ader said he also expects to see the 10-year reach 3.25 percent. Its climb could stall after that if investors sell stocks in reaction, as they did in February. That could mean yields move higher in fits and starts. The Treasury market often becomes a safe haven from falling stocks and that pushes yields lower.

Sam Stovall, chief investment strategist at CFRA, said the stock market response will depend on how quickly rates climb. “It depends on its ascent. I would rather it walk than run,” he said.

The Fed is helping the process of moving toward more normal interest rate levels by winding down its balance sheet, slowly releasing the air from the balloon, he said.

“Since 1948, the average difference between the year-on-year change in inflation and fed funds has been 1.3 percentage points. If today we renormalized the fed funds rate, it should be 3.4 percent. In addition, the 10-year yield should be a percentage point higher,” said Stovall.

But even as the market adjusts to the next level of yields, there will be more government debt for the Treasury market to deal with.

“When we look at $1 trillion dollar budget deficit in 2019, then each auction announcement is going to be somewhat incremental, adding and adding to the story,” said Ader. “You’re not going to have auction announcements saying we’re adding $5 billion to the 10-year, but it will be death by a thousand cuts. But we know it’s coming.”

As the 10-year yield began to really break out last week, the focus was also on the yield curve that had been getting flatter and flatter to a 2007 low. The yield curve is the span of rates across the range of Treasury securities of different durations. A flatter curve, when the 2-year yield, for instance, rises closer to the 10-year, could signal a weakening economy in the future. An inverted curve, where the 2-year yield rises above the 10-year, is viewed as a precursor to a recession.

But O’Donnell said the Treasury’s issuance could actually make the curve steepen, meaning the short-end and long-end yields could move further apart. That would be a healthier sign for the economy.

The Top Three Financial Centres in the World

Dallas home prices up 7.1% from a year ago

Developers Fight Efforts to Make Them Pay for Public Art

Home Equity Preferences as a Factor of Age and Race

3 Lung Cancer Stocks That Could Soar in September