Morgan Stanley analysts analyzed 400 companies’ comments on costs in second quarter earnings transcripts. “Compensation, commodity, and transportation costs were mentioned most frequently…Tariffs came up less often and were consistently discussed in a ‘wait and see’ framework. 45% of S&P 500 companies mentioned at least one cost headwind, and data shows that this trend has been on the rise.” 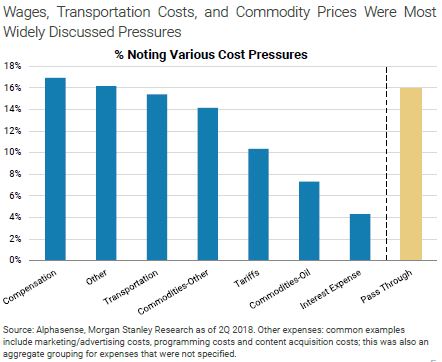 In a note titled, ‘No margin for error,’ Wilson said companies are optimistic that they can pass on higher costs. “According to consensus, 2019 will be the third consecutive year of margin expansion at the benchmark level,” notes Wilson. “We find that hard to believe. Margin estimates for the following calendar year are typically revised lower over time, but the decline in 2019 estimates has been relatively modest thus far in 2018 (-0.7% from January through September vs. the 7-year average of -1.7%).” 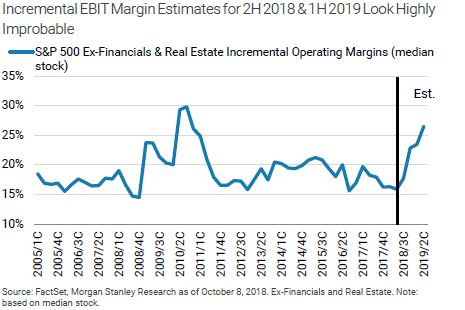 Based on Morgan Stanley’s study, companies in the transportation sector, tech and consumer discretionary were found to have high profit margin risk but also have had optimistic expectations and valuations. On the other hand, companies in the food sector, beverage and tobacco and some health care companies have low margin risk and relatively pessimistic expectations—a much more positive combination for investors.

“When inflation expectations are rising, things like energy, financials, materials outperform and growth areas of the market, like tech, consumer discretionary and the new communications services underperform,” Calvasina said.

Topping Morgan Stanley’s list of margin concerns are rising wages, with average hourly earnings growth expected to rise by Morgan economists to 3.3 percent next year from 2.8 percent currently. Other factors include expected gains in energy and other commodities prices; freight cost inflation, and higher interest rates. The costs from the rising U.S.- China trade conflict have not been priced in and the impact is still unclear.

“We’ve been worried about the reporting season. We didn’t expect this technical unwind” in stocks, she said. “But we felt we were where the market need to be, at its recent highs…we were really just telling people not to chase. We were telling people there would be a better entry point.”

Morgan Stanley expects earnings growth of just five percent next year, just half of Wall Street’s consensus of 10 percent. This year, analysts expect earnings to grow by 23 percent, according to Thomson Reuters.

66% of Funding to Stop the AI Apocalypse Comes from Crypto...

Brian D. Evans on the Challenges of Marketing in the Blockchain...

Stable, solid, but are Germany’s banks prepared for coming challenges? –

How Did Carl Icahn Get Rich?