The rebound will be short-lived, says Ari Wald, head of technical analysis at Oppenheimer.

“We think there’s a turn coming for the semis. Unfortunately, I think that turn is lower,” Wald said on CNBC’s “Trading Nation” on Monday. “This group has had a terrific run over the last two years. … For much of the several last recent quarters, it’s been in the process of topping.” 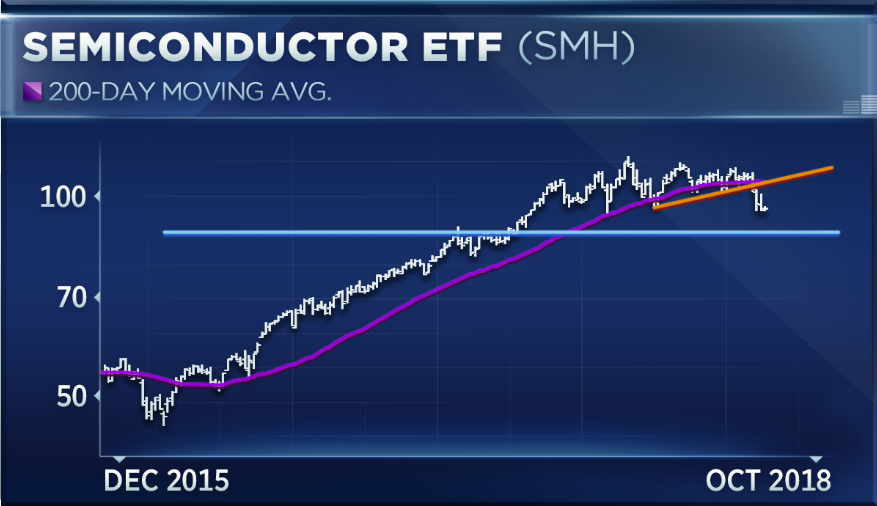 The SMH ETF nearly doubled from 2016 to 2017 before hitting turbulence this year. Over the past month, no SMH component has seen any gains, while some of its stocks, such as AMD, Microchip Technology and Applied Materials, have fallen by double-digits.

“You can see it in the ETF’s 200-day moving average. That moving average is now taking a lower drift, so we think this group is likely to get worse before they get better. We see downside risk in this ETF to $88,” said Wald.

A move to $88 represents an 8 percent drop from current levels, a decline that would sweep it 23 percent from its 52-week high set in March. The ETF has not traded at that price in more than a year.

However, Michael Binger, president of Gradient Investments, says recent sell-offs have been overdone and there is now opportunity to find some discounts.

“Two stocks I like here that have been beaten down to very low levels are Intel and Broadcom. I like these stocks because they produced a lot of cash, they have good balance sheets,” Binger said on Monday’s “Trading Nation.” With Intel, “you get a good yield and it’s cheap. … Broadcom I like a lot. I think it’s a mispriced stock.”

Intel has fallen 2 percent in the year to date, while Broadcom is down 11 percent. Intel is scheduled to report earnings on Thursday.

This is What Bill Gates’s Portfolio Looks Like (BRK.B, MSFT)

Are Targeted Ads Stalking You? Here’s How to Make Them Stop

EU Watchdog Will Evaluate ‘Every’ ICO for Potential Regulatory Push

5 Questions to Ask When Your Credit Score Drops

OCC Hosts Miami Workshop for Board Directors and Bank Management

Snap has more than doubled, but one investor says don’t believe...