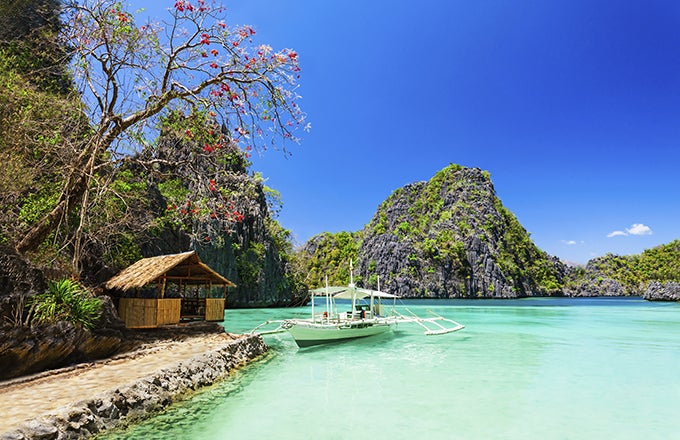 Are you wondering whether a tropical retreat on one of the islands of the Philippines might be the best retirement choice for you? There’s a lot to consider when you’re planning such a significant life change. We take a look at six of the most critical issues: visas, income requirements, cost of living, where to live, housing and healthcare. And given the recent anti-drug violence in the Philippines and travel warnings about safety, we are adding a note about security issues, as well.

The good news is that the Philippines will welcome you with open arms. The government even has a special section of the tourism department to help you get settled as a retiree in the Philippines called the Philippine Retirement Authority, which provides assistance throughout your stay. English is a widely-spoken second language; in fact, the BBC reports that teaching English is a major industry in the Philippines, which houses many call centers that serve U.S. businesses.

The Philippines is one of the top 25 best places to retire on International Living‘s 2018 Global Retirement index.

The one big-ticket item: Gas. At roughly $3.41 a gallon, it can get very expensive to own and drive a car. But as long as you choose to live in a city, a car is not essential; taxis, buses and bikes will take you where you need to go.

Once you have committed to retiring in the Philippines, the first thing to do is apply for a Special Resident Retiree’s Visa (SRRV). The most popular variety is the SRRV Classic. As long as you are 50 years or older, the visa requires you to deposit into a bank in the Philippines either $10,000 if you have a guaranteed monthly income – or $20,000 if you don’t have a regular stipend. This deposit covers the retiree and two dependents.

The good news: The $10,000 can be used toward the purchase of a condo or townhouse, or for a long-term housing lease. However, in order to use the $10,000, the total amount of your investment in the Philippines must be at least $50,000.

If more than three of you will be moving to the Philippines, there is an additional $15,000 per dependent. You will need to show proof of the pension, which must be at least $800/month for a single applicant or $1,000/month for a couple. Social Security income counts as a pension for this requirement; the annual letter you get from the Social Security Administration stating your benefit amount is sufficient proof.

The initial application fee is $1,400 for the principal and $300 for each additional person, including spouse and dependents This is a one-time payment. After the first year, the annual fee to renew the visa will be $360 and will include the principal, spouse and one child. If you have more dependents, they will cost $100 each.

Other types of SRRV visas are available for people looking to move to the Philippines at a younger age (retirees can be as young as 35!). There is also a special retirement VISA for former diplomats.

In addition to a visa, you will also need to get an ACR I-card (ACR stands for Alien Certificate of Registration). It has a microchip, contains bio-metric data and has a photo, your visa type and other information including your fingerprints. It costs $50, has to be renewed annually and serves as a reentry permit.  However, it is not a substitute for a valid passport with a visa stamp; you need both of these too.

As discussed above, you must have a regular retirement income to qualify for the SRRV Classic Visa, and Social Security income does count. In fact, the Philippines is one of the countries that has U.S. Embassy staff trained to help you with Social Security services.

While you can have a check sent to the Philippines and pick it up at the embassy (you may need an appointment to do so), you are much better off maintaining a U.S. bank account into which your benefit can be deposited directly. You can then transfer funds to a Philippine bank. Even better, you can get a direct deposit of your Social Security check sent to a local bank account.

Finding the best place to live is a highly personal choice. There are 80 provinces, 17 regions and 138 cities in the Philippines; some have more appeal than others. The website Top-Destination-Choice-The-Philippines.com lists the top 20 cities in alphabetical order. Cebu City and Metro Manila, both on the list, are the only two cities with Joint Commission-accredited hospitals. If you choose to live a distance from an accredited hospital, be sure to have access to transportation that can get to the hospital quickly. Many rural clinics do not have a doctor on staff – only nurses.

The website Overseas-Filipinos.com also has information on top retirement locations.

You Can Rent, But Not Always Buy

Renting with short-term leases may be a good option for you until you find just the right place to live. The problem will arise when you decide you want to buy something (and take advantage of the ability to use that $10,000 visa fee, if the place is expensive enough). If you are are retiring on an SRRV visa, you can buy a condo or townhouse, but not a fully detached house. That sort of real property can only be bought by a Philippines citizen.

Buying a townhouse or condo in the Philippines is similar to buying real estate in the U.S. The real consideration is location, location, location. While you may dream about living on a small island, think about whether it will give you easy access to commercial districts that include malls, grocery stores and other modern conveniences. This is another reason to rent before buying in communities you are considering.

Healthcare can be a more difficult issue to resolve. Traditional Medicare is not accepted at Philippine hospitals, though some Medicare Advantage plans do include coverage outside the U.S. They vary on a state-by-state basis, so research your home state to find out if that option exists for you.

On the plus side, medical services cost much less in the Philippines and you can buy local insurance or sign up for PhilHealth (the governmental health benefits). Don’t be surprised if you are asked to pay for medical care at the time you receive it. If you are eligible for Veterans Health Administration medical care, you can seek out U.S. VA clinic in the Philippines.

As mentioned above, modern medical facilities with Joint Commission International accreditation are only available in Metro Manila and Cebu City. Some US retirees travel back to the US if they encounter major medical needs. You don’t lose your Medicare when you are outside the U.S.; you just can’t use it to cover services unless you have arrangements through a Medicare Advantage Plan.

In making plans, retirees should also be aware of the recent increase in violence in the Philippines, resulting from the campaign against drugs launched since President Rodrigo Duterte came to office on June 30, 2016. The campaign has resulted in reportedly more than 7,000 deaths (more than 30 per day, according to news reports).

There are other security issues, as well, with some regions of the Philippines posing a greater risk than normal because of continued violence linked to insurgency and terrorism. Recent reports specifically cited the Sulu Archipelago, the island of Mindanao and the southern Sulu Sea area. Other regions in the Philippines are generally considered as safe as other places in Southeast Asia  Anyone thinking of traveling to or retiring in the Philippines should review the most recent U.S. State Department Philippines Travel Advisory.

You can definitely retire more cheaply in the Philippines, but you will face different kinds of problems, such as limitations on purchasing a residence if you are not a Philippine citizen. You also may not be able to access the type of healthcare you want. And you need to be aware that some regions are currently considered unsafe.

The good news is that you will find a welcoming government that will encourage you to choose the Philippines as your retirement destination. it makes sense to take several vacations there at different times of the year – and in areas you may be considering – before making the final decision to relocate.

This is What Bill Gates’s Portfolio Looks Like (BRK.B, MSFT)

How Silicon Valley Came to Be a Land of ‘Bros’

Avocados would likely get more expensive under Trump’s Mexico tariffs