Forecasts of a more extended November cold snap across the U.S. sent natural gas prices to a near two-year high, as investors worry about rising demand at a time when supplies are at the lowest level to start the winter heating season in 15 years.

Natural gas futures for December spiked more than 6 percent to $3.76 per mmbtu, the highest price since December, 2016.

“We added a lot of heating demand over the last week,” said Jacob Meisel, chief weather analyst at Bespoke Weather Services. “This morning, there are more risks that the cold is going to linger a bit longer through November, not at the same intensity but it’s enough to scare a market that has low storage levels and already has strong physical prices.”

Meisel said colder than average weather is expected from the Midwest into parts of the Northeast and East Coast. “It looks like around November 16 to 17 we finally see the cold move out, but now there’s one more system that could keep cold weather on the East Coast. There’s still disagreement on the long range,” he said. 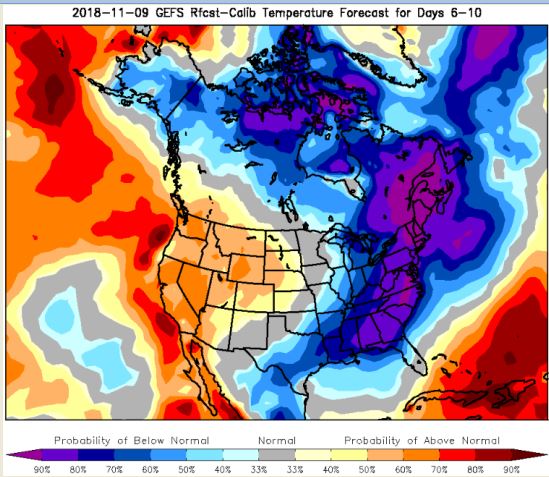 “I think we’re looking at the potential for shortages towards the end of the season, depending on how the winter goes,” said John Kilduff, partner with Again Capital. In recent years, the U.S. has started the heating season with record supplies that were largely depleted by the end of the season.

Kilduff said, however, the amount of gas in storage this year at the Nov. 1 start of the winter heating season is unusually low. The last time supplies were this low in the first week of November was in 2003, and that year natural gas prices hit $12 per mmbtu. 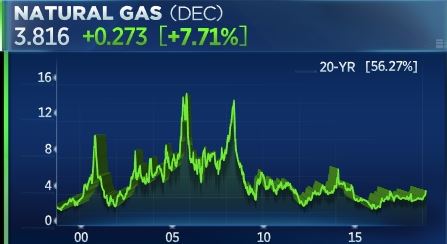 “Now we’were going into the winter 15 percent in the hole, and prices could double or triple from here,” said Kilduff. He said gas prices could easily cross the psychological threshold of $4 per mmbtu for the first time in two years.

December may offer a reprieve. Meisel said the weather outlook is still unclear, but as of now December is not expected to be that cold. “Most seasonal forecasts, including my own, show periods of warm temperatures, especially in December,” he said. “The cold may come back in January and February, but I’m still pretty confident that risks in December are to the warmer side.”

Analysts say one reason for the low gas supplies is the fact that the warm weather stretched longer into the fall, requiring extended air conditioning usage across the country. There was no gap between the hot weather and the arrival of cooler weather, which required heating systems to be turned on.

“It’s all because of that weather,” said Meisel. Production levels remain near record highs, and if the weather stays warmer, gas in storage could be increased, he said.

“This is the first winter in several years that we haven’t started with a record amount of gas in storage,” Kilduff said. He said the deficit is also due in part to the fact that the U.S.’ natural gas bounty has led to exports, as both liquified natural gas and gas through pipelines.

WATCH:Here’s what drives the price of oil

Atlassian Breaks Down From Support After Mixed Guidance

Your mortgage bill will cost you more in these cities |...

Apple Inc. Is Set to Buy a Lot of OLED Displays...