We focus on the long term and the medium term.

While the bull market could keep going on, the long-term risk:reward no longer favors bulls. Towards the end of a bull market, risk:reward is more important than the stock market’s most probable long-term direction.

Some leading indicators are showing signs of deterioration. The usual chain of events looks like this:

*All economic data charts are from FRED

Housing remains in a downtrend, with New Home Sales still below its 12-month moving average. In the past, New Home Sales trended downwards before bear markets and recessions began.

The labor markets are no longer improving. Initial Claims, Continued Claims, and the Unemployment Rate are trending sideways.

In the past, Initial Claims and Continued Claims trended higher significantly before bear markets and recessions began. This has not happened yet, but is something to watch out for throughout 2019

The 4-week moving average of Initial Claims is trending higher. This is noticeably different from the rest of this economic expansion, in which Initial Claims was continuously falling.

To calculate the trend in Initial Claims, we can look at the 4-week average’s 6-month rate-of-change.

This rate-of-change has risen for 10 consecutive weeks, while Unemployment is under 5% (i.e. late-cycle cases).

Historically, this is not a good combination for stocks , especially 6+ months later.

Banks’ Lending Standards have tightened a little in the most recent quarter. This is important, because credit is the lifeblood of the U.S. economy. One data-point does not make a trend, so this is not yet a long-term bearish factor. But if Lending Standards continue to trend higher throughout 2019, long-term bulls should watch out.

The yield curve continues to flatten and is close to completely inverting as the stock market rallies.

For reference, here’s what happens next to S&P 500 when the 10 year-2 year yield curve inverts for the first time in each economic expansion.

Here’s what happens next to S&P 500 when the 10 year-3 month yield curve inverts for the first time in each economic expansion.

Yield curve inversions typically occur before bull markets end. This is something that long-term bulls should watch out for in 2019 as the entire yield curve inverts .

The 6-month rate-of-change in Retail Sales is now negative.

As you can see, Retail Sales have fallen a little over the past 6 months.

Here’s what happens next to the S&P when Retail Sales’ 6-month rate-of-change falls below -0.5%

This is somewhat of a worry for the stock market. I am not extremely worried about this because the trend in Retail Sales is more important than its 6-month rate-of-change

Heavy Truck Sales have made a new high for this economic expansion.

This is a late-cycle sign for the bull market and economic expansion. Here’s what happens next to the S&P when Heavy Truck Sales exceeds 540k 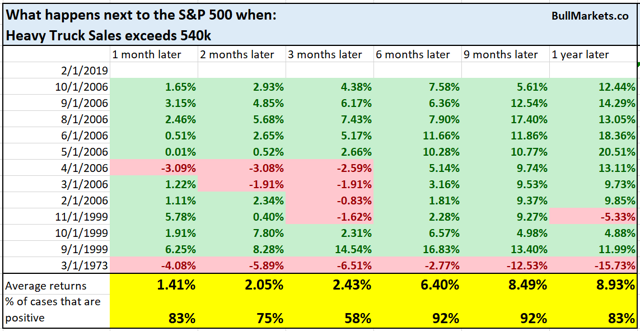 Notice how these are all late-cycle dates.

Conclusion : The stock market’s biggest long-term problem right now is that as the economy reaches “as good as it gets” and stops improving, the long-term risk is to the downside.

Economic deterioration is not significant yet, so the “bull market is over” case is not clear right now. We’re in a “wait and see the new data” mode. As long as the economic data doesn’t deteriorate significantly, the bull market case is still valid.

The end of a bull market is always very tricky to trade. The stock market can go up a lot in its final year, even if the macro economy is deteriorating. That’s why it’s better to focus on risk:reward instead of trying to time exact tops and bottoms. Even when you think the top is in, the stock market could very well surge for 1 more year.

*For reference, here’s the random probability of the U.S. stock market going up on any given day, week, or month.

The S&P 500 has “decoupled” from the 10-year Treasury yield. This has some traders on edge. 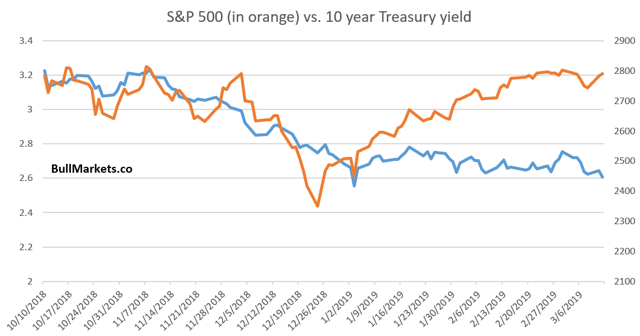 In reality , this is completely normal and is not consistently bearish for stocks. Here’s what happens next to the S&P when it goes up more than 13% over the past 50 days, while the 10-year yield’s % change is less than -5% 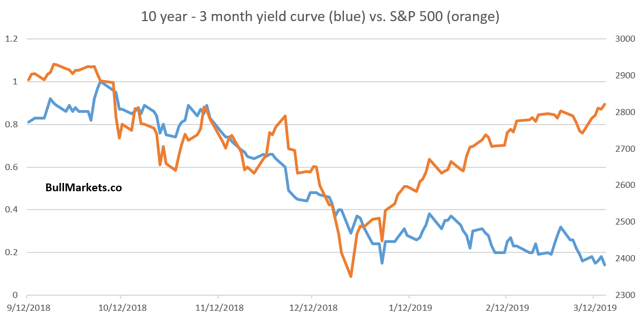 And once again, this is not consistently bearish for stocks, especially 6-12 months later. 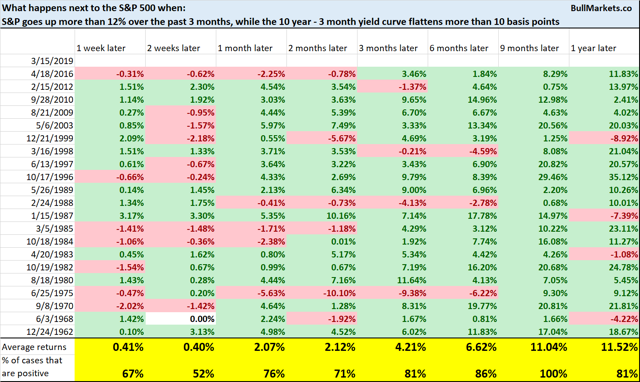 VIX continues to make new lows for this year. VIX is now below 13. 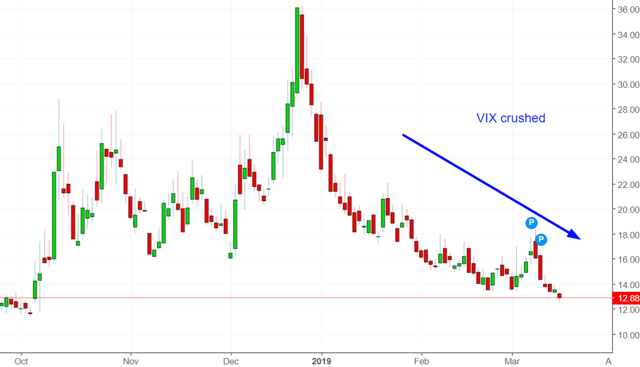 Here’s what happens next to the S&P when VIX closes below 13. 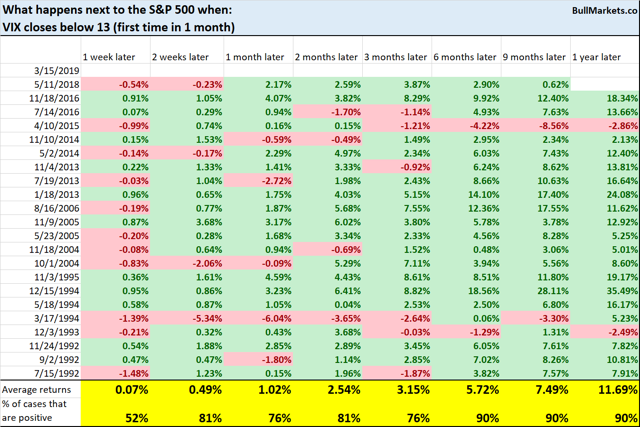 Once again, this is good for stocks 6-12 months later.

Since the start of January 2018 , bank stocks have significantly underperformed tech stocks. This is a bit of a worry because this is how the 2000-2002 and 2007-2009 bear markets started. 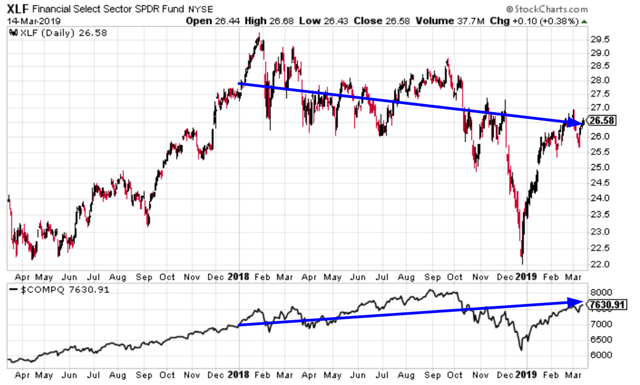 Here’s what happens next to the S&P when the KBW Bank Index falls more than -7% over the past 300 days while the NASDAQ goes up more than 10%.

As you can see, this starts to become a problem for stocks 1-2 years later.

Here’s what happens next to the S&P when XLU is up 8 weeks in a row.

Here’s what happens next to XLU.

The stock market’s short term has a slight bearish lean, but once again with the caveat that the short term is always extremely hard to predict. Focus on the medium to long term.

Tech stocks are leading the rally, and the NASDAQ has now gone up 11 of the past 12 weeks.

Here’s what happens next to the S&P when the NASDAQ goes up at least 11 of the past 12 weeks. 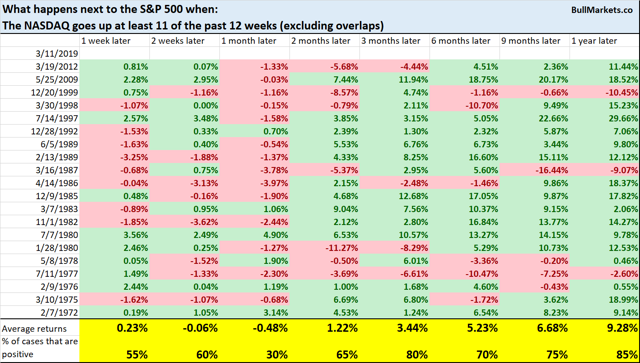 There is a slight short-term bearish bias for stocks over the next 1 month.

Growth stocks have significantly outperformed value stocks since January 2018. Here is the S&P 500 Value Index vs. the S&P 500 Growth Index 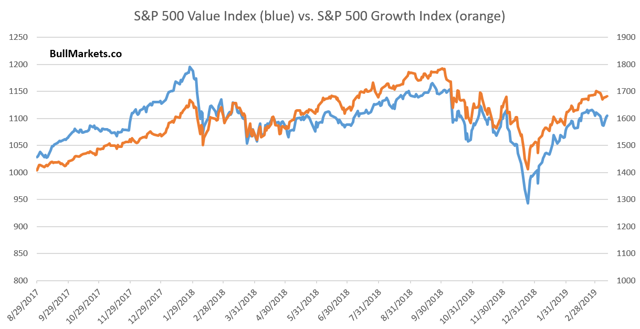 There is a short-term bearish bias for the S&P, but nothing more.

Here’s what happens next to Value.

Here’s what happens next to Growth.

Here is our discretionary market outlook:

3 Stocks to Buy in the Second Quarter

Amazon Prime rate bump is a clarion call to buy the...

How the Underground Economy Affects GDP

3 Reasons Aurora Cannabis Will Dethrone Canopy Growth as the Largest...

The Sears Bankruptcy Killed This REIT’s Earnings, But Not Its Long-Term...