Netflix is set to report earnings after the bell Tuesday.

BK Asset Management’s Boris Schlossberg says investors only care about one thing and it has him seeing flashbacks to Amazon’s early years.

“With Netflix as always it’s about subscriber growth, that’s really what the stock is trading on right now,” Schlossberg, the firm’s managing director of FX strategy, said Monday on CNBC’s “Trading Nation.” “The bullish case for Netflix ultimately is that they reach 250 million subscribers at which point they’ll have such economies of scale that almost nobody will be able to catch them.”

Analysts surveyed by FactSet expect Netflix to increase its total streaming subscribers to 153 million in its first quarter. Sales are forecast to have grown by 22%, while earnings are expected to have fallen by 9%. Like Netflix, early investors in Amazon tended to focus on sales and customer growth over profitability.

Ari Wald, head of technical analysis at Oppenheimer, is bullish on Netflix, but sees some near-term headwinds for its price.

“We still rate it buy [but] there is some near-term moderation to be mindful of from a trading basis,” Wald said Monday on “Trading Nation.” “The stock has been stuck below resistance at the $385 level dating back to resistance from the third quarter of 2018. You can see the slope of the stock’s 200-day moving average, also taking a more sideways drift indicative of that moderation.” 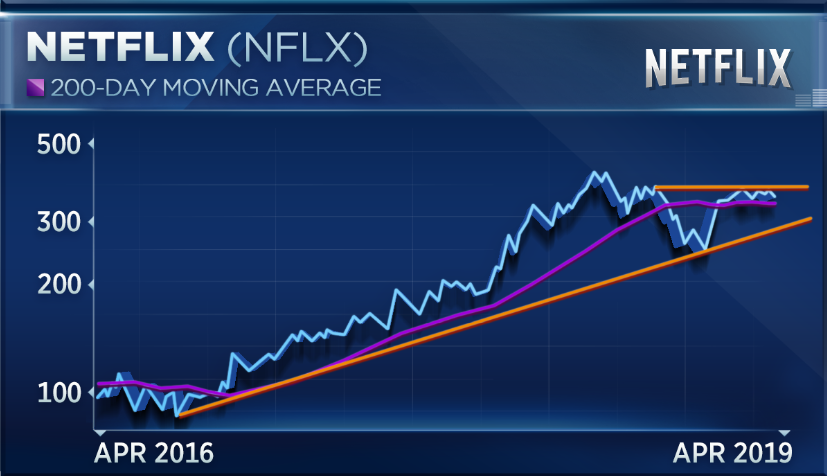 “But still we side with the long-term uptrend that’s still in play,” he said. “We think you do ultimately get the breakout to new highs. Speaking in terms of near-term support levels, it’s important to hold $325. That’s the stock’s 100-day moving average.”

Netflix has not traded at $325 since January. Since breaking out at the beginning of the year, it has traded in a range between $340 and $380.

Disclosure: Comcast, which owns CNBC parent NBCUniversal, is a co-owner of Hulu.

If You Like Dividends, You Should Love These 3 Stocks

Investment in the Contract Definition