Stocks are bouncing higher but could be trapped in a range until there’s a resolution of the trade wars and an end to the uncertain shadow it is casting over business confidence and the economy.

Technicians say the market was due for a rally but it’s unclear that it will last. The challenge would be for the S&P to revisit the 2,943 level, its Aug. 13 high, after the S&P last week was able to hold above its 2,822 Aug. 5 low.

“Seeing last week’s low hold I think was a positive sign for a potential bounce back to be more than just a few days. There’s no way to know that until we see follow-through later this week,” said Frank Cappelleri, executive director, Instinet. “The past two times you bounced from the same support level, it was over in a few days.”

Strategists said they are picking stock groups that they see benefiting in the current volatile environment, and one area where there could be gains is small caps.

“What we’re going through right now is a garden-variety pullback” in the 10% range, said Lori Calvasina, head of U.S. equity strategy at RBC. Calvasina said by 17 metrics she monitors, small-cap stocks are underperforming larger caps, the most since 2002.

“Let’s say we had a growth scare, and we had a big unwind, I don’t think small caps would be any worse than large cap,” she said. “The risk in the market is really sitting in that big-cap part. What you want to look for in these crisis periods is what are you going to buy for the long term. Small caps are screaming that they are the ones you want to own when this market turns around. More so than watching the S&P, you want to watch the small caps.” 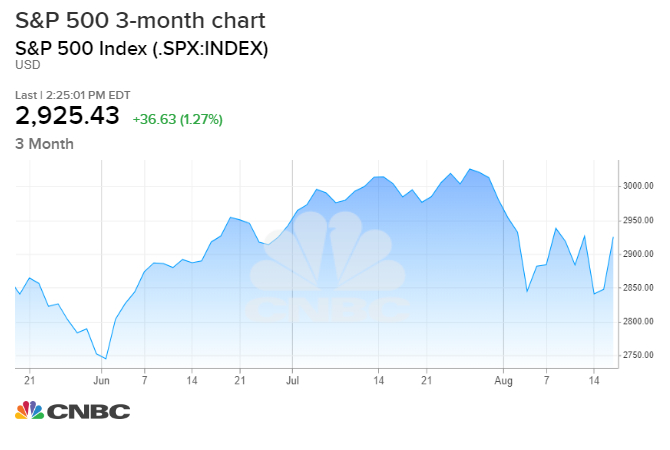 He said the worst may be over for stocks for now.

“I think we’ll definitely see big swings,” said DeSanctis, adding the market may have bottomed for now. “If companies are sitting here a few weeks from now and not knowing what’s going on with the tariffs, they’re going to cut numbers.”

“What we saw at the end of July, what [small caps] were telling you was they were confirming the weakness in the markets. They were not showing the same trend you saw in large caps. They didn’t set a new high the way the S&P did,” Calvasina said. “That was telling you people were having doubts about where the economy was headed.”

Calvasina said the trade issues need to be resolved in one direction or other, but the uncertainty needs to be lifted for businesses to invest. She said stocks, down about 7% at their lowest level this month, could end up dipping even more than 10%.

“It’s an open question. I think it depends on news flow,” she said.

Bond yields moved higher Monday, taking pressure off the stock market, but the extreme move lower in interest rates this month is helping lift rate-sensitive stocks. Homebuilders, for instance, were rallying Monday on the prospect that buyers could secure lower home mortgage rates.

The overall stock market has been slammed this month on fears the bond market is signaling a recession. Last week, a closely watched part of the Treasury yield curve inverted, with the 10-year yield temporarily falling below the yield on the 2-year note. That is often seen as a recession warning though the curve is no longer inverted.

With so much nervousness around rates and the economy, Fed Chairman Jerome Powell’s comments Friday could be the next big catalyst for stocks. Powell speaks at the Fed’s annual Jackson Hole, Wyoming, symposium.

“I think markets are expecting more easing. I don’t know what he’s going to say that would change that,” Calvasina said.

If Powell sounds hawkish, that could send markets reeling. Many are looking for him to explain what he meant by the comment that the Fed’s last rate cut was a midcycle adjustment, which markets took to mean a short-term process, not a longer term rate-cutting cycle.

For now, DeSanctis said he likes real estate stocks, which would be helped by lower rates. He also likes consumer discretionary and tech stocks, but he sees overzealous investors jumping into the QQQs which represents the Nasdaq 100 .

“As soon as the market goes down, that’s exactly where people want to go to. Back to the same stuff that’s worked. I’m not sure that’s the right idea, but that’s what the flows are telling us,” he said.

DeSanctis said it would be better to look for value stocks. Within tech, he likes semiconductors more than software.

“If you think the economy is not going into a recession, and we’re going to see improvement in value, and valuations matter more than growth at any price,” he said.

DeSanctis said he holds financials. “We think of more nonbank related financials are probably a better place to be. If you think the consumer is doing well, and they’ve got jobs and they’re making a little more money, then credit is not going to be an issue and consumer finance makes some sense, ” he said.

Small-cap stocks have been hit hard by earnings worries, with comparisons made even worse by the lift profits received from taxes last year. Smaller companies may have an advantage if trade wars continues since they rely on domestic profits.

“I think if you’re a short-term investor, it’s hard to pound the table on small caps. They’re riskier. They underperformed for a lot of good reasons. If you’re an asset allocator, and you’re looking long term, small caps are really the cheapest you’ve seen in small versus large since before the financial crisis,” Calvasina said.

Why Bed Bath & Beyond, Tapestry, and W.W. Grainger Slumped Today

This is the level of interest rates that could make things...

Bakkt Looks for Support for Its Next Futures Contract

Look Under The Hood: IWX Has 14% Upside

Apple Is Now the Top Dog in Wearables