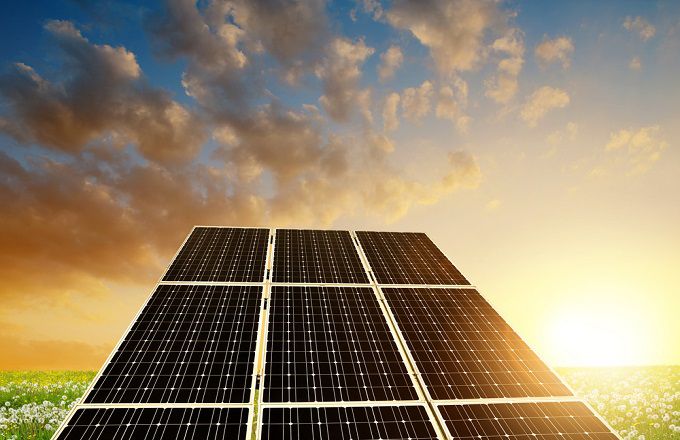 Many sector uptrends have broken down over the past several weeks due to increased fear of a trade war and the resulting spike in market volatility. While there seem to be very few segments outside of precious metals that are worthy of a closer look, solar does seem to be one of the few exceptions. In the paragraphs below, we’ll take a look at a few charts from across the solar sector and try to determine how followers of technical analysis will be positioning themselves over the remaining months of 2019.

The most popular exchange-traded product that is used by retail investors for gaining exposure to the solar sector is the Invesco Solar ETF (TAN). Fundamentally, the fund comprises 22 holdings and carries a net expense ratio of 0.70%.

As you can see from the chart below, the price of the stock is trading within a defined ascending channel pattern, which traders will use to determine the placement of their orders and to determine when the uptrend will be poised to reverse. It is interesting to note how the price has also managed to find support near its 50-day moving average on each attempted pullback so far this year. Followers of technical analysis would expect this behavior to continue into the close of 2019. From a risk management perspective, stop-loss orders will most likely be placed below $28.83 in case of a sudden shift in sentiment.

With a weighting of 8.78%, First Solar, Inc. (FSLR) represents one of the top holdings of the TAN ETF. With a market capitalization of $6.65 billion, it is one of the largest companies in the sector and is usually a favorite among active traders due to its relatively stable price action.

As you can see from the chart, the 50-day moving average crossed above the 200-day moving average earlier in the year, which for followers of technical analysis marked the beginning of a major long-term uptrend. Traders will often look to add to their long positions on retracements toward key levels of support such as the drop toward the converging trendlines near $57.75. Active traders will likely hold a bullish outlook on First Solar stock for the remainder of 2019, and most will likely protect against a shift in fundamentals by placing a stop-loss order below the dotted trendline or $54.48, depending on risk tolerance.

Canadian Solar Inc. (CSIQ) represents 4.43% of the TAN ETF and is markedly more volatile than First Solar. As you can see from the chart below, the stock has recently bounced off of the 200-day moving average and beyond defined resistance levels on higher-than-average volume. The breakout shown by the blue circle is a clear indicator that the bulls are in control of the momentum, and many will likely maintain this outlook until the price moves below the support of the ascending trendline or the 200-day moving average, which are currently trading near $19.45.

Solar companies seem to be one of the segments of the financial markets that have been unaffected by the increase in market volatility. Based on the charts discussed above, it looks as though now could be the ideal time to buy and that prices could finish 2019 sharply higher from here.

At the time of writing, Casey Murphy did not own a position in any of the assets mentioned.

What to Look For From BRK.A

For Sale By Owner (FSBO)

The 5 Countries That Produce the Most Sugar

Double Down Your Bitcoin Security by Utilizing 2FA Services

Rockefellers Go Long On Cryptocurrencies to Invest in Blockchain Startups

Who Was to Blame for the Subprime Crisis?