In the day just passed, bonds digested and reacted to the minutes from the latest Fed meeting (from late July).  Given that the Fed cut rates at that meeting and that many speakers have made themselves clear, there wasn’t much left to be gleaned from the minutes.  Still, there were takeaways for both bond buyers and sellers.  Buyers were a bit more keen right out of the gate, but sellers controlled the afternoon as the most notable feature of the minutes was an absence of firm commitment to additional rate cuts.

In the day ahead, bonds will get a chance to test their mettle against an important overhead ceiling at 1.62% in 10yr Treasuries.  Granted, MBS (which we care about most) haven’t been following Treasuries in lock-step, but the latter has been and will continue to be the most relevant guidance giver when it comes to broad momentum for mortgage rates.  In other words, if 10s break above 1.62, it’s a net negative for mortgage rates–just like you’d assume. 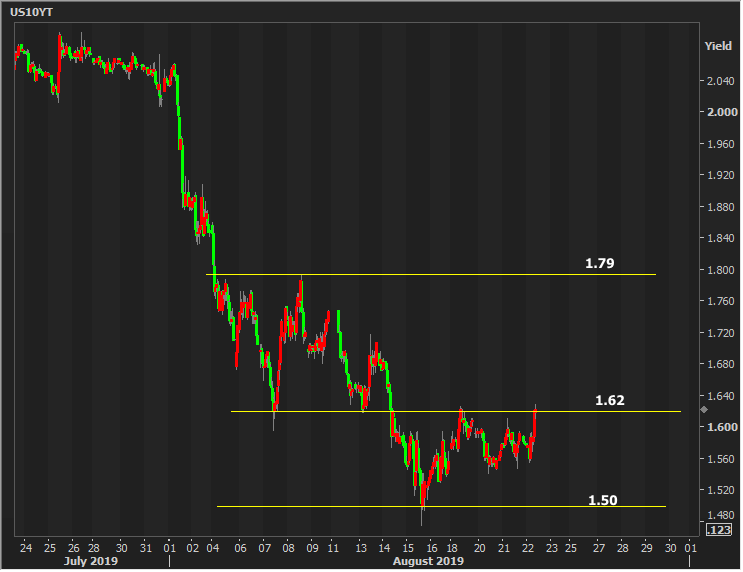 As the chart shows, after 1.62, it’s really not until 1.79 that we’d come to the next clearly-delineated ceiling.  In the current environment, such moves are very much in the realm of possibility on any given week of trading (but probably not this week!).

There are no big ticket events on today’s calendar unless you count the ECB Minutes that came out overnight (and contributed to early weakness in bonds).  Tomorrow brings Powell at Jackson Hole–another hit or miss Fed event that must be respected for its potential to cause a reaction, even though the likelihood of such a thing is debatable.

On Wave 1 and Devcon Ticketing

Twin Cities homebuilders off to a running start this year

Fannie Mae Turns Bullish on Construction, Best Levels Since May