Earlier this year, Comcast ‘s (NASDAQ: CMCSA) Universal Studios said that Netflix ‘s (NASDAQ: NFLX) fan-favorite megahit Stranger Things would be returning to its theme parks as part of its Halloween Horror Nights attraction for the second consecutive year. Universal partnered with Netflix to ensure fans got “authentic representations of the blockbuster series.”

Theme-park visitors will be able to enjoy key scenes from the supernatural thriller, including the parallel dimension — The Upside Down — while coming face-to-face with snarling Demodogs and making their way through iconic locations from the hit show including Chief Hopper’s cabin and the Starcourt Mall.

While this might all seem like fun and games, it’s actually part of a broader initiative by Netflix to tap into a multibillion-dollar merchandising opportunity. 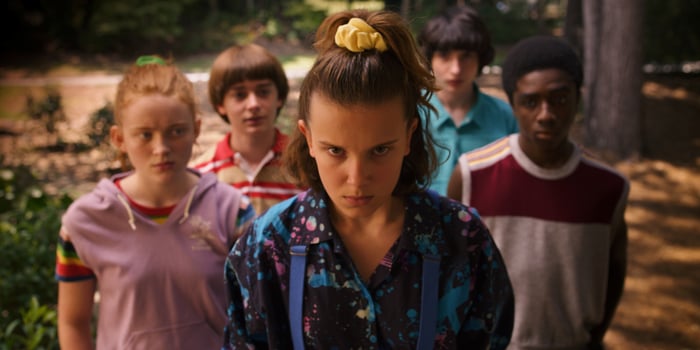 Leading up to the release of Stranger Things 3 , Netflix embarked on an all-out marketing blitz for the program. In addition to the more obvious fast-food, apparel, and toy tie-ins , the streaming giant made some other bold moves to engage with fans of the show and create new ones.

On June 29, Netflix held a Stranger Things -themed takeover of the Santa Monica Pier in Los Angeles that recreated the Fun Fair that featured prominently in the third season of the show. Early last month, the company also began a promotion with Microsoft (NASDAQ: MSFT) . Stranger Things 3 is set in 1985, the same year that Windows 1 debuted, so Microsoft released an app based on its then-cutting-edge 1985 technology — that’s been taken over by The Upside Down.

Going the extra mile to engage with fans appears to have worked. Netflix revealed in a tweet that 40.7 million household accounts had begun watching Stranger Things 3 in the first four days after its debut and 18.2 million had finished the entire eight-episode season.

40.7 million household accounts have been watching the show since its July 4 global launch — more than any other film or series in its first four days. And 18.2 million have already finished the entire season.

While the marketing push is obviously designed to increase excitement around what’s arguably Netflix’s most popular show, it’s also part of a broader push into merchandising based on its growing library of programming. Consumers spend more than $122 billion on products linked to entertainment, and Netflix is working to get its share of that market.

In order to capitalize on the massive opportunity, Netflix recently hired Christie Fleischer as its global head of consumer products, the first clear sign that the company is going all-in on merchandising. Fleischer is a longtime Disney (NYSE: DIS) veteran, recently serving as the head of merchandise for parks, experiences and consumer products.

At Netflix, Fleischer will handle licensee and retail partnerships, interactive games, publishing, merchandising, and experiential events. She also will lead the team charged with developing a portfolio of consumer products based on Netflix’s original films and television series.

How much is really at stake?

Now, $122 billion is a huge market, but how much of that can Netflix realistically expect to pocket?

Going back a couple of years, RBC analyst Mark Mahaney predicted that the company could eventually generate revenue of more than $1 billion annually from the sale of merchandise related to its most popular shows — like Stranger Things .

It might also help to put this into the perspective of an industry leader. Disney is the master of entertainment-based merchandising, so looking at its revenue from the space could provide context. In fiscal 2018, the House of Mouse reported sales of more than $4.65 billion from its consumer products and interactive media segment.

Based on the streaming giant’s recent moves, one thing is clear: Netflix plans to make the most of this opportunity and isn’t leaving anything to chance. Then again, stranger things have happened.

Motley Fool co-founders Tom and David Gardner have spent more than a decade beating the market. After all, the newsletter they have run for over a decade, Motley Fool Stock Advisor , has quadrupled the market.*

Tom and David just revealed their ten top stock picks for investors to buy right now. Netflix is on the list — but there are nine others you may be overlooking.

Big city landlords join plan to cut energy use 20% by...

A Guide To CEO Compensation

PR: Dynatiq Announces ICO for Their Blockchain Based Domains & Websites...

Orbital ATK Will Guide Hitchhikers to the Galaxy

Will SpaceX Lose Its Monopoly on Reusable Rockets?