In the day just passed, bond markets weakened in the overnight session and then held mostly steady during the domestic hours.  The most notable attempt to change that was seen after the exceptionally weak Markit PMI data which showed the weakest manufacturing and composite numbers since 2009.

Bonds don’t have a rich history of reacting to Markit PMIs (we’ve always preferred ISM numbers in the US), but that has been changing in recent years.  The volume and momentum behind yesterday’s reaction confirmed that (quick, high-volume, logical rally).

But the buyers only took yields so far before we found ourselves right back where we started.  Ultimately, 1.62% support held (our nearest major ceiling), despite a case to be made for an upwardly-sloped trend channel seen in the chart below. 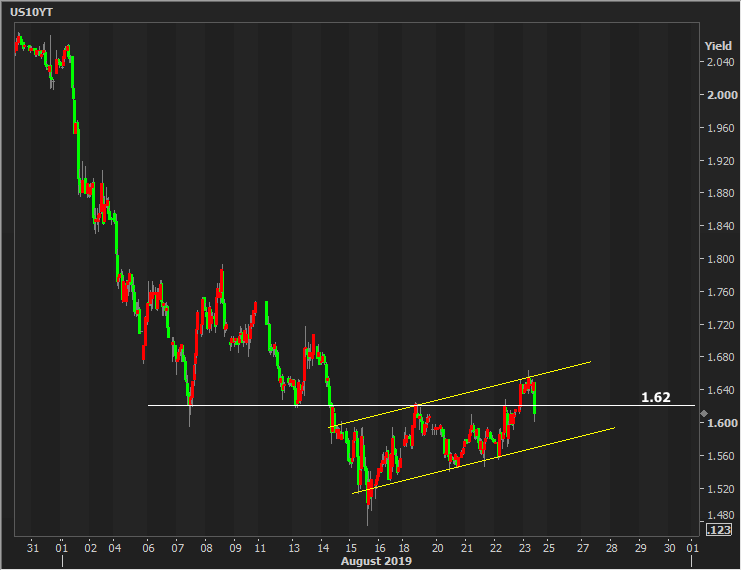 In the day ahead, bonds will continue to defend the 1.62% ceiling.  Their success will likely be dependent on the market’s reaction to various Fed speakers at the Jackson Hole symposium.  This is like the annual sales conference and tax write-off vacation for central bankers, economists, and heavy-hitter market participants from around the world.   Unlike your typical sales conference for loan officers, there are camera crews and reporters covering this one.

Jackson Hole has a well-deserved reputation for playing host to comments and ideas from the Fed speakers that might not be phrased the same way if delivered from their natural environment.  You know how it is… you go on vacation to somewhere beautiful, have a few drinks, get to talking with some friends, and suddenly your waxing poetic in a seldom-seen way.

Although the market reaction to Jackson Hole has been questionable in recent years, there’s quite a lot of anticipation for Powell this year.  It seems that traders are on the lookout for him to comment on the likelihood of additional rate cuts, as if he knows these things ahead of time.

Futures are pricing in 100% chance of a cut at the next meeting.  If Powell pushes back on that in any significant way, it could make waves.  Those waves would primarily be felt in the shorter end of the yield curve, but that trade has also been priced in fairly well this week (i.e. yield curve from 0.09 Monday to 0.02 today).

How Ginnie Mae could break stalemate on GSE reform