Two conflicting forces are working to influence the market and the “bad set” happened to win out on Friday, CNBC’s Jim Cramer said.

China’s trade delegation decided to cut short its trip to Washington for trade talks with the United States. The major averages all finished the session down less than 1% as it seemed unlikely the country would resume buying goods from American farmers.

Looking past parts of the economy implicated in the U.S.-China trade war, employment is strong and domestic companies without Chinese exposure continue to have a positive impact, Cramer said.

In the week ahead, the “Mad Money” host advised viewers not to pay attention to Federal Reserve reactions and to realize that the strong domestic economy and internationally-oriented economy are both balancing “on a knife’s edge.”

“That’s the right prism to use if you want to understand this market,” he said. 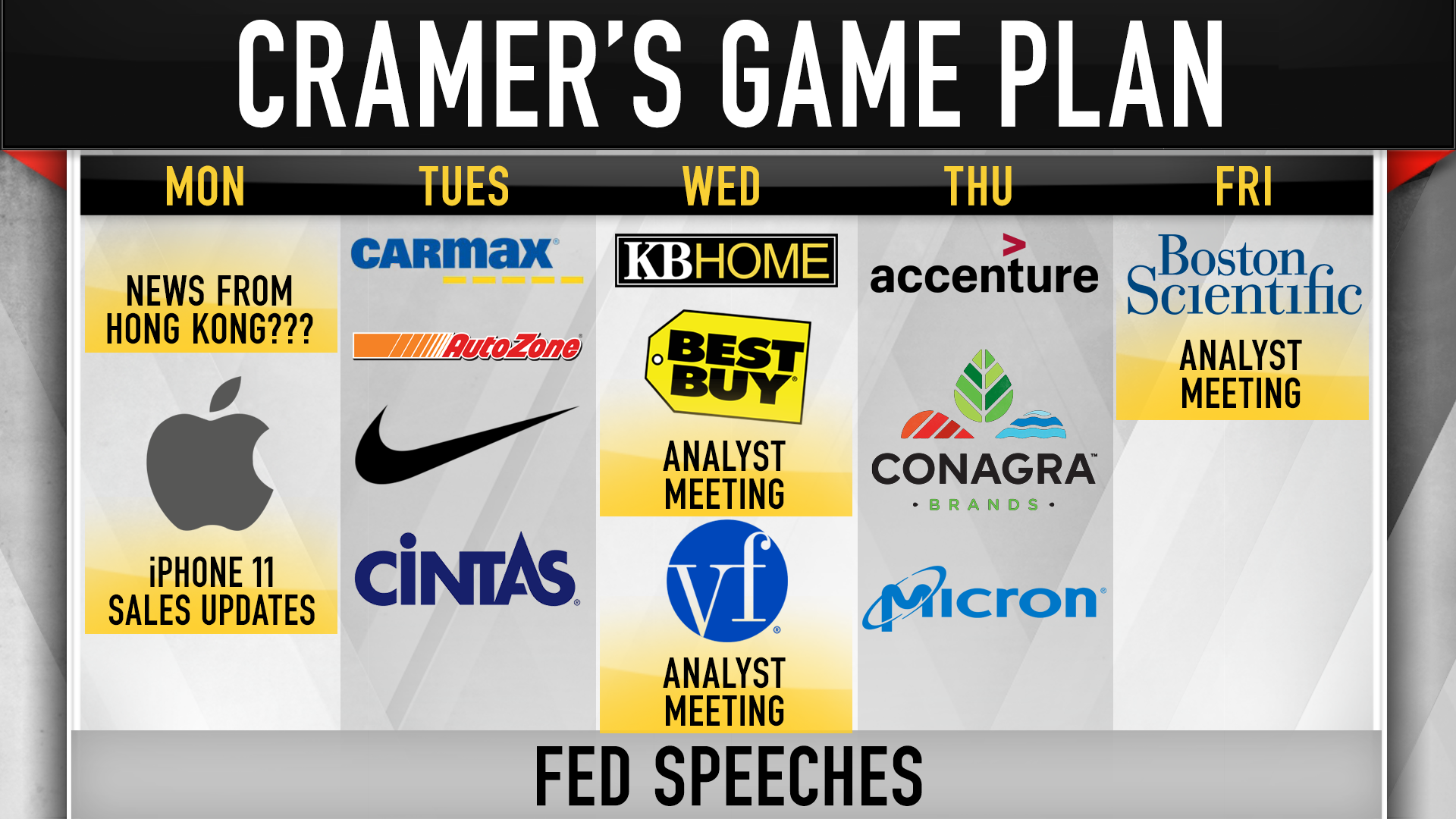 J.P. Morgan predicted that the lower-priced model will drive the company’s smartphone sales for the next year.

“What really matters is all the new service revenue and the new Watch,” Cramer said. “The most negative voices will be the loudest and the stock’s likely to get hit. … Don’t be shaken out. Like I always tell you, own Apple, don’t trade it.”

Used-car retailer Carmax and auto parts seller AutoZone both report earnings before the bell. Their respective stocks are posting more than 30% gains this year.

“Sometimes these two tend to trade badly on the day they report, even in the wake of strong numbers — they only start rallying after that initial dip. If you like CarMax or if you like AutoZone, I would buy some before they report and some right into their swoons.”

Shareholders get results from Nike after the market closes. The stock has found it tough to break through $90 per share this year, due to slowdown fears in the United States and China, Cramer said.

“I see no evidence of either slowdown, and I bet Nike’s shares could soar if they just say things remain strong around the globe,” he said.

Cintas, the uniform company, will release numbers at the end of trading. Analysts expect revenue to grow by more than 5% to $1.79 billion, according to FactSet.

KB Home is expected to report earnings at the end of the trading day. Analysts are looking to see $1.17 billion in sales.

“I expect KB to sell off after earnings because the analysts tend to be very critical of this one,” Cramer said.

Best Buy and VF Corp will host analyst meetings. Cramer hopes the electronics retailer reveals insight on iPhone sales and wants to see if the apparel company is still riding momentum from its Vans brand.

“Both companies are uniquely tied to the domestic economy,” the host said. “I bet they say very good things.”

Consulting giant Accenture is out with quarterly earnings before the market opens. Analysts expect more than $11 billion in revenue, according to FactSet.

The stock may get hammered on the report, “and that’s where you got to buy,” Cramer said.

Conagra also reports results in the morning. The packaged foods company has come up short on revenue in four straight quarters. Wall Street expects to see about $2.48 billion in its August quarter.

“I think they’ve figured out what’s wrong. I think they can nail this quarter,” the host said.

Micron Technology will be the “most controversial quarter of the week” when it reports after the close, Cramer said. The stock is up more than 55% in 2019, but the host worries if semiconductor demand will be strong enough to sustain the rally.

“There could be huge … pin action off this one, so you need to parse everything the company says and take any hugely positive commentary with a grain of salt,” Cramer said.

Executives at medical device maker Boston Scientific will give an update to analysts. The company rarely disappoints, Cramer said.

Mastertrader777 at it again on Twitter with his calls…Called it right...

Manhattan office market posts most activity since 2014, but rents lag

What You Need to Do Because of Flaws in Computer Chips

The Number-One Thing You Need to Do Before Going on Holiday...