As often happens with emerging technologies, the market for virtual reality is taking much longer to develop than many people originally expected. Consider that even Facebook (NASDAQ: FB) — which has billions of users hooked into its ecosystem — believes VR won’t go mainstream for another five to 10 years. Even so, the social media juggernaut’s leaders expect VR will grow into the next big computing platform — eventually.

The size and scope of both of these companies make them important virtual reality plays in the coming years. Both know how to scale and manage users by the billions, which could give each an advantage in a market forecast to hit $40 billion annually by 2020.

The case for Alphabet

You’ve probably heard of Google Cardboard, the company’s first, ultra-inexpensive foray into VR headsets, which was (unsurprisingly) made of cardboard. The company has since introduced the somewhat more upscale Daydream View, which at around $99 has a soft fabric exterior and a strap to keep it on the user’s head. (A Cardboard has to be held up to your face when you’re using it.)

But those cheap, simple headsets both require smartphones to power them and provide a screen. And the experience they provide is far less immersive than you’d get from pricier VR headsets that pair with PCs.

The real VR opportunity for Alphabet doesn’t lie in hardware — big opportunities for Google rarely do — but rather in the company’s virtual reality app hub, called Daydream.

Android users with compatible smartphones can use Daydream to access more than 200 virtual reality apps. Users can download VR games, and 360-degree videos that are specifically designed for viewing with a mobile VR headset.

This might not seem like a big deal right now, but its potential becomes much clearer if you think of Daydream like the Google Play app store. Right now, there aren’t many ways for smartphone users to find and access VR apps except through Daydream. That could become a powerful advantage in the coming years as more Android smartphones are built with Daydream compatibility.

Google is already building non-intrusive ads for VR that open up if user looks at them long enough or makes specific hand gestures. The ads usually play a video or allow a user to download an app, and could eventually be significant revenue generators.

Alphabet earned about 78% of all search advertising revenue this year, and that’s expected to grow to 80% by 2019, according to eMarketer. This dominance in search advertising will benefit the Daydream platform because it’ll be one more way for the company to collect information about its users and serve them even more targeted ads.

Facebook CEO Mark Zuckerberg has called VR (and its cousin, augmented reality ) the next major computing platform; Recently, the company unveiled its latest product to help fulfill that prediction: the Oculus Go. 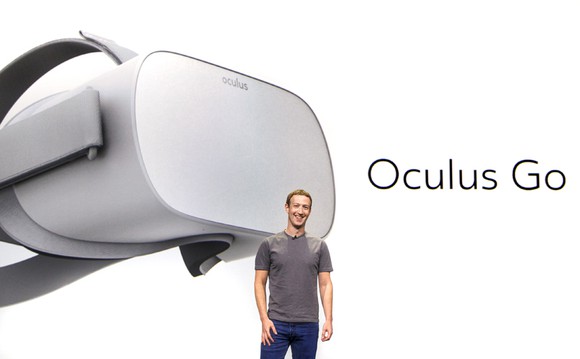 The Oculus Go, which will ship in early 2018, is wireless — unlike the Rift headset — costs just $200, and offers a higher-end VR experience than rival headsets like the Daydream View and Samsung ‘s Gear VR. The Go is a standalone device that doesn’t require a PC or a smartphone — all of the hardware and software are built into it.

Facebook is still trying to figure out the right price and the right features to draw the masses to its Oculus hardware; the Go may offer a winning combination. According to one study, the company will bring in just over $2 billion from sales of Oculus software, games, and hardware this year, and that number is projected to spike to nearly $9 billion by 2020.

But the company is also looking to other areas — such as advertising — to generate VR revenue.

At the Oculus developer conference this year, Zuckerberg said his company is creating a feature called “Venues” that will allow people to watch live sports and concerts with each other, using VR devices.

Facebook also revealed its Spaces VR app in 2017, which is essentially provides virtual environments where you can hang out and share content with your friends. Right now, it’s more of an early experiment than anything else. But investors should also see it as a test case Facebook can use to develop further VR platforms and content.

Finally, I think one of Facebook’s biggest VR opportunities comes from its ability to sell ads inside its VR platforms, just like Google. Sure, Oculus Go sales could eventually bring some revenue for the company, but Facebook is an advertising platform, and its long-term VR efforts will likely reflect that.

Keep this in mind

If VR becomes the next major computing platform, as Zuckerberg expects, it’s still likely to take a fair bit of time for the masses to transition away from traditional devices, apps, and operating systems and toward VR goggles. So don’t expect VR to become a major contributor to either of these companies’ top or bottom lines in the next few years.

10 stocks we like better than Facebook
When investing geniuses David and Tom Gardner have a stock tip, it can pay to listen. After all, the newsletter they have run for over a decade, Motley Fool Stock Advisor , has tripled the market.*

David and Tom just revealed what they believe are the 10 best stocks for investors to buy right now… and Facebook wasn’t one of them! That’s right — they think these 10 stocks are even better buys.

Bitcoin Could Swell To $1.5 Million If It Absorbs All Fiat...

7 Stocks In The Middle Of The Biggest Trend Of Our...

What are the differences between deferred expenses and prepaid expenses?