With sales growth of Tesla ‘s (NASDAQ: TSLA) Model S sedan essentially coming to a halt since last year, there is growing interest in the automaker’s next catalysts. Sure, the Model 3 is expected to help Tesla’s vehicle sales soar — but that won’t happen until Tesla ramps up production of the new vehicle. In the near term, this is putting the spotlight on the electric-car maker’s SUV — the Model X — as Tesla’s growth driver.

So, can the Model X help Tesla’s sales grow in Q4? Here’s a look at what to expect from Model X deliveries during the quarter.

Tesla’s sales growth in Model X since the vehicle was launched in September of 2015 has been staggering. Unit deliveries hit a record high in Tesla’s most recent quarter and have increased sequentially every quarter since its launch except one. Or here’s the best way to put recent growth in Model X deliveries in perspective: Trailing-12-month Model X sales of just under 43,000 units are 168% higher than the 16,000 units delivered in the year-ago period.

While Model X sales are still on the rise, they’ve slowed meaningfully in the past few quarters. Model X unit sales in Tesla’s third quarter, for instance, were up 19% sequentially and 35% year over year. Even more, Model X deliveries were up just 4.3% compared with Tesla’s previous quarterly record for Model X deliveries set in the first quarter of 2017.

In Tesla’s third-quarter shareholder letter, management said it saw record net orders for Models S and X in its third quarter. In addition, management guided for a record 27,000 combined Model S and X deliveries — a level that would probably be difficult to achieve without sequential growth in Model X deliveries. 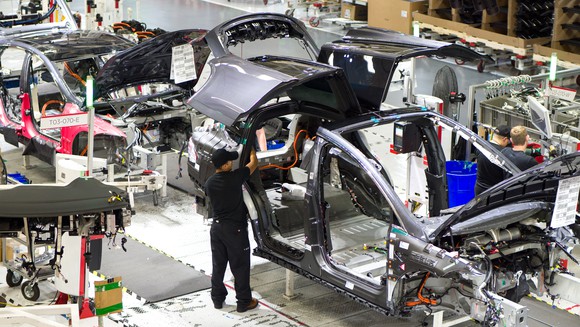 Management is particularly bullish on Model X. In July, Tesla said that it wasn’t until this summer that its stores were equipped with a sufficient number of Model X display and test-drive units. Its stores “had been operating with far short of what was needed and, in some cases, none at all,” Tesla said in its second-quarter update on vehicle deliveries. But with Tesla finally prioritizing demand generation for Model X to the same degree it was pushing Model S sales, management was optimistic about sales potential for the SUV, saying, “There appears to be substantial untapped sales potential for Model X.”

With this background in mind, Tesla’s Model X sales are likely to hit record levels in Q4, but sequential growth will probably be slower than in recent quarters. I’m expecting about 12,500 Model X deliveries or more in Q4, up 5% sequentially and 31% year over year. This would bring year-over-year growth in trailing-12-month Model X deliveries to 81%.

Assuming the Model S can account for the rest of Tesla’s expected 27,000 combined Model S and X deliveries, vehicle deliveries excluding any Model 3 deliveries would be up 3% sequentially and 21% year over year.

Tesla reports its quarterly vehicle deliveries within three days of the quarter’s end. So expect to find out exactly how many Model X units were delivered during the quarter by Jan. 3.

10 stocks we like better than Tesla
When investing geniuses David and Tom Gardner have a stock tip, it can pay to listen. After all, the newsletter they have run for over a decade, Motley Fool Stock Advisor , has tripled the market.*

David and Tom just revealed what they believe are the 10 best stocks for investors to buy right now… and Tesla wasn’t one of them! That’s right — they think these 10 stocks are even better buys.

What is the ideal number of stocks to have in a...

His Sites Have Reached Hundreds of Millions of People — Now...

Caterpillar and four other Dow stocks that should win if dollar...