Intel (NASDAQ: INTC) has stood out from its technology peers for decades because of its willingness to pay dividends to its shareholders. The semiconductor giant started with a small dividend in 1992, and began making dramatic boosts to its payouts in the mid-2000s. Since then, Intel’s dividend yield has grown to respectable levels. As the tech giant finds its way through a transition away from its hardware-based roots toward a more diversified product and services lineup, Intel investors want to know if they can continue to expect higher dividends from the stock. Let’s see whether a 2018 dividend increase is in the cards.

The history of Intel’s dividend

Intel’s dividend growth has come in fits and spurts over time. Throughout most of the 1990s, the company made only a token payment, ensuring that investors who could only purchase income-producing stocks could buy shares of the tech giant. After the tech bust in the early 2000s, Intel went through several years of keeping its payout flat.

That all changed once the technology industry rebounded from its poor start to the decade. Intel’s dividend yield quickly went from minuscule to respectable, and even during the financial crisis, the company was able to sustain its higher dividend and set the path toward future boosts.

Yet Intel doesn’t particularly concern itself with maintaining any kind of annual streak. Often, Intel will go for a while with a flat payout, followed by more favorable periods when dividend growth accelerates dramatically. For instance, in the early 2010s, Intel’s challenges with respect to changing its business model away from a PC-based tech environment to one that involved more mobile devices hurt its earnings for a time, and the company merely kept its dividends constant rather than making some tiny dividend boost just for the sake of maintaining a streak of higher payouts.

Intel has gradually slowed the growth of its payout. 2017’s raise amounted to 5%, which was the slowest in three years. Yet even so, Intel’s dividend yield exceeds that of the Dow Jones Industrials and compares favorably with many of its tech peers.

Intel’s slowing dividend growth stems in part from its increased investment in capital expenditures. The company said coming into 2017 that it planned to spend 25% more on its capital budget than it had the previous year. That might not sound like big increase, but it added $2.4 billion to Intel’s cash needs. Moreover, the company has gotten more committed to growth by acquisition, with its recent $15.3 billion deal to purchase Mobileye having required a significant commitment of available capital. 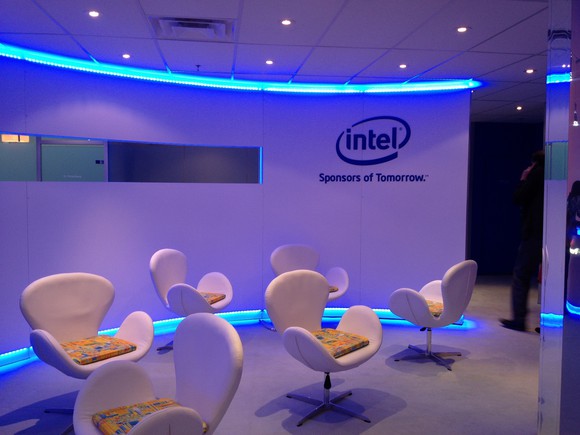 The results have been encouraging, as Intel has been able to pivot more aggressively toward higher-growth areas like data centers , cybersecurity, and the Internet of Things. Artificial intelligence and virtual reality also promise to be areas in which Intel could come to play a role, especially with applications in the self-driving vehicle market that the Mobileye acquisition will help to foster.

Intel has never seemed to be in a hurry to make dividend increases, and competitive conditions in the industry won’t give the tech giant a huge incentive to divert capital away from internal use to make a big payout increase. Intel investors might reasonably expect another mid-single-digit percentage boost in the early to middle part of 2018, which would take the quarterly dividend to $0.29 per share.

10 stocks we like better than Intel
When investing geniuses David and Tom Gardner have a stock tip, it can pay to listen. After all, the newsletter they have run for over a decade, Motley Fool Stock Advisor , has tripled the market.*

David and Tom just revealed what they believe are the 10 best stocks for investors to buy right now… and Intel wasn’t one of them! That’s right — they think these 10 stocks are even better buys.

China’s currency is a strong barometer on US-China trade

FedEx is having a dreadful December, but charts point to holiday...