Earlier this year, JetBlue Airways (NASDAQ: JBLU) launched a comprehensive fleet review, led by new CFO Steve Priest. This entails fine-tuning the timing of aircraft deliveries from Airbus (NASDAQOTH: EADSY) — as well as the mix of models within the A320neo family — and making a decision about the future of the carrier’s Embraer (NYSE: ERJ) E190 fleet.

JetBlue aims to finish the fleet review and announce its plans by the end of 2017, according to management. Some of the potential fleet changes could significantly improve JetBlue’s earnings power over time, so this announcement may be a big catalyst for JetBlue stock.

Will JetBlue expand its horizons?

One key decision JetBlue has to make is whether or not to upgrade some of its Airbus orders to the A321LR model. The A321LR will become available in late 2019 and is projected to offer 4,000 miles of range. This would give JetBlue the ability to fly from its Boston and New York focus cities to numerous destinations in Western Europe.

JetBlue’s management is working through an analysis to determine whether flying to Europe would be margin-accretive. Based on the low operating costs of the A321LR and the massive popularity of JetBlue’s upscale Mint service on transcontinental routes, it certainly seems like there’s a big opportunity for JetBlue in the transatlantic market.

As a JetBlue shareholder (and fan), I certainly hope the company tries flying to Europe. There’s only so much you can learn from running financial projections. Mint has turned out to be vastly more profitable in the domestic market than management had expected. It would have been a shame if JetBlue had decided that the projected profitability of Mint wasn’t quite high enough to justify the investment.

What’s the future of the Embraer E190 at JetBlue?

An even thornier issue for JetBlue is plotting a long-term strategy for short-haul markets. Today, it serves many of these routes with the 100-seat Embraer E190 jet. From a revenue production standpoint, the E190 is ideal. It enables JetBlue to offer high-frequency service in order to attract business travelers.

However, the E190 has much higher unit costs than JetBlue’s A320s. The gap has increased over time as pilot wages escalated and maintenance costs for the E190 proved to be much higher than initially expected.

JetBlue has 60 Embraer E190 planes in its fleet today. Half are owned, while the other half are on leases that expire between 2023 and 2025. It would be simple enough to exit the leased part of the fleet by the end of 2025, but JetBlue would probably have to write down the value of the owned E190s significantly if it were to sell them within that same timeframe. Yet the benefits of upgrading JetBlue’s fleet might justify that cost.

The most straightforward option for JetBlue would be to return to a single fleet type. It could probably buy (or lease) cheap used A319s to use on lower-demand routes while “upgauging” most E190 routes to Airbus A320s. This strategy would lead to significantly lower unit revenue on some routes, but that might be more than offset by a big decline in JetBlue’s unit costs.

The alternative is to continue operating two different aircraft types. The CSeries family and Embraer’s next-generation E2 family are the main options if JetBlue decides to go this route. 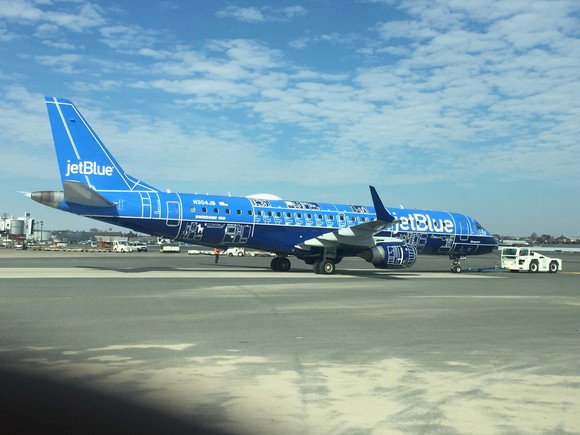 JetBlue will probably opt to retire some E190s ahead of schedule. Image source: JetBlue Airways.

The first CSeries jets have already entered service and have been even more fuel efficient than promised. Another advantage of the CSeries jets is that they have full transcontinental range. As a result, JetBlue could even replace some of its A320s with CSeries aircraft for lower-demand routes that are too long for its Embraer jets.

However, Embraer’s E2-series jets offer some big advantages , too. First, Embraer is in the best position to take JetBlue’s current-generation E190s as trade-ins for a new order. Second, JetBlue already has firm orders for 24 E190s, which it could swap for E2 orders. Third, upgrading to the E190-E2 and/or the E195-E2 wouldn’t require expensive retraining of JetBlue’s pilots. Fourth, of the available options, only the E190-E2 is a true 100-seat aircraft, making it the most suitable for markets where JetBlue most needs smaller planes.

JetBlue is poised to make some big decisions that will shape its future for the next decade and beyond. Once the carrier clarifies its long-term strategy, the market may begin to recognize the extent of JetBlue’s profit growth potential, sending the stock price higher.

10 stocks we like better than JetBlue Airways
When investing geniuses David and Tom Gardner have a stock tip, it can pay to listen. After all, the newsletter they have run for over a decade, Motley Fool Stock Advisor , has tripled the market.*

David and Tom just revealed what they believe are the 10 best stocks for investors to buy right now… and JetBlue Airways wasn’t one of them! That’s right — they think these 10 stocks are even better buys.

Bitcoin Price | What the Technical Chart Indicates About BTC’s Movement

The fintech that turned a warehouse into a funhouse

The History Of Money: From Barter To Banknotes

Trump’s Infrastructure Plan May Ignore Climate Change. It Could Be Costly.