CorEnergy Infrastructure Trust (NYSE: CORR) is unique in the oil and gas industry. While it owns traditional energy infrastructure assets like pipelines and storage terminals, it has chosen to structure as a real estate investment trust (REIT) instead of a master limited partnership (MLP). Because of that, it’s an ideal option for a retirement account, which can shelter the company’s lucrative 8.3%-yielding dividend. Further, that payout appears to be on a sound foundation given its solid financials, which could enable the company to grow the dividend in the coming years.

Here’s a closer look at why retirees might want to consider adding this high-yielding energy stock to their portfolios.

Digging into the numbers

CorEnergy Infrastructure Trust currently pays out $3 per share in dividends each year. Supporting the payout is the $3.85 per share in adjusted funds from operations (AFFO) it has pulled in over the past year, which is a metric used to measure the cash flow it could pay out in dividends. These numbers imply that the company has covered its dividend with cash flow by 1.28 times, which is a comfortable level for a REIT. Meanwhile, since long-term leases back the bulk of its assets, cash flow is highly predictable. Further, those contracts have proven themselves to be unshakable since they are on mission-critical assets for customers. In fact, two of the company’s largest tenants declared bankruptcy during the oil market downturn but continued paying rent throughout the process, and the agreements came through proceedings unaltered.

In addition to the durability of its cash flow, CorEnergy also has a solid balance sheet. Currently, it’s leverage ratio is 26%, which is at the low end of its 25% to 50% target range. That’s even after taking into account its plan to borrow $41 million, which it plans to use in acquiring an additional 18.95% interest in its Pinedale Liquids Gathering System for $32.8 million as well as paying off the existing debt on that asset. Supporting the system is a 15-year contract with natural gas producer Ultra Petroleum (NASDAQ: UPL) , which pays it a minimum of $20 million per year in rent. Even after making that deal, the company has about $146 million of liquidity for additional acquisitions. 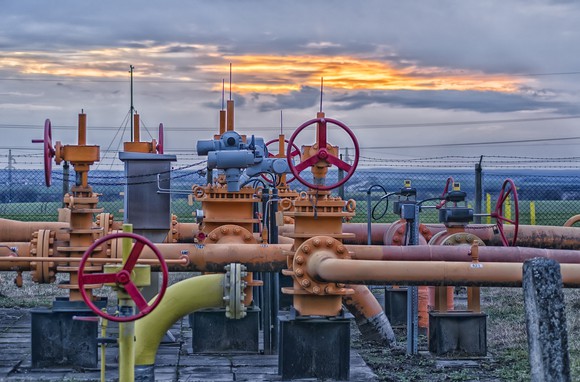 The payout could get even bigger in the future

CorEnergy Infrastructure Trust’s predictable cash flows and solid balance sheet suggests that its current dividend is sustainable over the long term. In fact, the payout could grow in the coming years if the company can make the right deals to increase its income stream. As things stand right now, the company expects revenue to grow by about 1% to 3% annually through inflation-based rent increases, rent adjustments based on customer usage, and additional growth from acquisitions. For example, last quarter, the company received its first variable rent payment from Ultra Petroleum because its volumes rose past a certain threshold. While this fee wasn’t material to CorEnergy’s results during the quarter, future payments could provide some incremental income. Meanwhile, the company noted that its purchase of an additional stake in Pinedale would produce modestly incremental AFFO going forward.

Overall, the company would like to buy one or two new assets each year, investing between $50 million to $250 million per deal. Those future acquisitions would both boost cash flow as well as diversify its portfolio away from Ultra Petroleum and other key customers, which would reduce risk and give it more confidence that it could sustainably increase the dividend.

A sustainable high yield with upside

With long-term leases backing its asset base, CorEnergy Infrastructure Trust should deliver sustainable income to retirees via its generous dividend. Meanwhile, with ample cash flow above that level and debt on the low end of its target range, the company has the financial flexibility to buy additional properties that would bolster its ability to grow that dividend. That income with upside makes CorEnergy Infrastructure worth a retiree’s consideration.

10 stocks we like better than CorEnergy Infrastructure Trust
When investing geniuses David and Tom Gardner have a stock tip, it can pay to listen. After all, the newsletter they have run for over a decade, Motley Fool Stock Advisor , has tripled the market.*

David and Tom just revealed what they believe are the 10 best stocks for investors to buy right now… and CorEnergy Infrastructure Trust wasn’t one of them! That’s right — they think these 10 stocks are even better buys.

Delivering Amazon Packages to the Top of the World

If the Trade War Starts to Damage the Economy, Here’s How...

How Bad Could it Get (And Why It Won’t Get That...

Bitcoin Bull Market Hangs in the Balance of Just One Line

North Korea could account for nearly a quarter of a unified...