The last time Wal-Mart (NYSE: WMT) tried to set fashion trends, it ended in disaster. But now, after a few years, the discount merchandiser has high-style ambitions again.

Wal-Mart is partnering with Hudson’s Bay (NASDAQOTH: HBAYF) department store chain Lord & Taylor to “create a premium fashion destination” by opening a flagship storefront on Walmart.com in the spring. It might not be as bad as putting clothing lines from DKNY, Marchesa Notte, or Rachel Roy on racks in its stores, but Wal-Mart is indicating it’s forgetting who its customer is — again.

A decade ago, Wal-Mart sought to keep pace with rival Target and its trendy clothing lines by launching fashions from Max Azria, Norma Kamali, and other designers. The retailer’s aspirations even went so far as to cause it to open an office in the middle of Manhattan’s fashion district.

Not surprisingly, it was a flop. Where Target developed collaborations with designers over time and apparel has grown to represent some 21% of its revenues, Wal-Mart shoppers apparently aren’t willing to play along with more than basic fashion, instead coming to its stores primarily, if not almost exclusively, for price.

People who buy designer clothes don’t shop at Wal-Mart for them, and those who look to the retailer for rock-bottom prices were put off by the elevated price points for the designer labels. Wal-Mart was forced to admit it made a mistake and jettisoned the concept altogether, and had to woo customers back with a big everyday low-price marketing campaign.

Above its pay grade

A couple of years ago, Wal-Mart quietly eliminated its everyday low price mantra, and switched to a “dynamic pricing” model where prices change based on supply and demand. But only a year or so later, CEO Doug McMillon said the chain was going back to basics and “playing offense with price” to reconnect with its customers.

Now it’s about to make another fashion/price faux pas, this time with grandiose ideas about becoming a “premium fashion destination.” 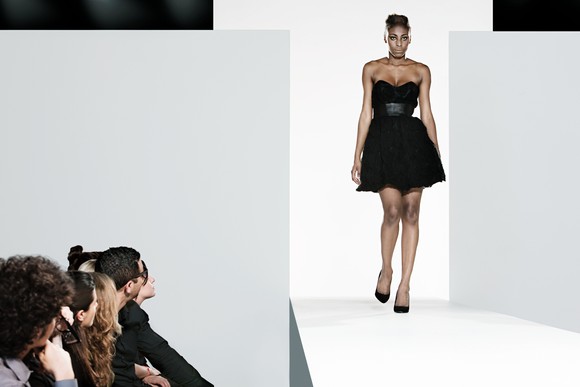 On the surface, it’s not a terrible idea to allow shoppers to be able to access Lord & Taylor products on the Wal-Mart website and through its app. It’s even somewhat in line with the recent acquisitions Wal-Mart has made, such as online retailer Jet.com, women’s clothing retailer ModCloth, menswear site Bonobos, and outdoor goods e-commerce site Moosejaw, all sites with a somewhat higher price point. It also just launched a new channel through Jet.com for millennials looking for premium-priced products called Uniquely J.

The Wall Street Journal has deemed it Wal-Mart’s attempt to turn itself from a place known as a deep discounter to more of an online mall, which would in theory help it compete better against Amazon.com .

Analysts anticipate Amazon’s e-commerce sales will surge 32% this year to hit almost $197 billion. In comparison, Wal-Mart expects online sales to hit $11.5 billion this year. However, it has been notching tremendous growth with e-commerce sales — up 50% in the third quarter. However, apparel makes up only 8% of Wal-Mart’s total annual sales.

Maybe it’s possible for Wal-Mart to walk that narrow line of having a dual strategy for its brick-and-mortar stores and digital space. In the former, it keeps its everyday low prices policies intact while online it is allowed to chase these flights of fancy and pretend it’s more than a deep discount retailer.

However, Wal-Mart’s experiences from whenever it has wandered away from simply providing the best prices is enough to make you wonder how long it will be before we see the retailer once more recommit to being the low price leader.

10 stocks we like better than Wal-Mart Stores
When investing geniuses David and Tom Gardner have a stock tip, it can pay to listen. After all, the newsletter they have run for over a decade, Motley Fool Stock Advisor , has tripled the market.*

David and Tom just revealed what they believe are the 10 best stocks for investors to buy right now… and Wal-Mart Stores wasn’t one of them! That’s right — they think these 10 stocks are even better buys.

John Mackey, CEO of Whole Foods Market, an Amazon subsidiary, is a member of The Motley Fool’s board of directors. Rich Duprey has no position in any of the stocks mentioned. The Motley Fool owns shares of and recommends Amazon. The Motley Fool has a disclosure policy .

Easy ways to save money with your credit cards

What the “FUD” is Going On?

Active fund managers trail the S&P 500 for the ninth year...