Master limited partnerships (MLPs) have been slowly disappearing. This past year saw a couple more vanish from the public landscape, with ONEOK Partners among the largest after its parent ONEOK (NYSE: OKE) bought all the units it didn’t own in a $17.2 billion deal. Before that, Targa Resources (NYSE: TRGP) bought out its MLP and Kinder Morgan (NYSE: KMI) acquired all three of its public entities.

Several factors played a roll in these roll-ups, though the main one was a desire to cut costs — namely, the expensive incentive distribution rights  (IDRs) that MLPs pay their parent. In fact, most MLPs that didn’t complete a roll-up transaction with their parents have cut deals to rid themselves of those fees. That said, there are a few stragglers out there still paying these high costs to their parents, with three appearing likely to go the buyout route to get them eliminated.

The quick way to get more breathing room

The weak energy market over the past few years has made things tight for EnLink Midstream Partners (NYSE: ENLK) . Cash flow has slipped a bit over the past year due to weaker volumes flowing through some of its legacy systems. As a result, the company can barely cover its distribution to investors. In fact, though the third quarter, it had generated $457.4 million in distributable cash flow and sent $455.5 million of that to investors. While the company has several growth projects underway that should grow cash flow and boost coverage, it will be quite some time before the MLP will be in the position to increase its payout.

How much longer can it hold out?

That said, management has been resistant to these calls , saying that they have no plans to consider an alternative corporate structure until late 2019 at the earliest. However, the company has a history of rolling up its MLPs, with Energy Transfer Partners merging with sibling Sunoco Logistics last year and combining with sister company Regency Energy Partners in 2015. That history suggests the company might act sooner than it’s letting on, especially if more MLPs disappear this year and its valuation remains insanely cheap compared to peers. 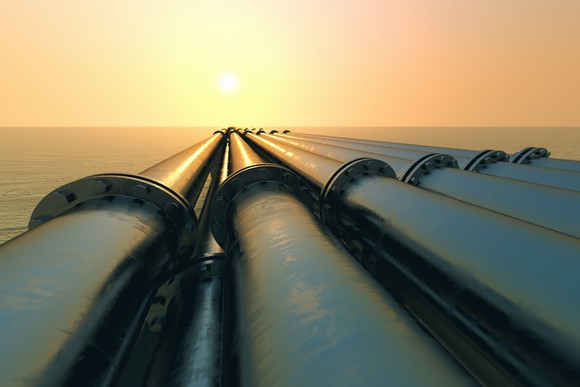 The writing is on the wall

Rice Midstream Partners ‘ (NYSE: RMP) days appear to be running out. The company’s former parent recently merged with natural gas giant EQT Corp (NYSE: EQT) , which has its own MLP EQT Midstream (NYSE: EQM) . EQT said that it would drop down the midstream assets it acquired in that deal to its MLP instead of Rice Midstream Partners, which makes its future unclear.

EQT Corp is currently evaluating its midstream options. That said, it makes the most sense to combine its MLPs into one entity and eliminate the IDRs. Doing so would create one larger midstream company that would have lower costs, making it a stronger option for investors.

It’s better in the end if things go this way

MLPs aren’t as popular as they once were. That’s leading energy companies to change strategy, with many either consolidating their various MLPs or eliminating the structure. That trend looks like it will continue in 2018, since several more need to do something to address their issues. However, because these consolidation transactions are creating stronger companies, this change will be good for investors in the long run.

10 stocks we like better than Energy Transfer Partners
When investing geniuses David and Tom Gardner have a stock tip, it can pay to listen. After all, the newsletter they have run for over a decade, Motley Fool Stock Advisor , has tripled the market.*

David and Tom just revealed what they believe are the 10 best stocks for investors to buy right now… and Energy Transfer Partners wasn’t one of them! That’s right — they think these 10 stocks are even better buys.

How long is the validity period for a Series 63 exam...

My take on Bank of America’s updated Cash Rewards card