Bed Bath & Beyond (NASDAQ: BBBY) has long believed the market could support 1,300 of its namesake stores. Even during the Great Recession and its aftermath, the home goods retailer has been marching inexorably toward reaching that goal. Today, it has just over 1,000, giving it plenty of leeway to open more.

Although it’s debatable whether Bed Bath & Beyond should continue building out its brick-and-mortar footprint, particularly as more competitors enter the space and many retailers are closing stores, how it plans to use its existing stores may finally give relief to investors.

Beginning in March, Bed Bath & Beyond will greatly change how its stores operate. Instead of being able to go to the store to buy whatever you want and go home with it, customers will now find a smattering of products to buy, but an abundance of merchandise on display that they’ll be able to order online, either in-store or later at home.

The “show more, carry less” strategy is premised on the idea that Bed Bath & Beyond can’t possibly carry in every store all of the items it has, but it can display their availability to customers who can then leverage its online inventory to buy them.

On one hand, it makes sense. Bed Bath & Beyond has reported eight straight quarters of flat or declining same-store sales . And digital growth might be slowing. In the second quarter, management reported that digital comps had been up more than 20% for the past 13 quarters. In the third quarter, the company didn’t give a number. It reported “strong sales growth from our customer facing digital channels” along with a “low single-digit percentage decline in sales from our stores” and an overall comps decline of about 0.3%.  That all suggests digital growth was not as vigorous as it has been.

Using its stores,which fewer people are visiting anyway, to bolster online sales could be a smart move. Except it will also be expensive.

Growth comes at a price

Bed Bath & Beyond leases virtually all of its stores and is locked into the leases for anywhere from 10 to 15 years. Over the next three years, it has over $1 billion in lease payment obligations due, and as much as $1.8 billion within five years.. While not all of that is for its namesake stores — Bed Bath & Beyond also owns buybuyBaby, Christmas Tree Shops, Cost Plus World Market, and more — they do account for the majority, or 65% of the 1,588 stores it runs. That’s a lot of space that’s going to be used and won’t register immediate sales. 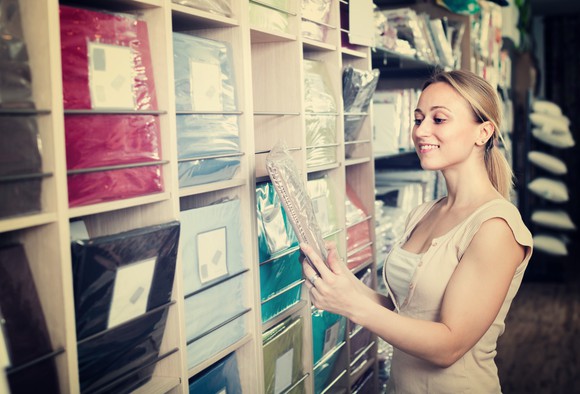 A path others have taken

If Bed Bath & Beyond is able to optimize its store layouts to deliver a better “omnichannel” experience, the retailer just might be able to improve its profitability. The experience of Home Depot (NYSE: HD) is often held up as an example of how a retailer can improve its profitability without the need to add more stores by concentrating on adding more online efficiency. Last year it recorded $5 billion in online sales compared to just $500 million in 2009.

Still, the examples aren’t completely comparable. Customers still go to the DIY center to buy things they can’t get online, and they’re getting sold into the online experience while there. Bed Bath & Beyond is trying to create a treasure hunt atmosphere to bring customers in, and then lure them into sales with an overwhelming assault on the senses with a plethora of displays.

There’s a lot more risk in Bed Bath & Beyond pursuing this path than Home Depot because there’s not much home goods consumers can’t buy at Wal-Mart , Target , At Home , or even TJX ‘s Home Goods and its new HomeSense chain. And increasingly, Amazon.com is a home furnishings force, along with Wayfair .

Although Bed Bath & Beyond needs to try something different to halt the decline, and creating a more experiential environment mixed with a sense of discovery has the ingredients for success, investors ought to wait for at least proof its strategy is working rather than just hoping that it can replicate what others have achieved.

10 stocks we like better than Bed Bath & Beyond
When investing geniuses David and Tom Gardner have a stock tip, it can pay to listen. After all, the newsletter they have run for over a decade, Motley Fool Stock Advisor , has tripled the market.*

David and Tom just revealed what they believe are the 10 best stocks for investors to buy right now… and Bed Bath & Beyond wasn’t one of them! That’s right — they think these 10 stocks are even better buys.

How Many Members Did Netflix Add in Q1?

Apple Co-Founder: Crypto World “Like the Internet When it was Brand...

Venezuelans to Be Paid at Least Half a Petro a Month

A Blockchain for Europe | A New Association Sets Out to...