After sputtering along as an ETF for Latin American real estate, the fund changed its investment focus to marijuana stocks, and traders flocked to it. On Thursday, speculators bought and sold more of its shares than they did the $145 billion iShares Core S&P 500 ETF , a testament to just how big it has become in marijuana stock circles.

Before diving in, those eager to own shares of the only U.S. listed marijuana stock ETF should know a few things about how it works, and its pros and cons.

There aren’t all that many investable marijuana stocks , which means that the ETFMG Alternative Harvest ETF has to loosely define the industry in order to find enough stocks for the portfolio.

According to the prospectus, this ETF includes companies that:

Most importantly, the fund requires that stocks have a minimum market cap of $200 million for inclusion, thus ruling out many marijuana penny stocks and upstart companies. Its expanded investment universe includes a few oddballs you wouldn’t expect in a marijuana ETF, including companies like Scotts Miracle-Gro and Philip Morris International , which derive little or no revenue or profit from current marijuana operations (though they may in the future). 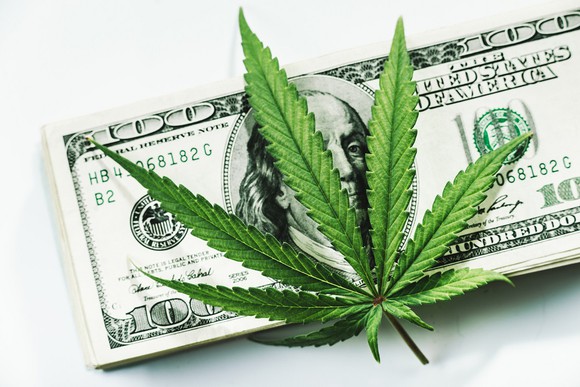 The fund’s largest holdings are concentrated in Canadian-based marijuana or marijuana-related companies, which make up 41% of the portfolio by market value. The United States and United Kingdom round out its three largest country exposures, making up 34% and 9% of the portfolio, respectively.

The top 10 largest stock positions are detailed in the table below.

It’s worth mentioning that because this ETF owns foreign stocks, it also has exposure to currency fluctuations. A strengthening dollar would generally lead to worse performance for stocks denominated in other currencies, while a weakening dollar would amplify returns. The fund rebalances its holdings quarterly in March, June, September, and December.

While the fund’s name, ticker, and investment portfolio have changed, the stock charts you see online haven’t. Performance prior to Dec. 26, 2017, should be simply ignored, unless for some reason you believe Latin American real estate and marijuana stocks have something in common.

With few competitors and no shortage of investors lining up, ETFMG Alternative Harvest ETF currently carries a relatively high annual expense ratio of 0.75%. In contrast, investors paid an asset-weighted average of 0.27% of assets on sector ETFs in 2016, according to the Investment Company Institute.

That said, I suspect the true economic cost of owning ETFMG Alternative Harvest ETF will actually prove to be less than 0.75% per year. Many of the fund’s holdings are heavily shorted, and the fund could collect a hefty haul by lending out its shares to skeptical short-sellers. Securities-lending revenue can add up quickly, as some small-cap ETFs have actually beaten their indexes  by generating more in securities lending revenue than they charge in management fees.

5. All about fund flows

This ETF soared in size from $5.7 million in assets on Dec. 26 to more than $256 million on Jan. 4. A larger fund is good and bad, though. More assets generally begets more volume and liquidity, but this weed ETF is getting so big it’s becoming a big fish in a small tank.

Consider that the fund recently reported holding roughly 336,000 shares of Turning Point Brands , which it invariably acquired over the seven days since the ETF adopted its new marijuana-focused strategy. Over that same seven-day period, roughly 829,000 shares of Turning Point changed hands, per Yahoo! Finance. I guess we know where more than 40% of those shares that traded hands ended up — inside the ETFMG Alternative Harvest ETF!

ETFs are supposed to follow the markets, not move them. As this fund grows it could become the tail that wags the dog, driving shares of marijuana stocks higher and lower as speculators move in and out of the ETF. Similar things have happened with other fast-growing ETFs. The VanEck Vectors Junior Gold Miners ETF famously grew so large that it was driving shares of junior miners up and down, and at one point it nearly owned 20% of a junior mining company.

While it’s unlikely that ETFMG Alternative Harvest ETF will own 20% of any company in its portfolio anytime soon, it’s likely playing a big role in driving volume in the stocks that make up its portfolio. At the margin, that means ETFMG Alternative Harvest ETF will likely push marijuana stock prices higher when speculative interest soars, and act as a needle to pop bubbly booms when speculative demand for the ETF wanes.

Is this marijuana ETF fit for your portfolio?

I like low-cost index funds as a way to get exposure to an entire industry or theme, but it’s my view that marijuana stocks are one corner of the market where investors should be selective. Many of the fund’s largest positions are in money-losing marijuana companies, as well as companies that have little or no direct exposure to marijuana right now.

Simple rules-based stock-picking methods employed by sector ETFs can fail in fledgling industries. Supreme Cannabis is one of the fund’s top 10 holdings, but it has a convoluted capital structure with tens of millions of outstanding warrants, stock options, and other derivatives that could send its share count soaring , diluting any would-be returns for its shareholders.

All in all, this ETF better fits the definition of speculation than investment.

10 stocks we like better than ETFMG Alternative Harvest ETF
When investing geniuses David and Tom Gardner have a stock tip, it can pay to listen. After all, the newsletter they have run for over a decade, Motley Fool Stock Advisor , has tripled the market.*

David and Tom just revealed what they believe are the 10 best stocks for investors to buy right now… and ETFMG Alternative Harvest ETF wasn’t one of them! That’s right — they think these 10 stocks are even better buys.

Post-coronavirus home price growth could be highest in these cities

The 5 Countries That Produce the Most Sugar

Apple Could Ship Its First Augmented Reality Glasses in 2020