General Motors (NYSE: GM) has taken the wraps off of its all-new 2019 Chevrolet Silverado. It’s a complete redesign of the full-size pickup that delivers an outsized portion of GM’s profits — and it was designed with an eye toward delivering even fatter profits in the future.

The new Silverado is the first in a wave of new trucks coming from GM over the next couple of years. The hope that those new trucks will be even more profitable than the vehicles they replace is a key part of the bullish case for GM’s stock over the next few years.

Earlier this week, GM’s president, Dan Ammann, gave Wall Street analysts an inside look at why GM thinks its all-new Silverado will be more profitable than the outgoing model. 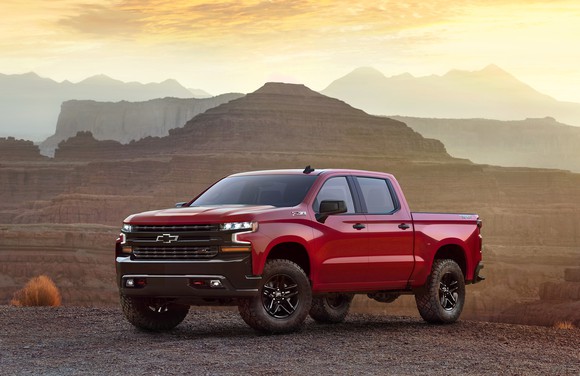 In his presentation to Wall Street analysts earlier this week, Ammann noted that the average transaction prices (ATPs) on GM’s full-size pickups, the Silverado and the closely related GMC Sierra, have risen significantly since the 2013 launch of the current model.

That was one of GM’s goals when the current trucks were launched . But despite the gains, Ammann said, there’s still a gap between the GM pickups and a certain competitor. 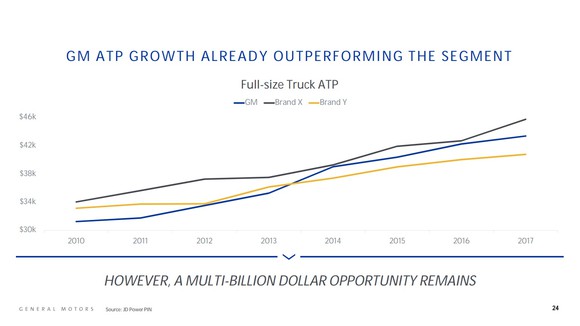 This is the pickup truck segment ATPs, with ourselves and 2 other companies that we called Brand X and Brand Y. You can figure out who’s who. The point here is that simply we’ve been growing our ATPs faster than the industry.

Ammann acknowledged that GM’s ATPs haven’t caught up to Ford’s, but the plan is to change that:

“In that gap between the blue line and the black line, there is still a multibillion-dollar opportunity for us to close that gap and to further take our ATPs to the very top of the segment,” Ammann said.

So how will the new Silverado help GM close that gap?

How the new Silverado was engineered for profit

Ammann said that GM’s new-generation truck architecture (the “bones” of the new Silverado and other upcoming GM trucks and SUVs), along with the factory shuffling that GM has done to be able to manufacture more of its new trucks, has given GM more product “bandwidth.”

By “bandwidth,” Ammann meant that GM now has the ability to create new versions of the truck that can compete well in niches of the huge U.S. pickup-truck market that the outgoing Silverado and Sierra don’t quite address — specifically, the over-$55,000 “luxury truck” realm that Ford currently dominates.

Ammann noted that GM has a roughly 35% share of the overall full-size pickup truck market in the U.S. But within the market, GM has an outsized share of the middle — trucks priced between $35,000 and $55,000 — and lower shares in the parts of the segment below and above that price range. 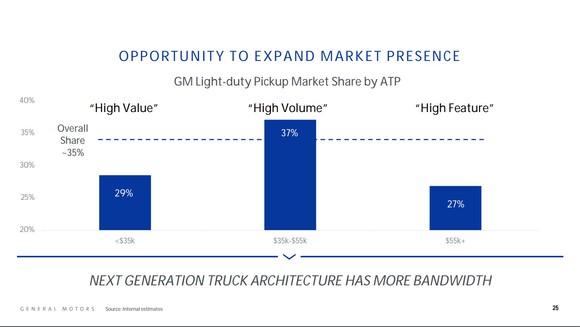 What does that mean in practice? For starters, the new Silverado will be offered in eight different trim levels, up from five in the current truck. That includes a new off-road “Trail Boss” version of the affordable (under $35,000) Silverado Custom, as well as new trims in the middle range that allow GM to take the upscale LTZ and High Country versions of the Silverado further upmarket.

With the all-new Silverado (and Sierra), GM will also have the ability to manufacture a larger percentage of higher-profit crew-cab models. About 60% of GM’s current-generation full-size trucks have crew cabs; that’s below the industry average of about 70%, Ammann said. GM hasn’t shown the all-new 2019 Sierra yet (that will probably happen in March). But Ammann said that the new Sierra, particularly in its upscale Denali trims, is more “differentiated” from the Silverado than ever before.

With a starting price just over $50,000, the current Sierra Denali is an upscale truck that has done well for GM. Its successor will take things a step further upscale, aiming squarely at the lavish top-line trims of Ford’s F-Series . Those top-line Fords are a big reason why the Blue Oval’s average transaction prices are so high: Sticker price on a loaded F-150 Limited, Ford’s current top-level trim, can get close to $70,000 — and Super Duty trucks in Limited trim can break $90,000.

GM has wanted a piece of that action for a while. Ammann seems confident that it finally has the right product to compete with those high-series Fords.

The upshot: In pickups, it’s still Chevy versus Ford

It’s one of Detroit’s oldest storylines: GM and Ford battling for customers and profits. But it’s a little different this time around. For most of its history, GM was focused on sales numbers, not profitability.

That’s one big change that Ammann and his boss, CEO Mary Barra, have brought to GM over the last few years. In 2017, we saw how new products — GM’s all-new line of crossover SUVs — could deliver stronger profits even in a sluggish market. GM is hoping to keep that story going when its new pickups begin arriving at dealers late this year.

10 stocks we like better than General Motors
When investing geniuses David and Tom Gardner have a stock tip, it can pay to listen. After all, the newsletter they have run for over a decade, Motley Fool Stock Advisor , has tripled the market.*

Do Banks Have Working Capital?

Charged Up! podcast: Tips for the business traveler

Cash is back in the fold as returns rise

AT&T’s cash flow could get a boost