NVIDIA grew trailing-12-month revenue 46% year over year through the fiscal third quarter ending in October. Margins expanded as well, boosting earnings per share 111% for the same period. This fueled an 81% increase in the stock price for the year. 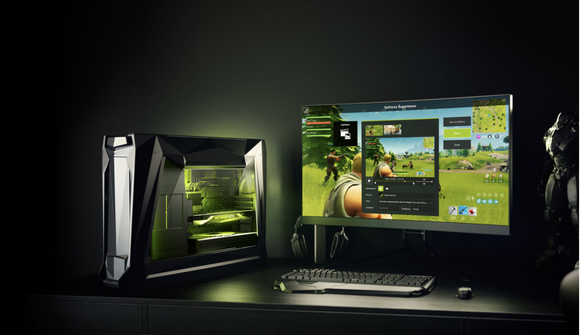 NVIDIA remains the leader in gaming

Selling GPUs to PC gamers is still NVIDIA’s largest business, making up 57% of trailing-12-month revenue, and Team Green continues to dominate this market. The company controlled more than 70% of the discrete GPU market through Q3 2017, according to Jon Peddie Research. NVIDIA saw gamers flock to its Pascal-based GPUs, driving revenue for the segment up 45% year over year for the trailing-12-month period through the fiscal third quarter.

NVIDIA introduced two GPUs for gamers last year that filled out what was already a strong offering. In the spring, NVIDIA launched the GTX 1080 Ti as its most powerful gaming graphics card. In the fall, NVIDIA strengthened its lineup heading into the holidays with the GTX 1070 Ti, which offered exceptional performance for the price.

Advanced Micro Devices (NASDAQ: AMD) gained a few points of market share on NVIDIA during Q2 after releasing its new Vega line of GPUs. This created uncertainty about whether NVIDIA could maintain its dominance, but that concern quickly ended when reviews showed AMD’s Vega GPUs not offering the advantage many expected in benchmark tests against NVIDIA’s GeForce 1080 Ti.

During Q3, NVIDIA regained the market share it lost to AMD in the previous quarter, according to Jon Peddie’s latest research report. This means that even before the release of the 1070 Ti, NVIDIA was already regaining momentum heading into the holiday quarter. This could foreshadow a big quarter for NVIDIA’s gaming segment when the company reports its fiscal Q4 financial results.

NVIDIA made great strides last year in positioning its DRIVE PX car computer as the chip of choice for makers of driverless cars. Earlier in the year, NVIDIA added to its impressive list of partnerships — which includes just about every major car manufacturer in the world — with ones from Toyota Motor  and two of Europe’s largest auto suppliers, ZF and Bosch. In data center, NVIDIA faced greater competition from AMD’s Radeon Instinct GPUs, but NVIDIA’s momentum didn’t slow down after announcements that three of the largest data center providers in China were upgrading to NVIDIA’s latest Volta line of chips.

Across gaming, data center, and self-driving cars, NVIDIA’s ability to deliver chips that offer high performance and relatively low energy requirements is keeping NVIDIA ahead of the competition.

Once again, NVIDIA has a lot of momentum entering a new year. Volta is the company’s new generation of GPUs, which offer five-times performance improvement over the previous Pascal generation. Volta for data centers is rolling out first, with Volta GPUs for gamers expected very soon.

NVIDIA continues to keep the pedal down in the wide-open self-driving-car market with new collaborations announced with Uber, Baidu , Volkswagen , and ZF at the 2018 Consumer Electronics Show.

In addition to these headline-making opportunities, NVIDIA has seen surprise demand from cryptocurrency miners, as well as robust demand for Nintendo  Switch, which is powered by a custom Tegra GPU.

In the company’s Q3 earnings press release, CEO Jensen Huang summed up why NVIDIA is not done growing:

Our Volta GPU has been embraced by every major internet and cloud service provider and computer maker. Our new TensorRT inference acceleration platform opens us to growth in hyperscale data centers. GeForce and Nintendo Switch are tapped into the strongest growth dynamics of gaming. And our new DRIVE PX Pegasus for robo taxis has been adopted by companies around the world. We are well positioned for continued growth.

Motley Fool co-founders Tom and David Gardner have spent more than a decade beating the market. (In fact, the newsletter they run, Motley Fool Stock Advisor, has tripled the market!*)

Tom and David just revealed their ten top stock picks for investors to buy right now. Nvidia is on the list — but there are nine others you may be overlooking.