Shares of Under Armour (NYSE: UA) (NYSE: UAA)  plunged more than 50% over the past 12 months due to a streak of decelerating sales growth and declining margins. Investors are still bearish on the stock, with 28% of its Class A shares and 19% of its Class C shares shorted as of Jan. 10.

Under Armour was considered the “next Nike (NYSE: NKE) ” during its heyday, but analysts now expect its revenue to rise just 2% this year as its earnings tumble 58% on margin pressure. So how did the company lose its magic over the past few years? Let’s take a look back at its six biggest blunders.

Under Armour’s North American revenue fell 12% annually last quarter but still accounted for 77% of its top line — compared to 83% in the prior year period. It struggled in this region due to three factors: the saturation of the footwear market, the bankruptcies of major retailers like Sports Authority, and tough competition from market leaders Nike and Adidas (NASDAQOTH: ADDYY) .

Over the past few years, the weight of Under Armour’s footwear business has risen relative to its apparel business. This is troubling, because footwear usually has lower margins than athletic apparel.

The company also needs to pour more cash into pricey footwear marketing campaigns featuring big endorsers like Steph Curry to keep pace with its larger rivals. Those costs are reflected in its declining operating margin over the past three years. 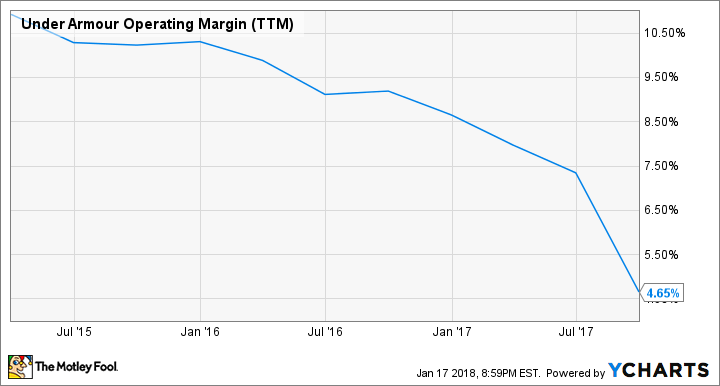 3. Trying to hit too many price points

As revenue fell, Under Armour launched more shoes across multiple price tiers. It inked partnerships with lower-end retailers like Kohl’s and DSW but also emphasized a “premiumization” strategy with high-end products like its flagship Curry shoes and Dwayne “The Rock” Johnson’s Project Rock Delta shoes.

The problem with this strategy is that it assumes Under Armour has the brand appeal of Nike or Adidas, which would enable it to sell cheaper shoes without hurting its brand. Unfortunately, its slumping sales and declining margins strongly suggest otherwise.

4. Failing to keep the Curry popular

Under Armour also spent tens of millions of dollars on its high-profile contract with Steph Curry over the past several years, but the popularity of his Curry shoes has significantly waned. The troubles started with the Curry 2 Low in 2016, which was widely mocked as resembling “nurse shoes”.

They persisted with the Curry 3, which missed sales estimates the following year. Later that year, the Curry 4 was hit by production delays and poor reviews, which resulted in the departure of the company’s footwear chief Peter Ruppe. Unless Under Armour gets its flagship shoes back on track, it will likely keep losing ground to the competition.

Those blunders with the Curry brand, direct attacks from Nike endorser Kevin Durant, and CEO Kevin Plank’s clumsy praise of President Trump — which was criticized by major celebrity endorsers — all took a toll on the company’s reputation with younger shoppers.

6. Believing that it’s a tech company

Kevin Plank also repeatedly emphasized the idea that Under Armour is tech company instead of a traditional footwear and apparel maker. That’s why it purchased various mobile apps, developed its own fitness and shopping app, and produced connected footwear, wearables, and other devices. 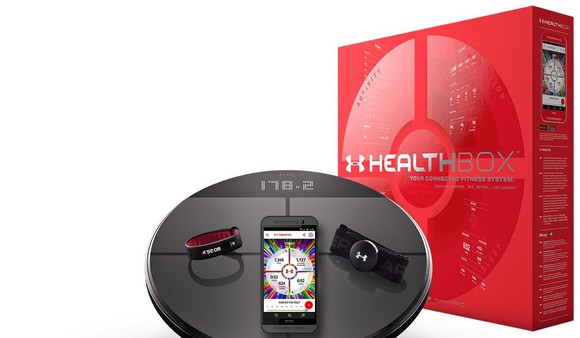 However, that “Connected Fitness” business turned into a money pit, incurring an operating loss of $44.6 million last quarter while generating just $23.4 million in revenues. Last November, Under Armour quietly killed off HealthBox , the unit’s flagship bundle, which included a fitness tracker, smart scale, and a chest strap heart rate monitor.

Back in 2015, management claimed the company would generate $7.5 billion in revenue by fiscal 2018. But today, analysts expect it to generate just $5.1 billion in sales in 2018 as its annual growth remains in the low single digits. Profit margins should remain under pressure as Under Armour tries to boost its sales growth with bigger discounts or new product launches.

As a result, the stock still looks pricey relative to its earnings growth potential — its Class A and Class C shares still respectively trade at 59 and 53 times forward earnings as of this writing. Therefore, I wouldn’t be surprised to see the stock fall further from current levels.

10 stocks we like better than Under Armour (A Shares)
When investing geniuses David and Tom Gardner have a stock tip, it can pay to listen. After all, the newsletter they have run for over a decade, Motley Fool Stock Advisor , has tripled the market.*

David and Tom just revealed what they believe are the 10 best stocks for investors to buy right now… and Under Armour (A Shares) wasn’t one of them! That’s right — they think these 10 stocks are even better buys.

Weighing The Week Ahead: Will Inflation Data Extend The Market Declines?