AbbVie Inc. (NYSE: ABBV)  is racing against time. Patents protecting its best-selling drug, Humira, expire in the EU later this year, and management is scrambling to develop new drugs that can make up for any lost sales when biosimilars launch in the U.S. in 2023. The company’s plans to diversify its revenue away from Humira, however, were dealt a big blow on Thursday, when management reported discouraging phase 2 trials for one of its most anticipated drugs, Rova-T.

Does this data mark the end for Rova-T? And what does it mean for AbbVie’s future ?

A big bet could be a big flop

There’s a big need for new drugs that can successfully battle back against relapsing and recurring solid tumor cancers. Up until now, AbbVie believed that big need could allow it to file for an accelerated approval of Rova-T in small-cell lung cancer patients who’ve received at least two previous treatment regimens, including at least one platinum-based regimen. The company’s confidence in Rova-T’s potential was so high that it paid $5.8 billion to acquire the drug in 2016.

Unfortunately, management might have been too confident. After discussing Rova-T’s midstage trial results with the Food and Drug Administration (FDA), AbbVie is abandoning plans to file for an early approval. In its trial, only 16% of third-line small-cell lung cancer patients expressing DLL3, a protein found on the surface of about 80% of cancer cells in small-cell lung cancer patients, responded to it.

That’s far shy of what people were hoping for. Because Rova-T specifically delivers a toxic payload to DLL3-expressing cancer cells, it was thought it could generate an overall response rate closer to 40%. Since the trial was a single-arm study without a comparator, the 16% rate simply doesn’t offer enough proof of its efficacy to win over the FDA.

The lackluster performance raises the stakes considerably for Rova-T’s remaining studies, including phase 3 trials for first-line and second-line small-cell lung cancer. A combination study involving Rova-T’s use alongside the checkpoint inhibitor Opdivo and trials evaluating its use in other solid tumor types should begin trickling out later this year and into 2019.

Yes, this is discouraging news — no question. However, Rova-T still has a chance to make its way to market.

Small-cell lung cancer is plagued by poor outcomes and limited treatment choices, so the efficacy bar is set pretty low. For instance, the five-year survival rate for stage I cancer is only 31%. Rates drop off considerably to just 2% for stage IV cancer. That makes it conceivable that even middling response rates in placebo-controlled studies could allow it to win a go-ahead, especially since the drug’s side effects appear manageable.

It’s best to significantly ratchet back or eliminate any Rova-T revenue from models estimating future revenue, but it’s also important to remember that this isn’t the only important drug AbbVie’s developing.

The company’s leukemia drug, Venclexta, won approval in 2016, and trials that could expand its addressable market have industry watchers estimating its peak annual sales could be between $1.5 billion and $2 billion.

AbbVie’s endometriosis drug, elagolix, is currently under review by the FDA, and recent trial data suggest that it may help patients with uterine fibroids, too. If elagolix secures a green light from the FDA, it could be a billion-dollar blockbuster , too.

Positive phase 3 results are also already in hand for two autoimmune disease drugs that could move the needle: upadacitinib, a JAK 1 inhibitor, and risankizumab, an anti-IL-23 antibody.

Upadacitinib has succeeded in three phase 3 rheumatoid arthritis studies, and that has management aiming to file for its approval by the end of this year. A blockbuster indication that affects 23.7 million people worldwide, a win in rheumatoid arthritis could put this drug on its way to peak sales of $6.5 billion if it also wins approvals for additional autoimmune disease indications.

Meanwhile, risankizumab has succeeded in four phase 3 psoriasis trials. In its most recently reported study, nearly half of patients achieved complete skin clearance, and 73% of patients achieved PASI 90, which represents a 90% improvement in a patient’s baseline Psoriasis Area and Severity Index score. Management plans to file for risankizumab’s approval by the end of the second quarter, and if it gets the green light for psoriasis and other indications, AbbVie thinks it can win be a $5-billion-per-year drug someday. 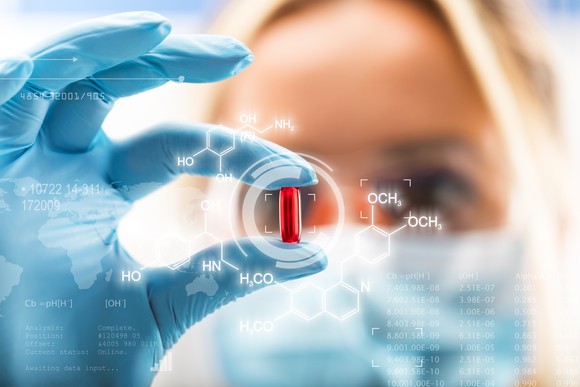 Risks remain, but there’s opportunity, too

The Rova-T uncertainty makes AbbVie a riskier stock to buy today than it was last week. Management will unveil more comprehensive data from its Rova-T trial in June, and that data could offer more insight into whether or not it’s game over for this drug. There’s always the risk that the FDA will balk at approving elagolix, upadacitinib, and risankizumab. If those drugs get rejected, it would be an even bigger blow to the company’s long-term plans.

Nevertheless, an argument can be made that a steep sell-off in AbbVie’s shares following its Rova-T news is discounting a lot of these risks while also boosting AbbVie’s attractiveness to income investors. A 12% slide in shares as of midday Thursday has increased its forward dividend yield to nearly 4%. Given AbbVie’s still got a few years before Humira’s competition emerges, it’s got multiple shots on goal, and it’s got plenty of cash flowing in from its current products, buying it on sale could be smart.

10 stocks we like better than AbbVie
When investing geniuses David and Tom Gardner have a stock tip, it can pay to listen. After all, the newsletter they have run for over a decade, Motley Fool Stock Advisor , has tripled the market.*

David and Tom just revealed what they believe are the 10 best stocks for investors to buy right now… and AbbVie wasn’t one of them! That’s right — they think these 10 stocks are even better buys.

Harvard: Remodeling to stall in 2020