If you’re a 10yr Treasury yield in 2018, you don’t simply have free reign to enjoy yourself at yields under 2.80%.  That’s a right and a privilege for which you’ll have to fight.  2 weeks ago, heading into the end of March, it looked like you were up to the task.  But by the end of last week, it looked like you might be having second thoughts.  Will this be the week where you firmly decide if you will keep partying or give up the fight?

These days, any time we have CPI (the Consumer Price Index) on the agenda, there’s a good chance that any big deviation from the forecast will set the tone for rates.  After all, rates have every motivation they need in order to move well over 3%, EXCEPT for any meaningful and immediate sign of an uptick in inflation.  In fact, it was a drop in core inflation in 2017 that helped rates stabilize without stampeding toward 3%.  With core CPI holding flat since then, investors are increasingly anxious about a potential move higher. 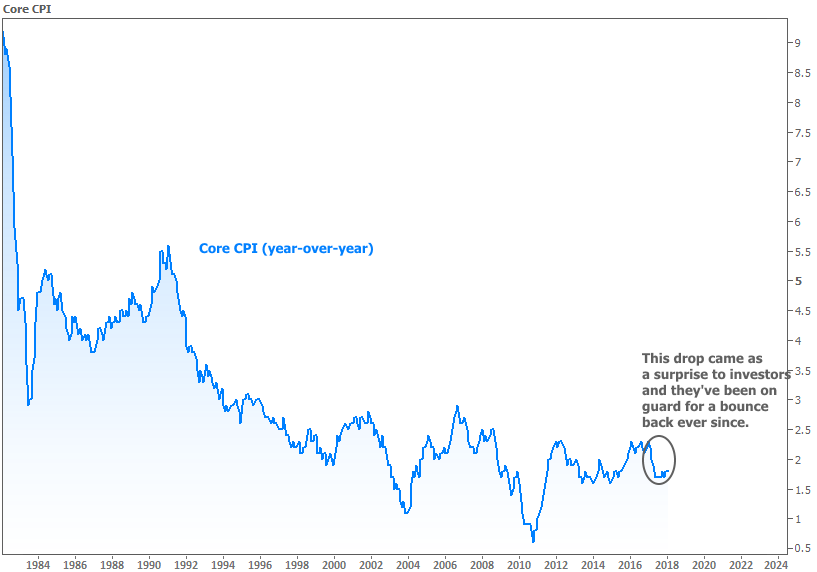 Stocks will remain in focus amid trade war tensions, and also simply because they’re quite close to their lowest levels of the year.  Any sharp move lower–especially if it breaks February’s “flash crash” lows, will likely draw out enough safe-haven bond buying demand to keep yields under 2.80%.

The other consideration for the week comes from SUPPLY (i.e. new bonds coming to market).  Supply is bad for rates because more supply = lower prices = higher rates.  The saving grace is that supply is typically scheduled in advance, thus giving markets time to price it in.  This is most true of Treasury auctions, as 95%+ of that supply is assumed and priced-in far in advance (i.e. traders know how much the government will be auctioning weeks in advance).  Still, there are undertones to be gleaned based on how an auction cycle unfolds.  There is also a certain amount of caution in play before the end of an auction cycle.  Bottom line: if we see strong demand for 10 and 30yr bonds this week, it will be saying a lot about how much you’ll be able to fight for your right to party under 2.80%.

Is Your Business Prepared for a Rising Minimum Wage?

4 Things You Must Know About Your Health Insurance Plan

Drop in nonbank mortgage jobs may signal market shift back to...