We’ve been increasingly wary about a potential break of the recent consolidation/rally trend–the one that saw yields move sideways to slightly stronger from late Feb through early April.  Yields tiptoed to the top of that range as of Tuesday and then fired a more forceful warning shot with a bigger breakout yesterday.  Today looks set to continue the destruction of the trend with sharp losses overnight.

Where might this be going?  With 2.86% breaking and 2.91% already being tested, there’s really only the super-long-term highs at 2.95+ remaining.  To see anything higher, we have to go back more than 4 years.  If that breaks, there’s not much overrun until we’re looking at 2011’s levels in the low 3’s as the supportive ceiling.

But let’s slow down a bit.  We’ll cross those big, scary bridges if we come to them (granted, pretty much everyone thought we’d see at least 3.2% this year, so it’s not like this is new, groundbreaking analysis.  It’s only in the past few weeks that analysts have begun to wonder if the top may already be in on yields).  For now, let’s just revisit a recent thesis about stocks driving bonds.  Specifically, stocks aren’t driving bonds today!

In fact, stocks are slumping even as bond yields rise.  So what gives?  I’m guessing the stock slide will end up being attributed to rising bond yields (which is laughable).  A bigger deal over the past 2 days has been Fed speeches.  Yesterday, Dudley said he expects conditions to become restrictive–something that’s bad for both stocks and bonds.  This morning, Brainard said she’s worried about “pro-cyclical pressures” including rising asset prices and leverage.  This is significant because Brainard is majorly dovish.  And when the doves start talking like hawks, you know the entire committee is considering ratcheting up its removal of accommodation.

While all of that is scary in the bigger picture, it’s not the Fed reaction that’s driving higher yields this morning–at least not exclusively.  How do we know?  Simply put: the yield curve is also steepening.  That means traders are selling 10 and 30yr bonds much faster than 2yr notes.  And 2yr notes are closely correlated with Fed rate hike expectations.  This looks like an old-fashioned technical bounce in the yield curve–something we’ve seen time and again as the curve continues to set new post-crisis records in 2017/2018. 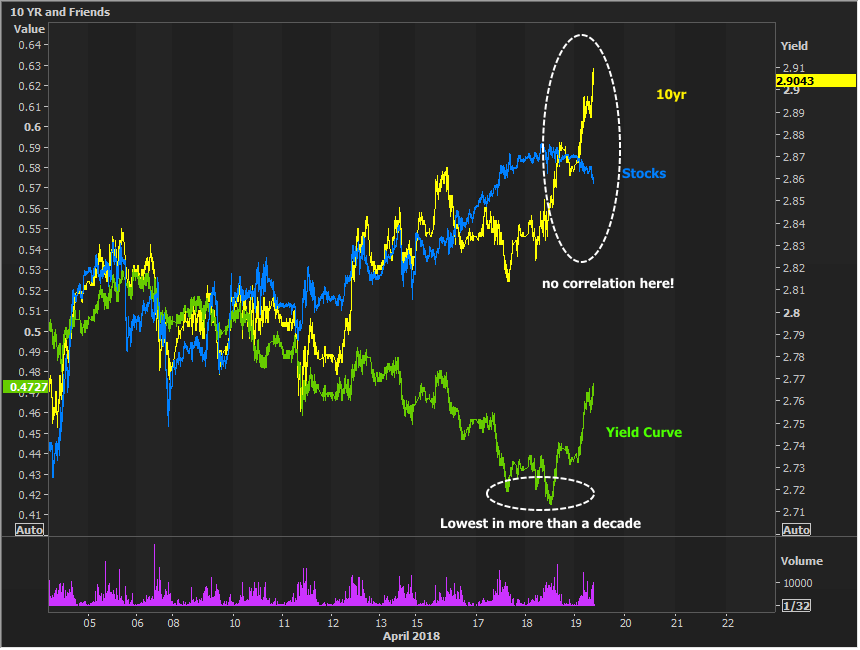 LG Working on a Blockchain Phone to Compete with Samsung

Teva Breaks Out Amid Hopes of Global Opioid Settlement

Newlyweds: How Should You Save for Retirement?