The Fed is set to raise interest rates Wednesday by a quarter point and issue new forecasts for the economy, inflation and interest rates at the end of its two-day meeting. The Fed is well ahead of the ECB, which holds its deposit rate at negative 0.40 and will not end its quantitative easing program until the end of the year.

“Now we have central bankers that are getting more hawkish. It’s not just the Fed. It’s Draghi. To use the word ‘vigorous,’ he could have used a different word. That’s not a word to throw around lightly. We’re seeing a global change in monetary policy,” said Peter Boockvar, chief investment strategist at Bleakley Financial Group.

Boockvar said Japanese rates jumped last week, with the 40-year Japanese government bond yield rising to 1.05 percent after the Bank of Japan reduced the amount of long-term securities it was purchasing. “Norway raised rates, Canada is going to raise rates. This is all in the context of a very levered world. It’s something we have to pay attention to,” he said.

Draghi’s comments come as markets have begun to price in a more hawkish Fed. Expectations in the futures market have only just recently priced in the two rate hikes forecast by the Fed for this year. Nearly two are priced in for next year, while the Fed has forecast three.

The ECB has not expected to raise rates until the fourth quarter of 2019. “I’m not sure it materially changes the outlook in the medium term, in terms of ECB policy,” said Alan Ruskin, head of G-10 foreign exchange strategy at Deutsch Bank.

Ruskin said the market expectations for a European rate hike for next year moved slightly higher, and it’s possible it could come a little earlier. “One would argue that still probably the market is being more dovish. … He’s not signaling that he’s going to raise rates before 2019. … It does add up to the ECB being more hawkish than the market expects.” 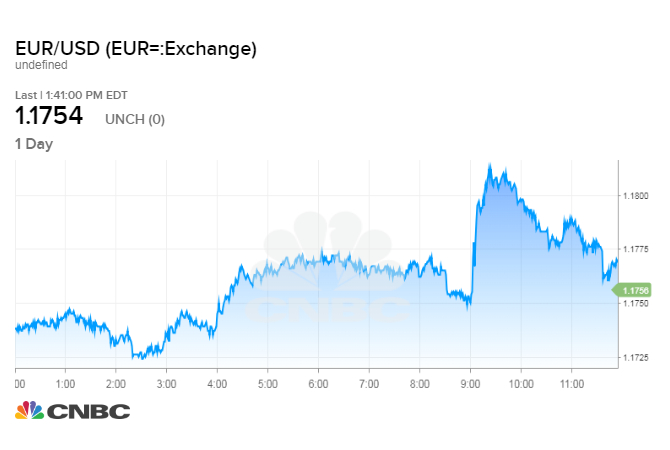 “I think it’s more significant he’s saying this when the euro already appreciated from the $1.13 we saw in August. In six weeks the euro has gone up a nickel. If anything, inflation of the euro is going to dampen core prices. If we get much above $1.185, a lot of people become much more cautious.”

Chandler said the market will be watching European inflation data when it is released Friday.

Oil and gas supply disruptions ripple around the world

Two Dow stocks, a ‘FANG’ giant to buy amid the tech...

Case-Shiller: Home price gains retreat below 6% for the first time...

How Do They Cash Out?