Lefkowitz says he expects the market sell-off that has knocked 6.4 percent off the S&P 500 since the start of October to be a relatively short-term phenomena and earnings season could be the catalyst that turns it. He also said the bigger driver of the sell-off was probably fear about the impact of trade wars and tariffs on profits, rather than the recent rise in interest rates.

“It’s hard to predict when the precise bottom is in with these type of events, but I think the risk reward is looking more attractive and our six month target on the S&P is 2,950. I think earnings season is going to be very crucial,” said Lefkowitz.

“If our perspective is right, it’s about growth and the more we hear form companies about the growth outlook, and if it’s in tact, that would be a possible catalyst to move things higher.”

Stock futures were higher Thursday evening after a second sharp rout earlier in the day. The S&P 500 closed down 2.1 percent at 2,728, and the Dow was down 545 points, to 25,052, a 2.1 percent decline. Nasdaq slid 1.3 percent, to 7,329. Stocks attempted to stage a reversal Thursday but failed, though the market did not close on its lows as it did on Wednesday.

In this week’s sell-off, the market has broken through many key technical levels, which have been widely watched across the market —not just by chart analysts. The S&P 500, for instance, broke through a key momentum level, the 200-day moving average, Thursday. That level was 2,765.

“It’s the 200-day test. Today we were driven down to the 200-day moving average. Sometimes, it’s very important to hold it but it’s really important to see how it acts for two or three days,” said Scott Redler, partner with T3Live.com. Redler, who watches short term technicals, said if stocks can bounce and hold, it would be a good sign that the selling could be nearing an end. 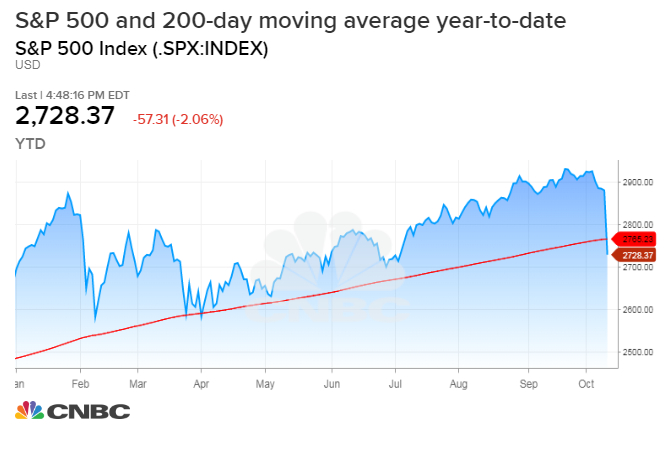 “Right now, we just had the normal corrective move that we’ve had multiple times over the last few years where the S&P comes down five to six percent off its highs. Everyone gets bearish and starts talking about 10, 15, 20 percent corrections. The question is do we get back above [the 200 day] and rally in the next two or three sessions?” he said. “If not, the bears will get some confidence and could turn it into a 10 percent correction or more.”

An important next move could be determined by JP Morgan. “Do the banks act better after JP Morgan? And does tech start to find its footing? Traders are going to try to figure out whether this is the spot to dip your toe in,” he said.

JP Morgan stock has lost 6.2 percent this week so far. “If it reacts well, that could help an oversold bounce. Right now, it’s not pricing in perfection or a beat. The stock got hit pretty hard. All it has to do is be in line, and [CEO Jamie Dimon] has to sound somewhat optimistic, and I do think there will be a relief rally.”

IBAN vs. a SWIFT Code: Understanding the Difference

How is rollover interest calculated?

Is This the Best Cybersecurity Stock?

Why The New York Times Company Rose 26% in January