Shares of U.S. companies with significant exposure to overseas markets plunged Thursday after their earnings reports validated growing worries about a slowdown in the Chinese economy and higher input costs due to the Trump administration’s tariffs.

“And then we have seen material costs. For example, we source U.S. steel. But U.S. steel rose I think 30% the last 18 months, and we have absorbed it,” said Snap-on CEO Nick Pinchuk during the company’s third-quarter earnings call.

“Our general position on tariffs has not altered significantly. We believe we are less impacted than most companies because we tend to manufacture primarily in the countries where we sell the product. … Pricing for domestic steel, however, has risen substantially over 18-24 months. On the other hand, we’ve been able to absorb and more than offset that rise with productivity gains.”

“There is some pressure obviously on raw material pricing. Largely, we have contracts across the company mitigating most of that. Remember, we do most of our production in countries for those plants because you have to be close by anyway. There’s a great deal of uncertainty around the tariffs and around the Brexits of the world which we are seeing some impacts of that. There’s just caution right now in the global auto original equipment manufacturers, and that’s coupled with I think just an overall softening a bit of the global auto OEM manufacturing.”

The group contributed to the negative sentiment Thursday on Wall Street about the global economy, which took the Dow Jones Industrial Average down more than 400 points. 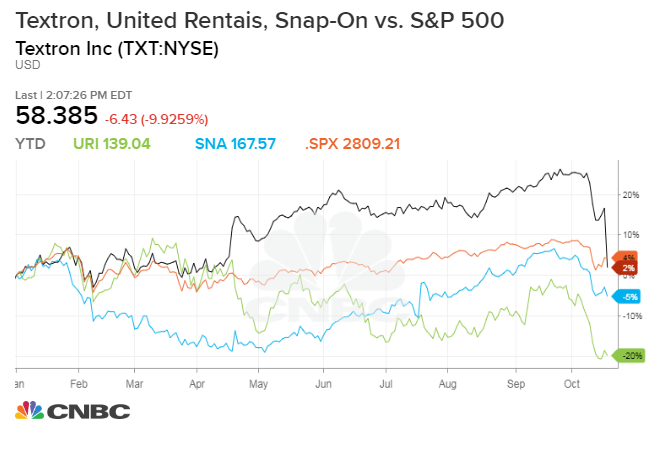 Textron and Snap-on shares both flirted with bear market territory Thursday. Caterpillar fell to more than 21 percent below its own 52-week high. United Rentals is down more than 30 percent from its March 2018 high.

The declines Thursday came as China’s equity meltdown continued, with the Shanghai Composite falling another 3 percent Thursday. The index is down more than 25 percent in the last 12 months.

Washington and Beijing have swapped tariffs and other trade threats over the last year. In the latest barb, the Trump administration imposed 10 percent tariffs on $200 billion worth of Chinese imports, with a provision to raise those tariffs to 25 percent at the end of the year barring an agreement.

The administration’s 25 percent tariffs on steel imports and 10 percent tariffs on aluminum imports, coupled with a strong economy, have sent domestic steel prices skyrocketing. Futures for hot rolled steel have climbed 37 percent over the last year.

Market strategists, including Wells Fargo’s Peter Donisanu, have highlighted the trade war and tariffs as a major drag on Shanghai markets as well as the Chinese economy. The marked decline in the world’s second-largest economy could impact all countries that trade with it, he said. 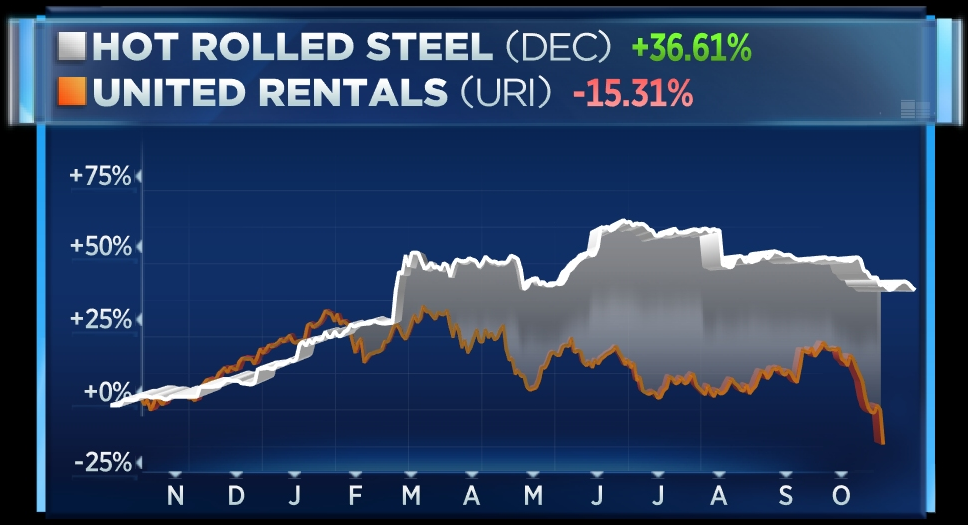 “The broader picture is what could happen to the economies, the bigger economic impact, and if we did go down that path of rapid escalation, that could affect Chinese economic growth which is currently on a path toward slowing,” the strategist wrote earlier in the year.

Continuing GSE conservatorship is a bad deal for taxpayers

In Santa Fe, a push for affordable housing

The Benefits of High-Dividend Yielding Stocks