Bears hit the cryptocurrency market today, and Ethereum was among the most severe casualties.

The world’s third largest cryptocurrency erased as much as $2.25 billion from its market cap. Meanwhile, its value plunged 12 percent from an intraday high at $177 to $155.60 – its new intraday low – within a few hours, according to aggregated data available at CoinMarketCap.com. Aayush Jindal, a crypto market analyst at NewsBTC, predicted further declines in the Ether-to-dollar market, citing a critical bearish trendline that is capping every upside attempt of the digital currency. 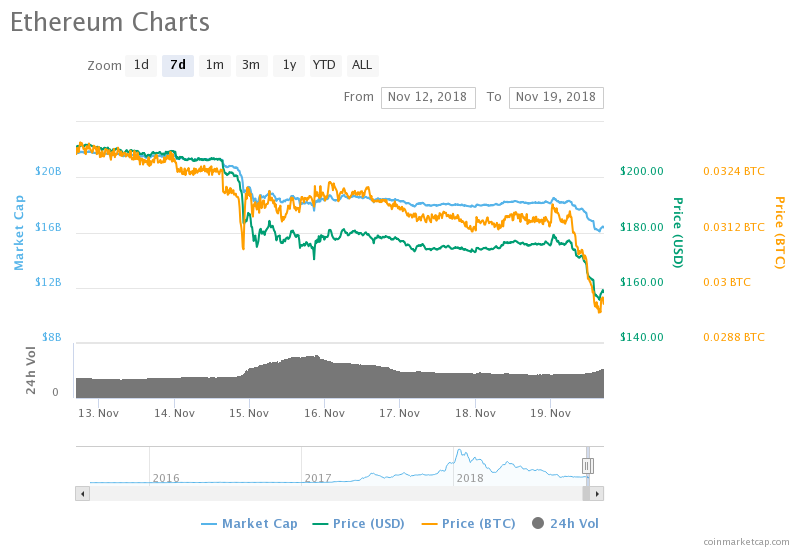 “There is a key connecting bearish trend line formed with resistance at $178 on the hourly chart of ETH/USD,” he forecasted.

A report coming at the behest of Diar, a daily crypto newsletter, also found strong bearish catalysts that point to an extended selling action in the Ethereum market. The study based its bearish prediction on the possibility of the leading ICO projects liquidating their ETH holdings.

“Some of the most popular and anticipated projects, most of which have yet to launch, are sitting on treasuries north of $500Mn. That’s excluding their cash on hand, as well as their own token reserves,” Diar research found.

Larry Cermak, head analyst at Diar, believed that these decentralized applications project would become unprofitable. Meanwhile, they will continue shorting Ether to cover their expenses against the lower market demand. The imbalance will prove bearish to the Ethereum market, overall.

“Obviously, a lot of the ICO companies will continue selling ETH to cover operating expenses and to fund their businesses,” Cermak said in a tweet. “It’s important to realize that the majority of these projects isn’t generating any revenue. And most likely never will.”

The Diar analysis offered its predictions based on how ICO projects would behave with their Ether holdings. It provided a more straightforward view of the projects that reportedly holds roughly 3.7% of the total Ether coins in circulation. While the likelihood of ICO project selling their entire holdings is high, the same cannot be predicted on the demand side which keeps fluctuating.

Retail investors, hedge funds and every other speculator could keep looking at Ether as an investable asset, similar to Bitcoin. On the other hand, blockchain projects could create network effects for their platform growth and use Ether as money or store-of-value.

Then, scalability should continue to challenge the Ethereum network and hamper its adoption rate at a larger scale. Other projects are also developing in the blockchain space to circumvent Ethereum’s shortcomings but even they are facing challenges over some factors related to feasibility – and even decentralization.

In a near-term scenario, the Ethereum market should act on the whims of speculative investors. That means, an extended selling action should establish a new bottom and retrace its steps to find an equally crucial resistance – just like Bitcoin.

Hawaiian Airlines Will Buy Boeing’s 787-9 Dreamliner, and It Makes No...

In choppy markets, these stocks will be the first ones hedge...