Apple is getting crushed again this week.

Monday’s losses pulled its stock back into a bear market, having fallen 20 percent from the Oct. 3 record high, while November’s drop puts it on track for its worst month since September 2008. Its decline has wiped more than $220 billion from its market cap in a little more than a month.

“The stock is surely succumbing to broadening market weakness. It’s below this $194 support level that we’ve been highlighting,” Ari Wald, head of technical analysis at Oppenheimer, said Monday on CNBC’s “Trading Nation.”

However, Wald says looking further out, the case for Apple looks strong.

“We’re recommending for our longer-term clients that are benchmarked against the S&P 500 to stick with it,” Wald said. “If you look at the stock relative to the S&P 500, support levels are still intact, it’s still correcting back into its six-year breakout versus the market dating back to the year 2012 and it’s still in a relative uptrend as well dating back to 2016.” 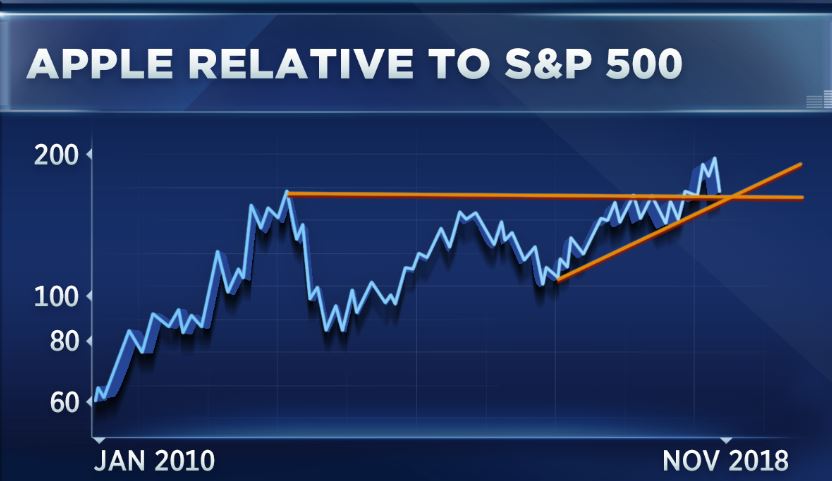 Even after the month’s losses, Apple is still outperforming the S&P 500 for the year. It is up nearly 10 percent in 2018, far better than the 0.6 percent gain on the benchmark index.

“Perhaps it looks like it needs to stabilize a little bit more, but we think you give it a little extra flexibility. We think it’s OK for the long-term,” Wald added.

Stacey Gilbert, head of derivative strategy at Susquehanna, says the options market is pricing in some signs of stabilization at these levels.

“We may be at least approaching a bottom, if it be just temporarily here,” Gilbert said on “Trading Nation” on Monday. “Within the options space, there seems to be suggestive flow that we’re trading between this level and maybe $195, that we may be range-bound.”

This, says Gilbert, is an interesting setup after years of options traders expecting more upside.

“As the market de-risks over the last couple of months, we’ve seen that shift in Apple as well,” said Gilbert. “What we’re seeing in Apple from a flow sentiment is that we may be much more range-bound rather than breaking out to the upside or at least seeing any more weakness here.”

Apple finished Monday’s trading day at $185.86 a share. It is down nearly 18 percent for the quarter, putting it on track for its worst performance in six years.

One-third of baby boomers had nothing saved for retirement at age...

Business credit card application denied: Why, what to do

9 Reasons to Say No to Credit

Succeeding At The Series 63 Exam