The EOS network is decentralized until it is not.

A block producer for the EOS blockchain has publicly engaged in a money-for-vote activity. Starteos, as the node is called, announced that delegating its node as a proxy would allow users to earn a stable income in EOS tokens. As the node is originally a game launched on the top of the EOS blockchain, it also offered its potential delegates “the corresponding amount of general game tokens,” which they can use to play Lucky Fruit Slots Machine and [again] receive revenue in EOS tokens.

The whole advertisement appears in contrast to what EOS promised in its original whitepaper: an easily scalable and decentralized and democratic blockchain network. However, the project has faced criticism for limiting the rights to add blocks to only 21 nodes. Each of these nodes is selected upon a democratic voting process. In a way, the reason why a transaction on an EOS blockchain should appear faster than others is that it doesn’t have to be confirmed by the entire network. Users directly elect 21 representatives to do it for them.

However, an ideal decentralized network contains thousands of such nodes, confirming transactions and adding them to their respective public ledger. The process remains dependable unless a single entity gains control of more than 50% of the blockchain network. In a system that is primarily distributed, it is unlikely to happen.

In the case being discussed, Starteos is one of the 21 nodes engaged in offering EOS rewards to users who vote for its node to stay in power. The practice leads to a bad experience for competing nodes that have a smaller number of EOS coins, indicating that only wealthy entities would govern the EOS network down the road.

The EOS rate against the US Dollar, meanwhile, has dropped by more than 10% in the past 24 hours, trading at 2.55 at press time. While the correction appears to be in line with an overall market trend, the losses EOS/USD is facing is way more than what met by other top coins. For instance, Bitcoin Cash, the second worst-performing top coin on a 24-hour basis, has dropped 6%. Bitcoin, the largest digital currency, is stable after noting only 0.5% drop within the same timeframe. 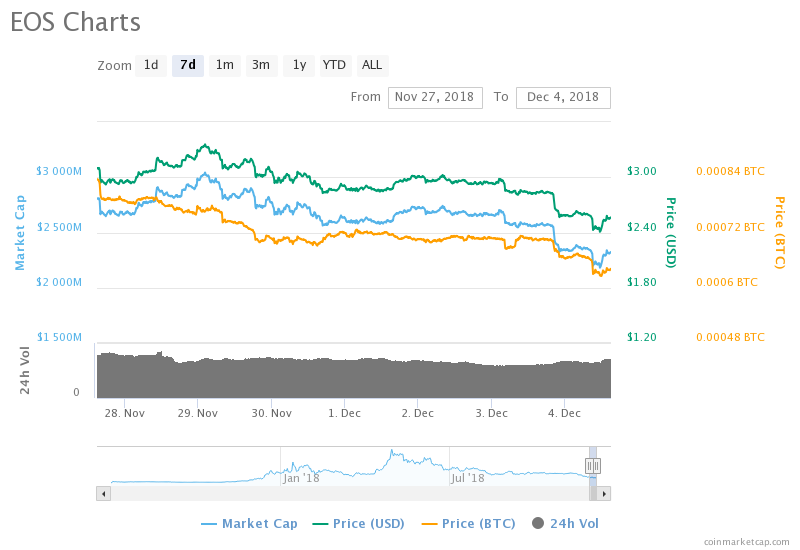 A direct correlation between Starteos’ announcement and EOS price drop cannot be established due to a week-long difference between the two events. However, the news could hurt the long-term prospective of the network unless it improves upon its infrastructure to make its platform more decentralized as originally promised.

EOS (EOS) is now available on Coinbase – The Coinbase Blog

‘Lit’ Is Over, and Other Things You Can Pay Teens to...