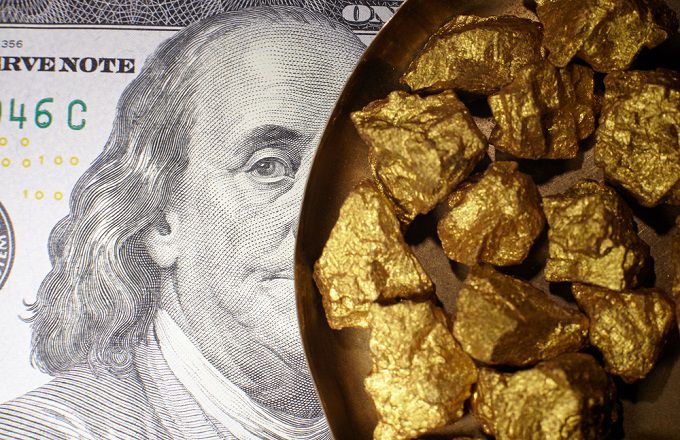 Gold has gotten a lift from recent remarks by Fed Chairman Jerome Powell, indicating that interest rates may be approaching “neutral.” If so, the central bank will slow its rate hike activity in 2019, allowing the yellow metal to test critical resistance levels that have frustrated gold bugs for the past five years. Hopefully, Powell will clarify his apparent dovishness at the press conference that follows the Dec. 19 interest rate decision.

Gold could also benefit if the U.S. economy slows down but inflation continues to grow as a result of protectionist policies that are adding hidden costs to everyday consumer goods. The Fed may be hamstrung in that doubly bearish scenario, forced to sit on its hands or even reduce rates to deal with an impending recession. Worldwide political tensions could generate higher gold prices as well, bolstering the commodity’s long-held reputation as a safe haven.

The next 90 days will clarify gold’s 2019 trading tone, with market players squarely focused on the trade standoff between China and the U.S. A duty increase to 25% and an expansion of the tariff hit list may shock the U.S. economy into a cyclical contraction while gold bugs get major relief after years of watching their favorite trade go nowhere. Conversely, an agreement and rapprochement could add another leg to the aging bull market while gold drifts back toward $1,000 per ounce.

The SPDR Gold Trust (GLD) bottomed out at $68.81 in November 2008, which corresponds to $681 on the gold futures contract. It returned to resistance at the 2008 high near $100 (and $1,000) in the first quarter of 2009 and dropped into a sideways pattern that completed the handle within a cup and handle breakout pattern. Buying signals erupted in September 2009 when the yellow metal cleared resistance and entered one of the strongest trend advances in modern history.

The commodity nearly doubled in price into September 2011, finally topping out at $185.85 (and $1,911.60), and turned sharply lower into January 2012. The decline settled near $150, yielding a sturdy bounce that carved the next leg within a descending triangle top. That bearish pattern completed in April 2013 and broke to the downside, establishing a major barrier that gold may not mount in our lifetimes.

Gold hit bottom near $100 (and $1,000) at the end of 2015 after a long series of lower highs and lower lows, and it turned higher in a strong recovery wave that stalled above $130 ($1,300) in July 2016. The fund and futures contract have traded within the boundaries of that eight-month price swing for the past two and a half years, highlighting intense inertia that may take a system shock to dislodge. Unfortunately, the disruption of free trade could generate that bearish catalyst.

The first swing high after the 2013 breakdown now marks the initial point in a descending trendline (red line) that has organized the past five years of price action into a potential inverse head and shoulders bottoming pattern. Testing in the first and second quarters of 2018 failed to mount resistance, while the downturn into August has posted a potential higher low. Along with bullish monthly cycles, this price structure should generate another test at resistance in the first or second quarter of 2019.

A breakout would yield a measured move target around $160 (and $1,600), but the 2013 breakdown could undermine that prediction, at least in the first rally wave. The .618 Fibonacci retracement of the three-year decline could offer a more reliable target, lifting the fund and contract above $150 (and $1,500) for the first time since April 2013. In turn, that could yield more challenging price action, with heavy resistance denying gold bugs’ hopes for a rally to new highs.

Gold could benefit from world trade tensions and a more dovish Fed in 2019, finally breaking out above five-year resistance.

<Disclosure: The author held no positions in the aforementioned securities or derivatives at the time of publication.>

Mauritian central bank to use $2 billion of reserves to fund...

How you may be violating your card’s terms of service

Credit unions not out of the woods yet with Warren’s latest...

How Much Is Your Used Nintendo Worth?

Getting started in stocks