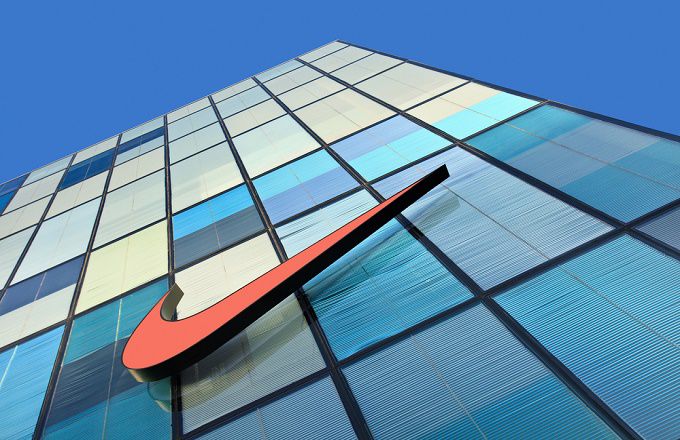 Dow component Nike, Inc. (NKE) may complete an intermediate correction in the coming weeks and post new highs in 2019, despite current trade tensions. That would mark quite a feat for the sports apparel manufacturer, which imports many Chinese goods and products on the Trump administration’s tariff list. Fortunately, mitigating factors could turn the tide and lift this issue back into market leadership.

The company has taken steps to diversify into other production hubs in recent years, dampening the tariffs’ potential impact. In addition, enthusiastic customers already pay footwear duties between 11% and 68%, mandated by the Smoot-Hawley Tariff Act of 1930. That tailwind – along with new factories in Vietnam, Cambodia and Indonesia – could help Nike achieve 2019 profit targets and rise to the top of the Dow performance heap. Even so, market players should act defensively until price action completes testing at critical support levels.

The stock bottomed out at a split-adjusted $1.35 in 1993 and turned higher, entering a strong uptrend that continued into the first quarter of 1997, when it stalled at $9.55. That marked the highest high for the next six years, ahead of broad range-bound action that eventually found support near $4.50. It cleared the prior high in 1994, but buying interest failed to develop, yielding narrow sideways action on top of the breakout level.

Patient shareholders got rewarded in the second half of 2006, when the stock took off in a healthy uptrend that lost momentum in the upper teens in 2008. It sold off to the 2004 breakout level during the economic collapse and held that support level into 2009, when a recovery wave took control, lifting price back to resistance at the prior high. A 2011 breakout signaled a significant change in character, giving way to the biggest trend advance so far this century.

The rally ended in the upper $60s in 2015, yielding a volatile correction that carved the outline of a symmetrical triangle pattern. The stock transitioned from market leader into laggard during this period, forcing many investors to hit the sidelines. That changed in late 2017, when a triangle breakout attracted intense momentum buying interest, lifting Nike shares to an all-time high at $86.04 in September 2018.

The decline into November reversed on support at the May 2018 breakout (red line) above the 2015 high, which has roughly aligned with the 200-day exponential moving average (EMA). The stock has crisscrossed this price zone four times into December, building an expanding wedge of higher highs and lower lows. This instability suggests that lows will get tested once again in the coming weeks, perhaps generating the next leg in a triple bottom reversal.

A Fibonacci grid stretched across the rally wave that started in October 2017 places the 50% retracement right at the 2015 high (blue line), while the November bounce started two points above that level. Given the expanding wedge, the current downswing could undercut that low and hit the breakout level dead-on, perhaps signaling the end of the correction. We’ll have to wait and see how the monthly stochastics oscillator behaves if that happens because the current sell cycle still hasn’t approached the oversold level.

The on-balance volume (OBV) accumulation-distribution indicator posted an all-time high in September 2018, perfectly aligned with price, and fell into late October. It has held above that low into December, indicating shareholder loyalty in a tough market environment. This resilience should allow the stock to bottom out in the coming weeks, but a breakdown to new indicator lows is likely to set off more aggressive sell signals.

Nike stock is showing relative strength at 2018 breakout support and the 200-day EMA, raising the odds that it will bottom out soon and continue its bull market run in 2019.

<Disclosure: The author held no positions in the aforementioned securities at the time of publication.>

Hedge funds had their best first quarter in 13 years