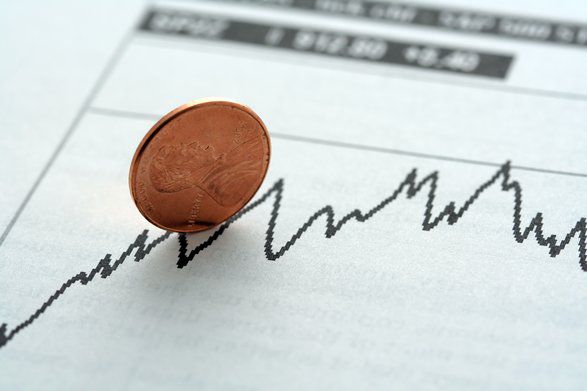 Can we all just move on from the past few months? We saw tough markets in October, to say the least, with a bit of strength in November, which was much too temporary and fleeting. Trillions have been melted off stock valuations in the past nine weeks, and the Dow Jones Industrial Average, NASDAQ and Russell 2000 are under pressure.

Of course, any good technical analyst (TA) knows that there is money to be made in either direction. Volatility is the friend of the TA trader, and we seem to be getting more than our fair share of significant moves.

The big question is: Which scenario are we dealing with? Either we just saw a temporary and healthy stumble in the markets, making way for investments to resume their drive higher… OR… There has been a complete and irreparable shift in the psychology of investors, and all the over-exuberant faith and speculation in the economy and equities has gone into “full trend reversal” mode.

Spoiler alert: It is option two.

Now your job as an investor becomes picking out those most compelling short-term opportunities as we hurtle face first into what may become the most-historically significant recession we will see in our lifetimes. Starting with a few of the stocks mentioned below could perhaps be a good start to profiting through the uncertain times.

After a long-term downtrend from $1.80, the shares just showed their first signs of reversing. A huge surge in trading volume has indicated that there is a lot of commitment among investors. On Oct. 23, a doji pattern formed on the candlestick chart, which often indicates indecision among investors and thus a probable trend reversal.

The subsequent day’s trading was very bearish, with U.S. Auto Parts Network shares closing at their low on the day. As well, the stock demonstrated a significant amount of selling into any strength, as evidenced by long upper wicks on a few of the more recent candles. However, that was followed by three straight days of positive trading, culminating in a gap up on Oct. 29.

Watch for trading activity to remain high, which will demonstrate commitment among investors to the possible trend reversal. As long as prices remain above $1.10 support and trading activity remains strong (or even increases from current levels), U.S. Auto Parts Network stock may enjoy a few strong weeks as it travels higher, although it would be very unlikely to break above the former resistance level at $1.50.

Last month’s downtrend has put shares of Goldfield into heavily oversold territory, with an RSI of less than 20 for the last week. Out of the past 14 days, 10 days showed negative candles on the chart, but that trend is finally being challenged with positive candles two days in a row, which often marks a shift in the psychology of current and prospective shareholders (from negative bias to positive).

I would feel more confident in Goldfield’s technical analysis findings if they formed with much higher trading volume. However, that low to moderate activity may present an opportunity, in that if (and as) you see the volume increasing from these levels, that may add strength to any move higher. That would also act as a confirmation that the bulls are moving back in, while at the same time indicating that the sellers and bears are increasingly moving to the sidelines.

If this reversal plays out as I expect, newer Goldfield shareholders may be getting involved at precisely the right time, with the entirety of this potential uptrend ahead of them. Watch that Goldfield stock holds above the $2.40 level and that trading activity hits at least 100,000 shares per day. If shares dip (at the close, not intraday) to $2.39 or lower, jump ship quickly and take a very small loss to live to fight another day.

This one certainly looks like a breakout. Shares have just punched above the $3.10 price point, which is significant because it represents a former potential resistance level from two weeks ago. Previous to that, the same $3.10 level was mild support one month ago.

Consider a quick stop loss sale if the shares break down below the $3.10 price level. To be a bit more aggressive and to take into account the natural volatility of any stock, some traders may want to set their stop loss trigger prices at $2.99. Ejecting at that price point in a negative scenario limits your downside risk to about 4%. The upside scenario sees Halcon Resources shares going back toward resistance at $3.80.

A “sloppy” pennant set-up is appearing on the chart over the past two weeks, and I believe this will be a typical (and temporary) pause before a resumption of the upward trend. Significant increases in trading activity lend support and add weight to the momentum of the move.

Wait for a breakout to the upside to mark the move beyond the pennant pattern, a resumption of the upward trend and confirmation that this is in fact a continuation pattern on a long run higher.

What an ugly chart, and what an ugly downtrend from $1.85. Yet, what a beautiful opportunity that has presented itself.

A few days ago, Gold Standard Ventures had a very negative day on significant activity. That may have been an inflection point and probably a full reversal of the trend that has been battering shares for two straight months.

The very next day saw double the activity and the third most positive gain in the past two months. Shares gapped higher on the next day, demonstrating that investors are getting behind this bullish move in a big way.

You may want to treat $1.10 as a hard stop eject point. If shares do break down below that level, the subsequent downside may be intense. However, if Gold Standard Ventures stock can maintain closing levels above $1.10, this one may be very likely to charge back toward $1.40 in its first bullish phase, plus go toward $1.60 shortly thereafter.

The cup-and-handle pattern is one of my favorite chart indicators and often presages a swift and significant pop higher in prices. EXFO is demonstrating an imperfect set-up but still one that seems strong enough to imply stronger prices to come.

A typical cup-and-handle pattern has several phases, which is often why you may never see a perfect one. However, the implications remain. Phase 1 is sideways trading, followed by a share price collapse (phase 2), and then more range-bound, flat activity that forms the bottom of the cup (3). Next is phase 4, which tends to be a big jump in share price, then a drop off from that bounce (5), followed finally by sideways trading (6) to form the handle (and set up a tight trading range as shareholders turn over and consolidate at this new level).

It is phase 6 where the pattern breaks down for me. Ideally, we’d see a very tight trading range, but in this specific case with EXFO, the final phase of the pattern is much too loose.

Aggressive investors with a respectable risk tolerance may want to take a chance on EXFO. The pattern will probably hold up, and generally, a cup and handle (even a messy one like this) leads to a strong spike toward higher levels.

Just be ready to jump ship at the first sign that the expected outcome is not going to materialize within the next week.

Not yet, but soon… Keep a close watch on this one, because ARC Document Solutions is likely about to hit an inflection point and start trending higher.

The price direction is morphing from a mild downtrend over the past few weeks to sideways trading. This is causing the nine-day exponential moving average (EMA) to gear up to cross higher above the 18-day EMA, which can represent a buy point to various analysts.

In addition, $2.45 is becoming a more reliable support level as each day passes.

If you were to get in at these prices, be ready to bail out with a stop loss if the shares dip below or toward $2.40. You will know which direction this one is going within a few weeks, if it even takes that long.

This one is all about shareholder turnover. Since its IPO in December of 2017, iClick has been (mainly) in an elongated downtrend, from $11.40 at its peak to where the shares trade now at $3.76.

However, over the past month, iClick stock has traded sideways. The range-bound trading activity demonstrates that the shareholder base is turning over very well. Typically, in the longer term, frustrated shareholders sell, and those shares get bought up by newer investors who have a much more bullish view of the potential direction of the shares and are thus less likely to sell any time soon.

In the 19 trading days (up until and including Nov. 30) that saw the sideways trading, just under 2 million shares were exchanged, which represents about 5% of total outstanding shares (and that percentage is growing by the day).

There are very diverse opinions about where the markets and economy will head next. Both sides make very compelling arguments, and no one knows who will eventually be “right,” or even how correct they may turn out to be weeks or months from now.

That is what makes short-term TA trades more important than typically, since they generally allow you to stay more liquid and thus take advantage of opportunities as they arise. It turns out we are in just such a scenario, with more numerous and significant compelling trades than we’ve seen since February of last year.

Peter Leeds is the author of several books, including the international bestseller, “Penny Stocks for Dummies.” He and his team also issue a newsletter devoted exclusively to penny stock picks and analysis, as well as a popular YouTube channel – PeterLeedsPennyStocks.

<Important disclaimer: Penny stocks are volatile and can generate catastrophic losses. Price levels in this article are hypothetical and do not represent buy recommendations or investment advice. Keep in mind that it’s your responsibility to make trading decisions through your own skilled analysis and risk management. The author held no positions in the aforementioned securities at the time of publication.>

8 of the Richest Gangsters of All Time

Nike Is a Growth Company

Why IPO Star Uber Faces A Rough Road Ahead

The Cost of Buying a McDonald’s Franchise (MCD)

1 Big Improvement That Apple Needs to Bring to the New...

3 Stocks That Could Put NVIDIA’s Returns to Shame

What is a 10-Year Treasury Note?