“Next week is a very big week. Lighthizer is clearly a hawk,” said Tom Block, Washington strategist at Fundstrat. He said it will be important to see a positive tone after the meeting, as none of the other sessions have been downbeat. “They gave a good cop, bad cop team going over there. It will be very important how that communique comes out after the meeting.”

Economists believe the U.S. and China will ultimately come together because the trade war is hurting both countries.

November trade data showed the U.S. trade deficit narrowed sharply. Both imports and exports declined but the drop off in imports was larger.

“That showed a sharp drop in imports of 3.6 percent month on month. That’s a big drop. We also got trade data for Asian exports to the U.S. for December. Asian exports to the U.S. in December were down 10 percent,” said Carpenter. “I do think trade matters…when you start to affect the U.S. and China, you’re by definition talking about a global phenomena. The U.S. economy is big. The Chinese economy is big Put them together, and it has to register on a global scale.” 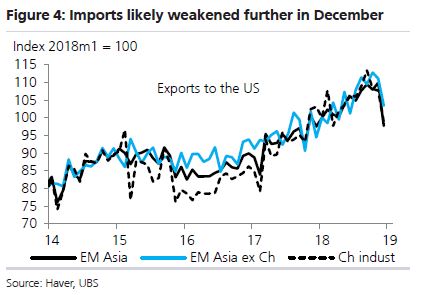 Block said there’s a fog of trade issues currently, and even though he expects a deal, the outcome with China is still uncertain. He also notes that the reworked trade agreement with Canada and Mexico is not adopted yet, with both Republicans and Democrats in Congress seeking changes.

Strategists expect if the Commerce Department does move on auto tariffs, the administration would wait to respond until after it has a deal with China.

“We think China has shown some willingness to make some concessions,” said Ciitigroup economist Cesar Rojas. “For example, on IP protection, in a different forum, the government has pledged more strict protection…There has also been some news suggesting they will push for legislation on core technology theft.”

Rojas said the sticking point will be in the details and whether China follows through and whether the U.S. can be satisfied with enforcement.

“If there is a positive tone, then our expectation is there could be a roll over of the deadline in recognition of progress in the negotiations, and therefore the trade representative would move forward. If the tone is not positive then that would hint at the potential escalation, but still we are about tow more weeks ahead of that deadline,” Rojas said.

If the Commerce Department proposes tariffs on European autos, it would not be a surprise, given Trump’s criticism of German luxury vehicles in the U.S. despite the fact that BMW and Daimler are also U.S. manufacturers.

“We expect the report will recommend tariffs,” said Rojas. “The administration is likely to push for trade talks…What we’re seeing are signs of a slowdown in the European economy… to come up with this threat of additional tariffs when they were relatively weak gives the U.S. additional leverage.”

Jerry Jones And The Cowboys

What is the difference between work in progress and work in...

What Is the Best Financial Analysis Software?

US Stocks Hold On to Much of an Early Rally; Oil...

T-Mobile Is Taking on Big Cable