Technical analysts say more bullish signs for stocks are showing up in the charts.

The S&P 500, for one, closed above a key technical level Tuesday, when it finished above its 200-day moving average for the first time since Dec. 3. The S&P rose 1.3 percent Tuesday to 2,744, one point above the 200-day, a momentum indicator based on the average price move over a 200-day period. 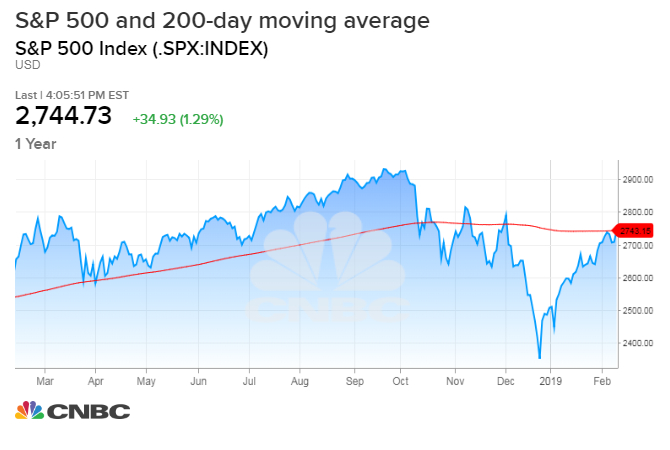 “It should open the door to 2,800 now…It does feel like the advance/decline line is really strong. The broad-based rally is strong. We have two days of overseas markets rallying. It doesn’t seem as if it’s a fake out for now…The active bulls keep stepping up where they have to,” said Scott Redler, partner with T3Live.com who follows the market’s short-term technicals. Advancers led declining issues by three-to-one on the New York Stock Exchange Tuesday.

“It was another obstacle that this wall of worry got above,” said Redler. He said traders became more confident when the S&P 500 regained the psychologically important 2,700 level on Friday, and now that the S&P has regained the 200-day, it is signaling more gains ahead.

Stocks were higher Tuesday amid optimism for the China trade talks and a tentative deal to avoid a government shutdown.

Fundstrat technical analyst Todd Sohn said the more time that passes, the less likely it is the S&P 500 will retest the December lows. “You could get a pull back to 2,550 to 2,600, and that may be all you need,” he said.

“I do like what I’m seeing. It’s important to remember the S&P is up 17 percent over 32 trading days. It’s a really good run, and I don’t want to stand in front of it but at some point, it’s going to need to pause for more than two or three days,” said Sohn.

People on the move: March 27

Why Choosing the Right Words for Your Marketing Campaign Can Be...

No one knows what to call the hottest cryptocurrency

The December Stock Rally May Not Happen This Year

This 8-Figure Business Didn’t See Growth Until It Stopped Focusing on...

The ‘fear gauge’ shows the market is headed for ‘choppy waters’