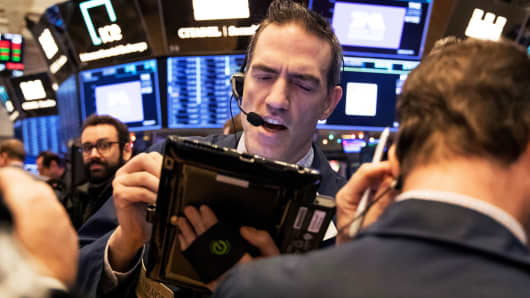 Broadcom — Shares of the chipmaker jumped more than 9 percent after the company reported better-than-expected earnings. Broadcom posted earnings per share of $5.55, while analysts polled by Refnitiv expected a profit of $5.23. The company said its results were impacted by slower demand out of China, but noted much of that was reflected in its quarterly guidance.

Adobe —Adobe shares dipped 5.1 percent as the company’s weak earnings guidance overshadowed its strong quarterly numbers. The company said it expects second-quarter earnings around a median of $1.77 per share, below a Refinitiv estimate of $1.88. Adobe’s fiscal first-quarter earnings topped analyst expectations, however.

Jabil —Shares of the manufacturing services company rose as much as 2 percent on the back of strong earnings. Jabil reported quarterly earnings of 64 cents per share.

Boeing — Shares of Boeing erased losses to trade nearly 3 percent higher after Agence France-Presse reported the company will release a software upgrade for its 737 Max aircraft in the coming weeks. The slight reprieve for the company’s shares comes after a week of turmoil, following global safety concerns of the company’s 737 Max jetliners.

Facebook — Facebook shares fell 3 percent Friday, the day following the resignation of two of its executives — Chris Daniels and Chris Cox — in light of its recent pivot to privacy. The company also received scrutiny related to a terrorist attack in New Zealand in which the shooter live-streamed the attack on the social media site. At least 49 lives have been claimed by the shootings.

Bookstores finding creative ways to survive and thrive in the age...

Positive/Negative Potential Outcomes; Why This Time is Different

What’s the Yield Curve? ‘A Powerful Signal of Recessions’ Has Wall...

The Tax Reform Bill Congress Will Vote on Next Week

Here’s Why Sientra’s Shares Got a Lift Today