Morgan Stanley is calling for a full-blown earnings recession, while many other analysts see one negative quarter and a return to positive profit growth by the second quarter.

Michael Wilson, Morgan Stanley’s chief U.S. equity strategist, says he’s looking for two or more quarters of negative or flat growth, meeting the technical definition of a recession. Wilson, in a note, says first quarter earnings could be better than the forecast 4% decline in S&P 500 profits because of the propensity of companies to beat estimates.

But he added that in the fourth quarter, companies beat at a lower than normal rate of just 3 percent even though earnings estimates had come down significantly ahead of the reports.

“In other words, a lowered bar into the quarter does not mean the likelihood of a beat is greater. The forecasts for 1Q19 have been lowered substantially and we do not think we are going to see a beat big enough to lift index growth into positive territory,” he wrote.

The ratio of companies offering negative guidance compared to those forecasting positive results is the highest since the first quarter of 2016, the last year with quarters of negative earnings growth. At 3.3 times, the ratio is also above the average since 2005, supporting the view that companies should have ‘lackluster’ beats this quarter.

“This is where the rubber will meet the road for stocks. We’re comfortable saying that the stock market is well aware of the weaker earnings growth expected this quarter. However, the real question at this point is what the second half of the year will look like,” Wilson noted. 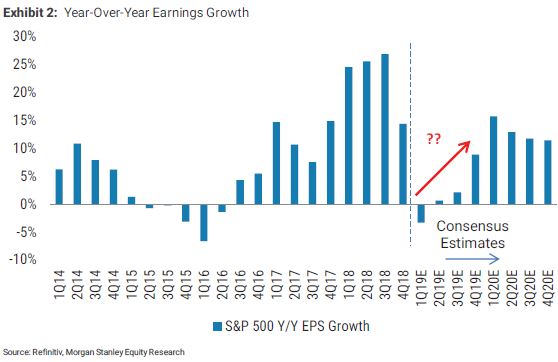 Bank of America Merrill Lynch analysts did reduce their S&P earnings forecast for the year Monday to growth of 4%, from an earlier forecast of 5%. The analysts forecast a 4% gain for the second quarter, and flattish again in the third quarter with an increase of just 1%.

Morgan Stanley’s Wilson also looked at sector level earnings expectations and said they are much worse in the first quarter than they were in the fourth quarter, when every major sector had positive earnings growth and just one had negative sales growth.

For first quarter, analysts expect seven of the 11 major sectors to have negative earnings growth. Among the sectors expected to be positive are health care, utilities, and real estate.

“The biggest drag on earnings is expected to come from Tech, which is predicted to contribute -2.1% to the headline number,” Wilson wrote. “Overall earnings growth in the sector is projected to be -10.6% with [subsectors] Semiconductors and Tech Hardware expecting substantial declines in earnings growth at -24% and -16%, respectively.”

Lebanon Fights for Separation of Money and State as Residents Use...

Investing in These Stocks Could Enrich Your Retirement

3 Top Index Funds for Your IRA