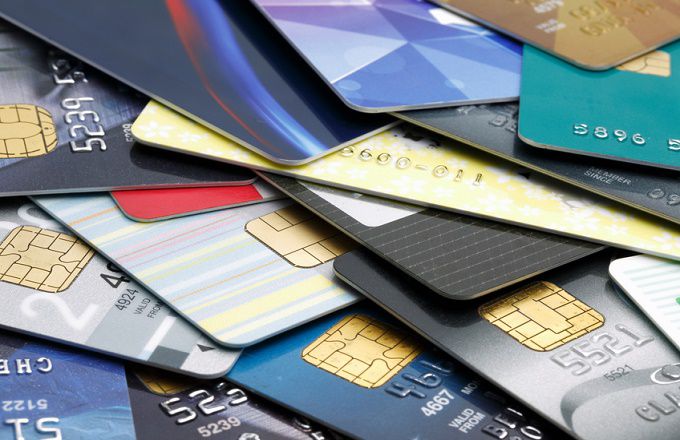 Dow component Visa Inc. (V) and rival Mastercard Incorporated (MA) broke out to all-time highs in the first quarter and have built on gains so far this April, lifting into market leadership. In fact, these financial giants are so well positioned in the digital era that they may continue their strong uptrends well into the next decade. Even so, both stocks are overbought and overextended after weeks of higher prices, raising the odds for sell-offs that shake out complacent shareholders.

Visa has lifted into the fourth slot in Dow Industrial leadership and is outperforming all financials in the venerable average, including rival American Express Company (AXP). However, it will take just a small downdraft to shift supporting technicals in reverse and drop Visa stock 15% into the 200-day exponential moving average (EMA), currently rising near $140. Mastercard shares could fall an equal percentage in the coming weeks, filling the January gap between $205 and $208.

Visa shares cleared 2008 resistance in the mid-$20s in 2011 and entered a powerful trend advance that paused in the upper $70s in 2015. Price action held firmly above the 50-week EMA during this period, exhibiting unusual strength, and resumed its upward trajectory in 2017. The stock nearly doubled in price into the October 2018 high at $151. 56 and turned sharply lower, grinding out a volatile correction that relinquished 30 points into late December.

The subsequent recovery wave reached fourth quarter resistance at $146 in February, paused for six sessions and broke out, mounting the 2018 high about four weeks ago. The rally posted an all-time high at $159.11 last week and reversed in a modest pullback that’s holding short-term support near $155. The on-balance volume (OBV) accumulation-distribution indicator has also reached an all-time high, confirming the breakout.

However, Visa stock hasn’t pulled back more than six points so far in 2019 and hasn’t touched the 50-day EMA since Feb. 2, signaling a strong but overextended uptrend. Meanwhile, the monthly stochastics oscillator has lifted into the most extreme overbought reading in the stock’s history, warning that the current rally trajectory isn’t sustainable. The first sign of trouble will unfold as a breakdown through the red 20-day simple moving average (SMA) near $155, which has held as support since February.

Mastercard stock topped out at $32.03 in 2008 and sold off during the economic collapse, dropping more than 60% into the lower teens. That marked a historic buying opportunity, ahead of a recovery wave that completed a round trip into the prior high in 2011. The stock broke out immediately, entering a channeled uptrend that added points at a rapid pace into the 2015 high at $101.76. It cleared that level after the presidential election and more than doubled in price into the October 2018 high at $225.35.

Bearish fourth quarter price action for Mastercard tracked a similar route as its credit card rival, unfolding through a series of volatile selling waves that ended in December at a 10-month low in the $170s. It turned higher into January, reaching horizontal resistance above $200 at the end of the month, and broke out one day later. The uptick then eased into a rising channel, clearing October resistance and gaining ground into the April 3 all-time high at $240.33.

A pullback has settled on short-term support, while the monthly stochastics oscillator has reached an overbought level that has generated four bearish crossovers since 2012. As with Visa, a breakdown for Mastercard through the red 20-day SMA would set off a short-term sell signal that could generate a positive feedback loop, dropping the stock into an intermediate correction stretching 15% to 20% to the downside.

Visa and Mastercard stocks have reached extremely overbought technical readings, raising the odds for a multi-week decline that shakes out the large supply of weak hands.

Why Best Buy Failed in China

86% of ICO Tokens Worth Less than at First Crypto Exchange...

Bonds on Autopilot Ahead of Fed Minutes and Treasury Auction

Bitcoin Price “Death Cross” 10 Days Out as BTC Stagnates at...

Garment District rezoning on track for approval by year’s end

GM must break through this level before it can head higher:...

How important are fleet sales to an automaker’s business?