Shares of Disney are on track to hit a 10-year high after the unveil of its new video streaming service, but the platform has some naysayers on Wall Street.

The media giant on Thursday announced its much-anticipated streaming platform Disney+, which will be rolled out on November 12. Disney Chairman and CEO Bob Iger claimed its company’s brand name gives an edge over rival streaming service Netflix, which he said is “still” building its brand. Disney’s stock surged as high as 12% on Friday, on pace for its best day since May 2009. Netflix shares fell on Friday.

However, some analysts covering the streaming space are doubtful of Disney+’s ability to disrupt Netflix’s dominant position, saying its family-focused content offering lacks quality and quantity compared to Netflix’s. 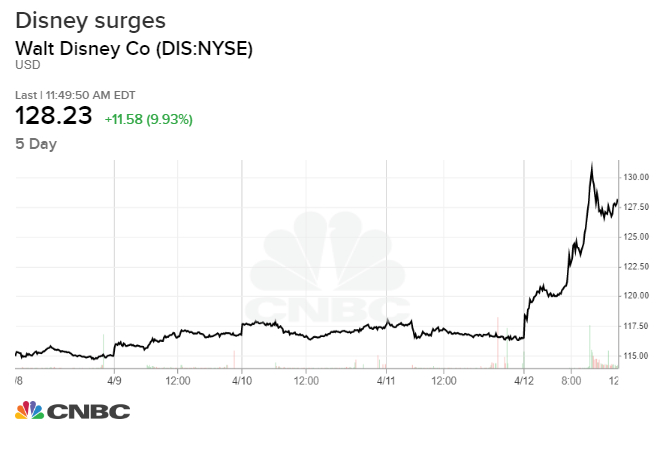 “We do not view Disney+ as a strong alternative to Netflix,” Suntrust tech analyst Matthew Thornton said in a note on Friday. “Bottom-line, Disney+ features family content, while Netflix offers a much broader range of content with the majority of the most-searched content on the platform.”

“While we expect Disney+ will likely be the most competitive streaming offering to Netflix, we still do not view it as a major threat to Netflix subscriber numbers given Netflix’s quality & quantity of content, along with the global secular shift toward streaming,” Anmuth said in a note to clients on Friday.

Disney is entering an increasingly competitive streaming war with rivals Netflix, Hulu, Amazon fighting for market share while various media companies such as Apple and NBC jumping on the streaming bandwagon. Disney expects to ramp up its original content with $1 billion investment in 2020 and $2 billion by 2024.

The company is also expected to reach between 60 million and 90 million subscribers by the end of 2024. One-third of those subscribers will be domestic and two-thirds will be international, the company said.

Bank of America to spend $5B in five years on affordable...

A recession indicator with a perfect track record over 70 years...