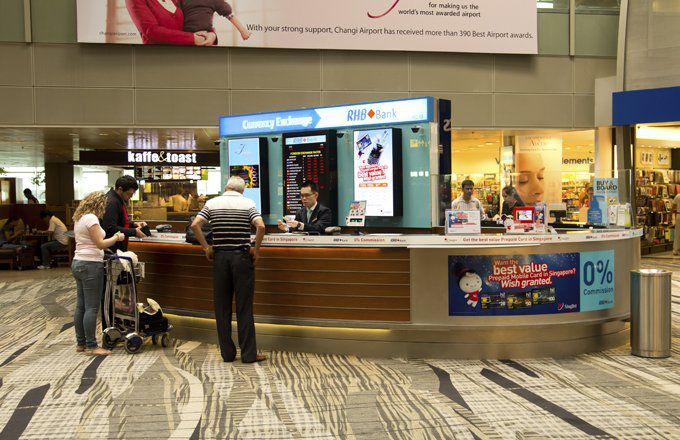 There is nothing like coming home from a great trip abroad thinking you had been really savvy about sticking to your budget only to be hit with unexpected currency-exchange fees on your bank statement and credit card bill.

For that reason, travelers should look to trade convert their currency before leaving for the airport. It helps if you have an idea of what a fair exchange rate is, so check key business websites first. Now, the best, and cheapest, places to convert currency include:

Although ordering cash online will likely include delivery charges and the exchange rate won’t be as good as with your bank, this is still a better option when compared to the must-avoid options below.

Now, almost every overseas traveler needs to exchange currency at some point during his or her trip. If you don’t know the tricks, it can be extremely expensive. Trading currency at the hotel, or even a currency kiosk in the country, can be costly—which includes poor exchange rates and high fees.

The best options for exchanging currency and saving fees include:

Piggybacking on the above, if you don’t have time or don’t want to carry a lot of cash, check to see if your bank has ATMs in the country you’re traveling to. Or, if they have banking affiliates there. A key tip is to use an ATM within the airport as soon as you arrive.

Now, when you’re back in the U.S., head to your bank or credit union to transfer any leftover foreign currency back to U.S. dollars. However, some banks won’t take foreign currency. As a last resort, if you have some foreign currency leftover while preparing to leave a country, look to convert at an airport kiosk or a store before leaving the country.

The world has become so digital that most people no longer walk around foreign countries with traveler’s checks and money belts. That’s why you should take both a no-foreign-fee debit card and a no-foreign-transaction-fee credit card with you on your trip. The likes of Chase, Bank of American, Capital One, and other major credit card issuers offer specific no foreign transaction fee cards.

Another reason it is best to use a no-transaction-fee credit card and use currency only as a backup is that your credit card will offer fraud protection. You can replace lost or stolen credit cards, but lost cash can never be replaced. However, don’t use your credit card for a cash advance to receive foreign currency. Doing so means you’ll get hit with a cash advance fee and a high-interest rate that starts accruing immediately.

The spread of technology has helped make using credit and debit cards capable nearly anywhere. However, some governments restrict the use of debit cards. Although the list is relatively small, it includes major names like Iran, Cuba, North Korea, Turkey, and Greece. Meanwhile, some countries are slow to adopt technology and may not be as credit card friendly as expected, such as Japan.

One thing to do before traveling abroad is to let your bank know you’ll be traveling. This includes any credit card companies. That way, if you use your credit or debit card abroad, these companies won’t cut off access to your account due to fraud worries.

Also, avoid paying in U.S. dollars when possible, even if a merchant offers to convert to USD for you. This includes paying with a credit or debit card. The merchant would likely convert at a rate that’s disadvantageous to you and potentially charge fees. The same goes for paying with USD in the form of cash.

Some places that you should avoid at all costs for exchanging currency when converting currency are:

If you do a little homework before leaving for your trip and check exchange rates you’ll save a pretty penny.

The whole story of New York’s failure on reproductive rights

Introduction to the Parabolic SAR

Here’s How Much the 9/11 Papers Hacker Group Has Raised so...

Bitcoin (BTC) Price Is Trading In Uptrend But Can Bulls Clear...