The stock has rallied more than 18% this year, already notching 20 all-time highs, its most records for the first four months of a year since 2012. However, after hitting a high in mid-April 2012, the coffee chain plunged more than 30% through July.

One chart watcher sees a similar setup this time.

“Here’s a stock that looks great on the chart on a very long-term basis. Near term, it’s getting a little extended, though,” equity strategist Matt Maley said Wednesday on CNBC’s “Trading Nation.”

Starbucks has bounced 61% off its 52-week low set last June and has tripled the S&P 500’s gains over the past six months. 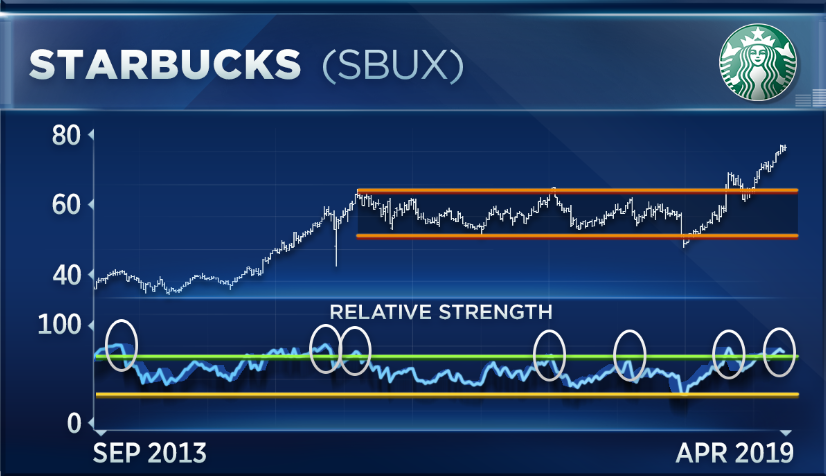 “If you look at not just its daily RSI chart but its weekly RSI chart, it’s getting very extended and it’s now up to levels where it usually tops out,” said Maley.

Starbucks’ relative strength index, a measure of momentum, peaked above 80 two weeks ago. Any reading above 70 typically suggests overbought conditions. It now reads 66.

“When you get this much of a rally and get this extended, once you get past the earnings, it may get one more boost, but I think you’re going to get an opportunity to buy at lower levels over the coming weeks, so I’d rather buy it on weakness than chase it up at these levels,” he said.

Starbucks is scheduled to report quarterly earnings after the bell Thursday.

Quint Tatro, founder and president of Joule Financial, says the earnings report could be the one to take Starbucks shares lower.

Analysts surveyed by FactSet anticipate 3% same-store sales growth for its March-ended quarter, a slowdown from its 4% growth in the December quarter.

“Investors probably, again having gotten a little bit ahead of themselves, sell that. I would, however, agree that it’s a buy on pullbacks,” said Tatro.

Another Spitzer? Mayor says next attorney general must be ‘sheriff of...

Burn Rate Is a Key Factor in a Company’s Sustainability

There was mysterious selling in FedEx on Tuesday before poor earnings...