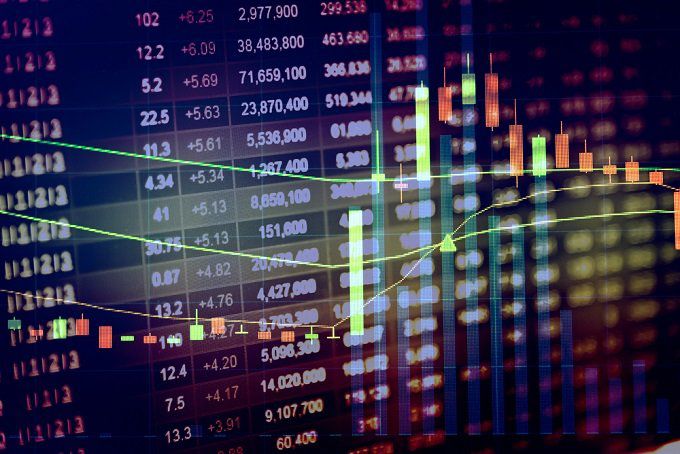 Candlestick charts originated in Japan over 100 years before the West developed the bar and point-and-figure charts. In the 1700s, a Japanese man named Homma discovered that, while there was a link between price and the supply and demand of rice, the markets were strongly influenced by the emotions of traders.

Candlesticks show that emotion by visually representing the size of price moves with different colors. Traders use the candlesticks to make trading decisions based on regularly occurring patterns that help forecast the short-term direction of the price.

Just like a bar chart, a daily candlestick shows the market’s open, high, low and close price for the day. The candlestick has a wide part, which is called the “real body.”

Traders can alter these colors in their trading platform. For example, a down candle is often shaded red instead of black, and up candles are often shaded green instead of white.

Just above and below the real body are the “shadows” or “wicks.” The shadows show the high and low prices of that day’s trading. If the upper shadow on a down candle is short, it indicates that the open that day was near the high of the day.

Bar charts and candlestick charts show the same information, just in a different way. Candlestick charts are more visual, due to the color coding of the price bars and thicker real bodies, which are better at highlighting the difference between the open and the close.

The above chart shows the same exchange-traded fund (ETF) over the same time period. The lower chart uses colored bars, while the upper uses colored candlesticks. Some traders prefer to see the thickness of the real bodies, while others prefer the clean look of bar charts.

Candlesticks are created by up and down movements in the price. While these price movements sometimes appear random, at other times they form patterns that traders use for analysis or trading purposes. There are many candlestick patterns. Here a sampling to get you started.

​A bearish engulfing pattern develops in an uptrend when sellers outnumber buyers. This action is reflected by a long red real body engulfing a small green real body. The pattern indicates that sellers are back in control and that the price could continue to decline.

​An engulfing pattern on the bullish side of the market takes place when buyers outpace sellers. This is reflected in the chart by a long green real body engulfing a small red real body. With bulls having established some control, the price could head higher.

​An evening star is a topping pattern. It is identified by the last candle in the pattern opening below the previous day’s small real body. The small real body can be either red or green. The last candle closes deep into the real body of the candle two days prior. The pattern shows a stalling of the buyers and then the sellers taking control. More selling could develop.

​A bearish harami is a small real body (red) completely inside the previous day’s real body. This is not so much a pattern to act on, but it could be one to watch. The pattern shows indecision on the part of the buyers. If the price continues higher afterward, all may still be well with the uptrend, but a down candle following this pattern indicates a further slide.

The bullish harami is an upside down bearish harami. A downtrend is in play, and a small real body (green) occurs inside the large real body (red) of the previous day. This tells the technician that the trend is pausing. If it is followed by another up day, more upside could be forthcoming.

A bearish harami cross occurs in an uptrend, where an up candle is followed by a doji. The doji is within the real body of the prior session. The implications are the same as the bearish harami.

A bullish harami cross occurs in a downtrend, where a down candle is followed by a doji. The doji is within the real body of the prior session. The implications are the same as the bullish harami.

Let’s look at a few more patterns in black and white, which are also common colors for candlestick charts.

This pattern starts out with what is called a “long white day.” Then, on the second, third and fourth trading sessions, small real bodies move the price lower, but they still stay within the price range of the long white day (day one in the pattern). The fifth and last day of the pattern is another long white day.

Even though the pattern shows us that the price is falling for three straight days, a new low is not seen, and the bulls prepare for the next move up.

A slight variation of this pattern is when the second day gaps up slightly following the first long up day. Everything else about the pattern is the same; it just looks a little different. When that variation occurs, it’s called a “bullish mat hold.”

The pattern starts out with a strong down day. This is followed by three small real bodies that make upward progress but stay within the range of the first big down day. The pattern completes when the fifth day makes another large downward move. It shows that sellers are back in control and that the price could head lower.

As Japanese rice traders discovered centuries ago, investors’ emotions surrounding the trading of an asset have a major impact on that asset’s movement. Candlesticks help traders to gauge the emotions surrounding a stock, or other assets, helping them make better predictions about where that stock might be headed.

How Do BitTorrent Sites Like The Pirate Bay Make Money?

For GE’s Larry Culp it’s all about the art of managing...

How Do Gross Profit and EBITDA Differ?

Commentary: Navigating the evaporating protections in the private debt market