The Dow Jones Industrial Average is on course to close Friday with its worst weekly losses of the year as trade uncertainty continues to spook investors.

Matt Maley, equity strategist at Miller Tabak, has some advice for those concerned over these wild market swings.

“The old saying people would say [is] “don’t just stand there, do something.” When volatility picks up, you do just the opposite — “don’t just do something, stand there.” But, while you’re standing there, get a list of the stocks you like and the levels you like them at,” Maley said Thursday on CNBC’s “Trading Nation.”

For those seeking shelter, Maley says Dow stock UnitedHealth is one name that offers some protection in a volatile market.

“It got hit before the rest of the market did when this ‘Medicare for All’ situation hit and then the stock has bounced back nicely here,” said Maley. “This week as the market has seen the biggest decline that it has all year, UnitedHealth has actually rallied 3%.”

UnitedHealth’s outperformance this week comes off a low bar. The stock has trailed the market, holding in a correction even as the S&P 500 climbed to new highs at the beginning of May.

Still, Maley sees its recent strength as the beginning of a stronger breakout.

“It has made a lower high so if it can rally a little bit further, it will make a higher high and move above its multimonth trendline so that would be quite positive for the stock,” said Maley. 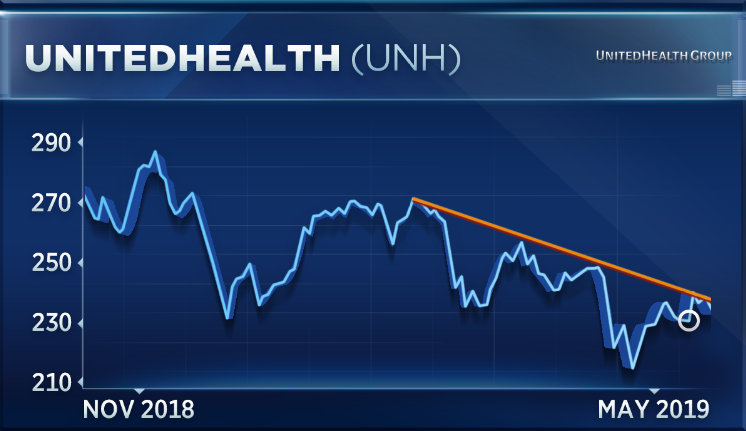 The key when investing in volatile markets is finding stocks with strong growth stories that have been “unfairly punished by short-term market noise,” says Mark Tepper, president at Strategic Wealth Partners. He likes cloud computing and software as a service in this environment, and one Dow stock fits the bill.

“When it comes to cloud computing, we like Microsoft. They are growing their cloud business by over 40% annually and they offer this hybrid solution that’s interesting to lots of businesses that had invested a lot of money into internal IT infrastructure in the past,” Tepper said during the same segment.

Microsoft has soared above the rest of the market this year, rallying 23%, double the Dow’s advance. It has bounced 33% off a late December low.

“If you stick with companies whose growth stories are less impacted by market noise, you’re going to do well,” said Tepper.

8 things we learned at #MBATech18

Iraq has not reached agreement with Exxon on southern oilfields -oil...

How to Win in Business and Life

How can I obtain a telex release for a Bill of...

The Amazon Effect on the U.S. Economy