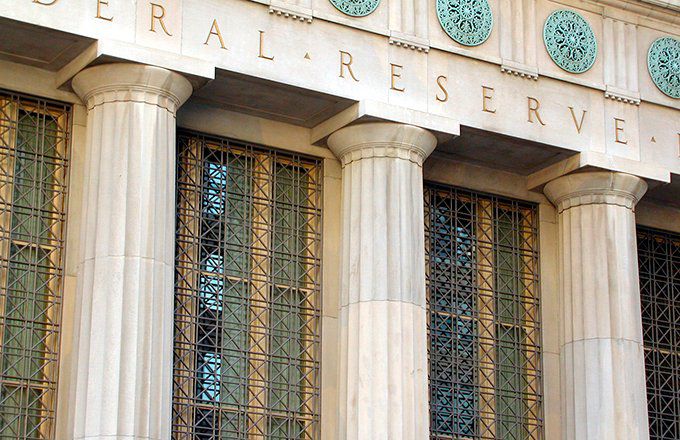 The Federal Reserve is the central bank of the United States and is arguably the most influential economic institution in the world. One of the chief responsibilities set out in the Fed’s charter is the management of the total outstanding supply of US dollars and dollar substitutes. The Fed is responsible for creating or destroying billions of dollars every day.

Despite being colloquially charged with running the printing press for dollar bills, the modern Federal Reserve no longer simply runs new paper bills off of a machine. Some real dollar printing does still occur (with the help of the U.S. Department of the Treasury), but the vast majority of the American money supply is digitally debited and credited to major banks. The real money creation takes place after the banks loan out those new balances to the broader economy.

The Federal Open Market Committee (FOMC) and associated economic advisers meet regularly to assess the US money supply and general economic condition. If it is determined that new money needs to be created, then the Fed targets a certain level of money injection and institutes a corresponding policy.

It’s hard to track the actual amount of money in the economy because many things can be defined as money. Obviously, paper bills and metal coins are money, and savings accounts and checking accounts represent direct and liquid money balances. Money market funds, short-term notes, and other reserves are also often counted. Nevertheless, the Fed can only approximate the money supply.

The Fed could initiate open market operations, where it buys and sells Treasurys to inject or absorb money. It can use repurchase agreements for temporary expansions. It can use the discount window for short-term loans to banks. By far, the most common result is an increase in bank reserves.

In the early days of central banking, money creation was a physical reality; new paper notes and new metallic coins would be crafted, imprinted with anti-fraud devices, and subsequently released to the public (almost always through some favored government agency or politically connected business).

Central banks have since become much more technologically creative. The Fed figured out that money doesn’t have to be physically present to work in an exchange. Businesses and consumers could use checks, debit and credit cards, balance transfers, and online transactions. Money creation doesn’t have to be physical, either; the central bank can simply imagine up new dollar balances and credit them to other accounts.

A modern Federal Reserve drafts new readily liquifiable accounts, such as US Treasurys, and adds them to existing bank reserves. Normally, banks sell other monetary and financial assets to receive these funds.

This has the same effects as printing up new bills and transporting them to the bank vaults, only it’s cheaper. It is just as inflationary, and the newly credited money balances count just as much as physical bills in the economy.

The Federal Reserve Bank must destroy currency when it is damaged or fails its standard of quality.

Suppose the U.S. Treasury prints $10 billion in new bills, and the Federal Reserve credits an additional $90 billion in readily liquifiable accounts. At first, it might seem like the economy just received a monetary influx of $100 billion, but that is actually only a very small percentage of the actual money creation.

This is because of the role of banks and other lending institutions that receive new money. Nearly all of that extra $100 billion enters banking reserves. Banks don’t just sit on all of that money, even though the Fed now pays them 0.25% interest to just park the money with the Fed Bank. Most of it is loaned out to governments, businesses, and private individuals.

The credit markets have become a funnel for money distribution. However, in a fractional reserve banking system, new loans actually create even more new money. With a legally required reserve ratio of 10%, the new $100 billion in bank reserves could potentially result in a nominal monetary increase of $1 trillion.

Bitcoin Cash Price | Brian Kelly Shows His Confidence in the...

Britain Confiscates $700,000 in Bitcoin from Hacker

What happens when you don’t respond to social media comments

Senate OKs GOP Tax Cuts; These Companies Are Celebrating The Most

The Push to Make Financial Literacy into Law